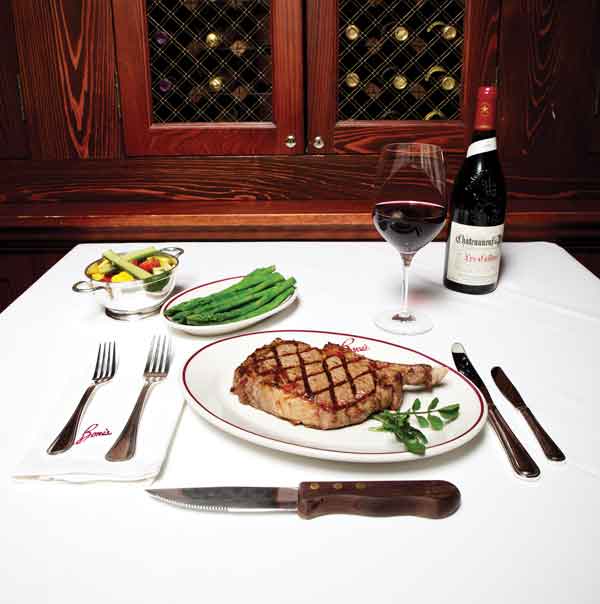 I left Atlanta for a few years in early 2006. A week before my departure, another food critic in town reached out and said, “Let me treat you to dinner. Name the place.”

I had already splurged on farewell meals at Seeger’s, Joël, Soto, and the Dining Room at the Ritz-Carlton, Buckhead—not because of any prescient notions that Guenter Seeger, Joël Antunes, and Sotohiro Kosugi would soon leave the city, or that the Dining Room would close not long after I returned in 2009. I just knew how much I’d miss the marvels those restaurants served. So for this final dinner, I wanted an institution that honored Atlanta’s Southern marrow but also fed off its appetite for prestige and success. “Let’s go to Bone’s,” I said.

What I remember about that evening at Buckhead’s most venerated steakhouse was the rhythm—the synchronized swing of the valet taking our keys, the host steering us through the grainy dimness to a downstairs table, the server muscling out the cork of an earthy Rhône, and the corps of staff triple­stepping around our table, placing and removing plates with a cadence to which we could almost bop our heads. Our meal wasn’t at all rushed, but it had momentum. Cold seafood salads segued into the carnal revelry of pink-red meat, wantonly seasoned and charred, and a whirl of creamy, starchy sides. We each managed a couple bites of pecan pie at the end in honor of Georgia. It was a grand, appropriate send-off.
I returned to Bone’s several months ago for a weekday lunch—my first visit since moving back. The interior hadn’t changed a lick. In the daytime, though the dining rooms remain dusky, it’s easier to make out the famous, fading caricatures that decorate the walls. I spotted Ted Turner’s likeness but soon gave up trying to identify women drawn with feathery Farrah Fawcett hairstyles. Parties of thirty- and forty-something men in ties dominated the restaurant, their suit jackets hung on the backs of chairs as they assailed their New York strips.

Yes, Buckhead stereotypes incubate here. But the restaurant certainly isn’t exclusionary. At subsequent dinners, I witnessed more racially diverse crowds—with larger numbers of women and families—than I ever saw before.

It oversimplifies matters to tag Bone’s as merely a time capsule. It evolves at its own pace, as it pleases. Susan DeRose and Richard Lewis opened the restaurant in 1979. The couple also own OK Cafe and Blue Ridge Grill, both in west Buckhead, but Bone’s is their magnum opus that continues to draw regular attention from local and national press. They run the place from behind a shroud of oldfangled mystique. DeRose and Lewis aren’t big, omnipresent personalities working the floor, and they eschew conferring celebrity status on any of their chefs. They leave the hospitality in the hands of their ace managers and servers, many of whom have worked at Bone’s for decades.

And in an era when many restaurants practically provide dossiers on the farmers and purveyors with whom they partner, the management of Bone’s refuses to reveal which companies supply its beef, calling it proprietary information. (Having worked as a critic in Dallas, where the many excellent steakhouses gladly disclose their meat sources, I find the secrecy quirky.)

But Bone’s rolls with trends, too. On a menu that follows the code of chophouse dining to the letter, an entree such as sauteed wild salmon—cooked to an exact medium-rare, just like a steak—over white beans and bacon can seem downright progressive. Bourbon lovers will note that the bar carries several vintages of current cult favorite Pappy Van Winkle, including the prized 23-Year-Old Family Reserve.

But the most attention-grabbing addition to the beverage program is a cadre of iPads programmed with the restaurant’s list of 1,350 wines, which is searchable by varietal, region, price, or label and provides links to detailed reviews. The iPad wine list, introduced last year and popular in tech-savvy cities such as San Francisco, boosted sales immediately. This dinosaur refuses to fossilize in the digital age.

I’m a steakhouse traditionalist, so before the vino, I want a straight-up gin martini, slightly dirty, which Bone’s garnishes with blue cheese–stuffed olives. The icy, briny shiver from the cocktail pairs so well with a lump crab salad with remoulade and cocktail sauces—or, better yet, with beef carpaccio as soft as room-temperature butter, scattered with arugula for peppery contrast and Parmesan for salty nip. I much preferred those to the crab and avocado salad: Shredded crab came formed in a patty, like an uncooked crab cake, over leathery mesclun greens. If it’s a celebration, start with the chilled seafood platter—shrimp, lobster, and cracked Alaska king crab legs arranged over ice, a classic extravagance.
Lamb chops, a veal chop with mushrooms, and a mixed grill featuring pheasant sausage embellish the selections of meats. Tempting, but for me, Bone’s equals beef. And what I crave with animal lust is the dry-aged bone-in rib-eye. At $65, it is the most expensive solo cut, but I’d scrimp to savor this charred beauty. Its tang and smoke linger with a complexity that borders on nostalgia, like a childhood memory of campfire. It is steak magnified and exalted.

The New York strip comes in at a respectable second, its sizzling exterior giving way to a silky interior, with plenty of juicy, mineral smack. A bone-in filet mildly disappointed. The idea behind this statuesque cut is that the bone adds extra flavor to filet mignon, which can register as slightly bland beyond its plush consistency. This one didn’t get much boost; filet fans should stick with the exemplary boneless version.

And for accompaniments? I appreciate a righteous baked potato, which the restaurant cooks crusted with sea salt. The seasonings in the grit fritters make them taste like deep-fried onion dip, and I mean that as a compliment. Lately the restaurant has been running smoky collards as a special; they’re not as long-simmered as you’d find in a soul food joint but are still cooked enough to sate the Southern palate.
If you’re craving onion rings, consider sampling them on the side of the burger at lunch. In an era of burger schizophrenia—thin patties or thick, Kraft singles or Gorgonzola, homemade bread-and-butter pickles or Vlasics from the jar—this two-fister sings of America, with a surface so gutsily seasoned and seared it actually tastes like chopped steak.

This is timelessness in the best possible sense. Given the chance to rethink that final meal, I’d still bask in the Bone’s definition of Atlanta. It remains, three decades strong, the city’s finest chophouse. —Bill Addison

Photograph by Christopher T. Martin. This review originally appeared in our May 2011 issue.