Atlanta restaurants have style. They look better than any other American city’s. Not that other cities don’t care about decor, but few show the same care with design—from the sweeping rooms to the bars that go on for days to the art on the walls to the bric-a-brac in nooks that could pass for dioramas.

At Le Fat, Guy Wong’s new Vietnamese restaurant, the design, inspired by the French colonial era, hits you the minute you walk in. The vintage signs convey an ornate Eurasian elegance, and the two rooms are painted the cool colors (particularly a muted green with pops of red) you find where it’s hot. The first room, which calls to mind the salon of a grand hotel, features a bar serving warm-weather cocktails with housemade tinctures, essences, and fruit extracts. The walls are hand-painted with magnolia trees, big pink blossoms, and colorful birds against a celadon ground; it could be the chintz from a long-ago consulate.

Atmosphere—midcentury chansons pop up on the playlist, and though there are no languid ceiling fans, you feel them anyway—is what Le Fat has to offer, along with relaxed but efficient service from the most diverse staff, including servers and managers, that I’ve seen at an Atlanta restaurant. The food, though, is mostly notional; by that I mean it’s more an idea of what Vietnamese cuisine is than the closest you can come to it in the city, which is along Buford Highway.

There are plenty of “classics” on Le Fat’s menu—pho, naturally; the rice noodle salad bun; the rice bowl com—and standard Vietnamese sauces, herbs, and garnishes. But the soul of the restaurant feels much closer to Wong’s Cantonese heritage on his father’s side than to his mother’s Vietnamese background. The flavors are lullingly familiar from Chinese restaurants—dishes slicked with a starch-thickened brown “chef’s special sauce,” making many of them taste the same, which is to say like generic takeout. If you’ve missed thick, pale yellow, somewhat mucilaginous egg drop soup, you’ll find it here, in a version with crab and canned white asparagus called sup mang cua. (As for the restaurant’s name, it’s Chinese, Wong explains: one of three names for his four-year-old son, who merrily tears around the space as the staff sets up for lunch. It’s derived from a word meaning “prosperous,” not “rotund.”)

At its best, the food at Le Fat is fresh with the bright taste of green herbs and peppers that characterize Vietnamese cuisine, and even comforting. But order with care. Unmemorable is one thing, sloppy another. I had given up on the poultry—the rotisserie half chicken was dry and flavorless, and the chicken in a clay pot was rubbery, despite its handsome red hue—until I found the curry chicken, in a “Madras hot curry” sauce so gentle a child would be pleased. The “flash-fried” branzino (a bass relative) with just a cornstarch coating, though, was almost chokingly dry, with barely enough ginger-soy jus. “Salt and pepper” calamari was really just salt, and needed more of the Vietnamese spices and the spicy house mayo. Lump crab with pappardelle-wide egg noodles (unlike all the other noodles, which are rice) was so slathered in oyster and soy sauce that its flavor was lost, and a similar brown goo drowned the braised eggplant and tofu.

Before I beat up on other dishes, nothing is actively objectionable, and the prices are so low that you can forgive a lot. They might not quite be Buford Highway cheap, but $15 or so buys you most of the “classics” and “mains.” For that you get ample, family-friendly portions and noteworthy service in a very handsome setting.

And there’s plenty to like that requires no forgiveness at all. Summer rolls were impeccably fresh, the nubs of marinated pork, sliced shrimp, and spearmint leaves visible through the translucent rice paper wrappers. (For vegetarians, the kitchen will gladly make some without protein.) The refreshing papaya salad, with mango, Granny Smiths, and pickled carrots and daikon, came dressed with components that appear throughout the menu: fish sauce, sugar, cilantro, and Vietnamese mint. Here, all were held in check, and the effect was invigorating. Wonton dumplings, filled with diced shrimp and pork in a moist, prettily crumpled wheat-flour wrapping, tasted of sesame and chili oil and a sweet soy vinaigrette—it’s sheer comfort food, as if a Chinese (not Vietnamese) mother saw you coming through the door and pulled the ingredients out of the fridge. But the standout dish on the menu was a starter of mussels in a lemongrass broth, mounted with the high-fat butter Plugrá and served with grilled baguette planks to sop up the broth.

“Classics,” though, had little of the verve of those dumplings and mussels. It’s hard—impossible—not to be satisfied by noodles in a strong beef broth, and so the pho was satisfying. But it seemed perfunctory. The beef broth was disappointingly one-dimensional, and then the next night, it had a chemical aftertaste that suggested bouillon cubes. Com was an unmolded bowl of sticky jasmine rice, with lettuce and cucumber on the side that looked as if it had come from a school cafeteria and with very little flavor in the proteins. Better to go for the aforementioned chicken curry, that homey stew with big chunks of potato and carrot and a starchy beige sauce that could be the filling of a pot pie.

If anything on Le Fat’s menu rises to the level of distinctive, it’s the desserts, thanks to young pastry chef Derek Van Cleve, who comes from Wong’s flagship, Miso Izakaya. Van Cleve makes his own pastry, and it’s evident from the first plunge of your fork: a tender, buttery crust filled with white peaches cooked to a jam; big, fresh squares of puff pastry layered with piped raspberry cream; a square ramekin of not-too-sweet chocolate custard with ground almonds for texture and a thin caramelized sugar crust that lets him call it a crème brûlée. For a brief shining moment, Van Cleve was even hand-rolling croissants, pains au chocolat, and even little loop-ended squares of custard-filled danish. Just as I was getting set to conduct a taste-off with my Atlanta pastry standard, the Little Tart Bakeshop, they were gone. (Breakfast sales weren’t going well, apparently, maybe because they open at 11.) Come back, croissants!

Good to know
Le Fat’s interior is the work of designer Smith Hanes, who also worked on some of Ford Fry’s restaurants (including the Optimist, just up the street). 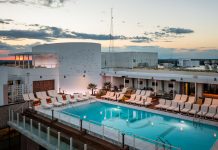