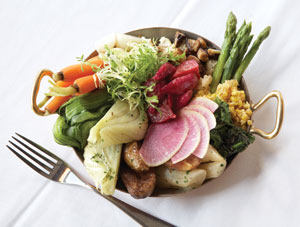 Among the forty-four dishes listed on an April menu at Restaurant Eugene, my eyes came to rest on a description that roused my curiosity: “Roasted shad roe, onion puree, lime pickle butter.” An uninitiated tablemate cocked his head quizzically when this plate arrived at the table. No way around it: Shad roe is one of nature’s uglier handiworks. A lobe of tiny eggs from the notoriously bony shad fish that runs briefly through the mid-Atlantic rivers in spring, the roe looks like a bloody horror-flick prop when raw and turns an unappealing gray when cooked. Yet this fleeting prize is sublime in flavor, offering a mild but hardscrabble pungency that suggests freezing water, upstream struggle, and the funkier nuances of caviar. Matching it with lime pickle butter tamed its feral qualities and evoked two distinct cuisines: Pickles are a staple in the South, but the triple hit of brine, heat, and citrus tasted undeniably of an Indian condiment. What an ingenious collaboration.

The shad roe stood out as an especially dazzling feat among many highlights over three recent meals that all illustrated how much Restaurant Eugene and its chef/owner, Linton Hopkins, have evolved in the last five years. Buckhead’s moneyed and mature crowd immediately embraced Eugene when it opened in 2004, offering them a concise, frequently changing, and generally conservative menu of New American dishes with regional overtures. It may have been enough to sustain the restaurant for a good long time.

An Atlanta native, Hopkins named the restaurant after his grandfather, a Tennessean who grew up on a farm and cooked frequently for his family. After sixteen months or so in operation, Hopkins began to retune Eugene’s cooking style, drawing on his heritage in earnest. He developed close relationships with local farmers and experimented with gussying up traditional regional dishes—at a time when few Atlanta fine-dining restaurants venerated Southern cooking. Soon he established a three-course Sunday Supper menu for $29.50. Its weekly centerpiece remains the fried chicken—browned in a combination of oil, lard, butter, and bacon renderings—inspired by Mary Randolph, the author of the 1824 cookbook The Virginia Housewife. And last year, in the space opposite Eugene, Hopkins and his partners opened Holeman and Finch Public House, a gastropub whose food, accompanied by smashing cocktails, illuminates the connection between Southern and British cooking. His gambles to celebrate and explore his culinary birthright have reaped awards: This year, Hopkins has been nominated—for a second time—as Best Chef Southeast by the James Beard Foundation, and he was named one of 2009’s Best New Chefs by Food and Wine magazine.

The myriad accolades, and the public’s support of Holeman and Finch’s adventurous nose-to-tail cooking philosophy, seem to have liberated Hopkins, allowing him to take his firstborn in playful and unrestricted new directions. As Hopkins tells it, he and his wife, Gina (who manages the restaurant’s intelligent wine program), came to dine at Restaurant Eugene early in the year and felt constrained by the succinct menu’s lack of options. He and Eugene’s chef de cuisine, David Bies, concocted a solution that goes fantastically overboard: a menu of more than forty dishes, dominated by small plates and divided into three sections that focus on vegetables, seafood, and meat and game. Folks attached to the restaurant’s former approach can still pluck out appetizers and entrees—silky Charleston crab soup poured tableside over jumbo lump crab, for example, followed by a skillet-roasted dry-aged rib-eye with potato gratin. Really, though, the kitchen now clearly aims to coax diners toward shared small plates and their whirligig of ingredients and preparations.

Where on this feverishly unwieldy menu to begin? Simply, perhaps, with French radishes garnished traditionally with fleur de sel and clean-tasting butter. (Note: The menu never, ever stands still. Even this uncomplicated dish changed in the course of one week—first with a side of herbaceous radish pistou, then without. Both charmed.) From there, it’s up to your predilections: Most servers will encourage you to order piecemeal, two or three dishes at a time. I leaned toward the customary progression of lighter to heavier. One meal kicked off with marinated, uncooked fluke dressed with rivulets of blood orange juice, jalapeño, and shaved fennel; segued to butter-poached lobster with orange mustard and fried sage (a later switch to tarragon more graciously complemented the lobster); graduated up the food chain to crisp, lusciously salty duck confit over blushing sea island red peas with apple for juicy contrast; and peaked with sliced porchetta (a Tuscan method of roasting richly seasoned pork) flanked by an earthy duo of cauliflower and shiitakes.

Another night, I lingered over the vegetable offerings, most of which are prepared to proudly flaunt their clear, sometimes strong flavors. Thin spears of little gem lettuce came splotched with sheep’s milk yogurt—a study in enjoyable sourness that its adornment of the Spanish anchovies called boquerones further accented. House-made cow’s milk ricotta added a luxe touch to thumbnail-size sunchoke agnolotti. Smoked trout roe, caramelized on the surface but which still popped in the mouth, gave the licorice aspects of roasted baby fennel an unusual radiance. Turnip gratin proved a lovely sidekick to meatier dishes such as pheasant two ways (roasted and made into a complex sausage) and sweetbreads served with peppery arugula pesto and a poached egg sexily oozing its yolk.

This changeover must be murder on the kitchen staff, but remarkably few disappointments appeared. A confit of cod shone less brightly than other fish treatments and concealed soggy bits of fingerling potato underneath. Sweets—along the lines of smoked chocolate mousse (weird but rather delicious, too) and buttermilk cream pie domed with meringue—also included a dessert billed as an inventive-sounding chocolate “popover.” Bummer: It was essentially a conical-shaped chocolate cake, though piercing mint ice cream and house-preserved cherries alongside mitigated the letdown. And in the glow of this enlightened and intrepid shift in course, the formality of the dining room feels . . . well, not stodgy, but certainly not as jaunty as the food. The skilled servers, too, retain a sense of formality: They may relax as word of the small plates brings in an entire new generation of Restaurant Eugene devotees. And fans will appear, all right. In five years, Hopkins has grown from a competent fine-dining chef to one of the driving minds behind Atlanta’s reclamation of Southern gastronomy. I can’t wait to taste where his restless imagination takes our dining scene next.

Originally published in the June 2009 issue of Atlanta magazine