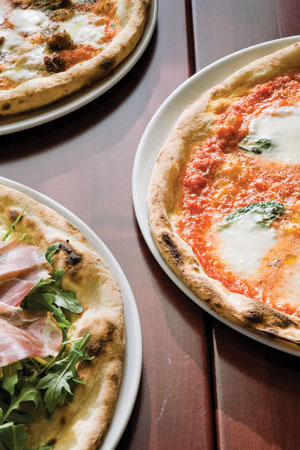 I have, over years of searching for transcendent pizza, developed a quirky progression when I tackle a whole pie. I always begin by ripping off a substantial crescent from the pizza’s brim the moment it arrives. The crust’s appearance and flavor, unadulterated by other ingredients, tell its own complete story.

Crusts may range from wafer-like flatbread to fulsome-lipped Chicago deep-dishers, but I’m forever praying to find the middle-path crust—properly fermented dough, stretched to taut but not crackery thinness, which has spent just enough time in a ferociously hot oven to develop a crisp-chewy bite, complex taste, and come-hither scorching. (Pizza aesthetes debate the intangibles and nuances endlessly. For the record, I join many others in naming the miraculous Neapolitan–New York hybrid pies at Pizzeria Bianco in Phoenix, Arizona, as my favorite in America.) Only after geeking out on the universes discernible in a pizza crust do I then move on to consuming a proper slice.

Performing this ritual with the Nana’s, the house special pizza at Varasano’s in south Buckhead, I start by appreciating the handsome polka dots singed across the wedge of dusky beige crust. The texture has a crisp snap but feels substantial in the mouth. It’s deeply satisfying, as is the smoky tang that becomes more pronounced as the piece cools.

Now I turn my attention to the rest of the pie—the concentrated, herb-speckled sauce on this particular creation, and the way it melds with a lacy veneer of mozzarella. Crunch, squish, ooze, mmm. Over several review visits, the Nana’s and other variations at Varasano’s have been more and more rewardingly attuned. This may well be the finest pizza in Atlanta.

Our pizza-challenged city whipped up a flabbergasting amount of buzz around this restaurant, mostly from the hype and mystique perpetuated by owner Jeff Varasano. A native New Yorker, Varasano moved to Atlanta more than a decade ago, bemoaned the city’s lack of worthy pizza, began deciphering its mysteries in his home kitchen, and penned a pizza-making doctrine online that sparked widespread notice from aficionados and the media. He settled on a dough fashioned from a sourdough starter and, in what has become legend, jerry-rigged the latch on his oven’s self-cleaning mode so he could access the highest possible baking temperatures.

When his software engineering career reached a crossroads last year, he decided to leap into the restaurant industry. The sneak-peak tasting parties held at Varasano’s house in the months before the restaurant’s opening not only wooed would-be investors but fueled ingenious word-of-mouth and anticipation.

Jeff Varasano’s ascension as pizza guru enthralls as a backstory, but it can also distract from the reality of the brick-and-mortar (or, in this case, glass-and-stucco) business and distort expectations: The restaurant offers a fairly straightforward experience. Ensconced on the ground floor of the new Mezzo Atlanta building, the dining room is a rudimentary mix of red walls, faux-vintage posters, tables, booths, and a modest patio, with a friendly little bar space in the front and an open kitchen in the back dominated by the large, tiered, electric Pizza Master oven imported from Sweden. (Varasano had hoped for a brick oven, but the building zoning wouldn’t allow it.) One subtle, welcoming touch: As you walk to the restaurant, a host or hostess awaits your arrival and opens the door for you.

Many first-time customers, I think, expect to see Jeff Varasano in the kitchen, tossing dough in the air. But Varasano instead works the floor, pulling up chairs to gab with customers and occasionally demonstrate his prowess with a Rubik’s Cube that, as a teenager, won him his first bout of fame.

When I asked him in a phone interview why he isn’t making the pizzas himself, he said bluntly, “It’s not my thing.” (Not that he isn’t consumed by the quality of the pies—more on that in a bit.) Thankfully, after a few fitful opening weeks when his recipes were adjusted for larger-scale production, his cooks now wrangle a mostly reliable product. Sometimes the edges are downright blackened in places, but there’s a goodly amount of real estate to these personal pies, so it seems acceptable to have a bit of crust sacrificed for the good of the whole.

Of the nine pizzas on the menu, the concoctions made without tomato sauce outnumber those made with, but try both. A combination of caramelized onions and Emmenthaler strays far from Italian convention but is masterfully conceived: The shellac of piquant cheese bonds with the crust to keep it extra crisp. The Nucci comes with the same Emmenthaler base but is finished, post-baking, with olives, a fluffy wig of arugula, and wispy ribbons of the Italian ham called capocollo. The New Haven–style clam (which can be made either “white” or “red”; choose white) vibrates with garlic. I wish at least some of the clams were left whole rather than minced, but I still return for a third slice.

I’m not as quick to stuff myself on the Salumi. Its layers of peppery cured meats never quite meld with the other toppings of mozzarella, tomato sauce, and spiced olives. And the calzone needs serious work: The dough seizes as hollow and stiff as papier-mâché around its pepperoni, sun-dried tomato, and cheese fillings.

If you’re after the acidic kick of tomato, go for the aforementioned Nana’s, or the margherita. Don’t be scared off when you receive an emphatic speech from a worried server that goes something like this: “Just so you know, the margherita is made in a traditional Neapolitan style and it’s a little soupier in the middle than our other pizzas, but it’s delicious!” Complaints about lack of crisp crust when the restaurant first opened instilled fear in these folks. And while its center can get soggy toward the end, I love the gentle sweetness of the margherita—particularly when dotted with gorgeous, milky blobs of optional buffalo mozzarella.

As for the rest of the menu? It’s all serviceable: unimaginative, if fresh, salads. A snooze of a salumi platter. A wine list skewed too heavily to California. The bubbly staff like to talk up the fried doughnuts for dessert, but if you want more dough, order the dessert pizza slaked with fontina and flecked with rosemary, walnuts, and molten dates. I don’t expect the meal’s peripheral elements to improve any time soon: Jeff Varasano remains single-mindedly fixated on improving the pizza. He hyped his product; he wants it to be world-renowned.

But it sounds like perfectionism can be hard on a fellow. When I mentioned during our phone chat how much I had enjoyed my most recent meals at his restaurant, he sighed. “We’re going to be serving a lot better pizza soon,” he said. “This is a continuous process.” —Bill Addison

Photograph by Iain Bagwell. This review originally appeared in our July 2009 issue. 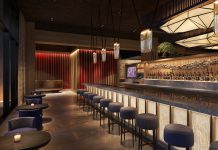