A trio of barrier islands hugging North Carolina’s Atlantic coast, the Outer Banks was the setting of many historic firsts. Centrally located Roanoke Island was the site of England’s first settlement in the New World. Founded in 1585 under the authority of Sir Walter Raleigh on behalf of Queen Elizabeth I, the colony preceded Jamestown by twenty-two years. To the north lies Bodie Island, home to popular vacation communities including Nags Head, Kitty Hawk, and Kill Devil Hills, where the Wright brothers first took flight in 1903. To the south is quieter Hatteras Island, an ideal location for exploring America’s first national seashore, established in 1953, as well as other natural treasures, such as Pea Island National Wildlife Refuge, home to enormous flocks of migratory birds and nesting sites for several sea turtle species.

Capt’n Franks Hot Dogs
When Harvey Hess Jr. opened his Kitty Hawk hot dog stand in 1975, its only neighbors were sand dunes and sea oats. Forty years have brought plenty of changes to the area, but hungry beachgoers can still enjoy the signature Snap Dog, made locally with grass-fed beef and pork in a natural casing. Classic rock tunes and kids’ meals served on souvenir Frisbees add to the fun.

Wright Brothers National Memorial
On December 17, 1903, along a sandy expanse in Kill Devil Hills, brothers Wilbur and Orville Wright achieved the first successful airplane flights. Visitors to this National Park Service memorial may view a full-scale reproduction of the Wright Flyer, stand on the spot where the brothers first took to the air, and hike to the six-story art deco–inspired granite monument atop Big Kill Devil Hill.

The Bird Store
With nearly 400 avian species living in or migrating through the islands, birding is big in the Outer Banks. For almost thirty years, Philip and Susan Harvey have honored this natural legacy at their expertly curated art gallery in Nags Head. Seasoned collectors and souvenir hunters alike will be impressed by the selection of carved shorebirds, antique decoys, and seashore prints by local artists.

The White Doe Inn
The 1910 late Queen Anne–style home, the largest residence on Roanoke Island, is undeniably grand. The guest rooms, featuring antique furnishings and bedside fireplaces, are gracious and plush. But it’s innkeepers Bebe and Bob Woody, retired U.S. National Park Service rangers, that make this inn in Manteo so special; their sixty-plus years of experience welcoming the public and intimate knowledge of the area mean you won’t find finer hosts.

The Elizabethan Gardens
This unexpected oasis of shade trees and flowering plants in Manteo was inspired by the elaborate English gardens once enjoyed by Queen Elizabeth I and her court. Highlights include statues of Her Majesty and Virginia Dare, the first child born of English parents in America; an ancient oak believed to have been alive when the first English colonists landed here in 1585; and a rose from the royal garden at Windsor Great Park given by Queen Elizabeth II.

The Lost Colony Outdoor Drama, Manteo
Discover the story behind the founding and disappearance of Roanoke Colony at the longest-running outdoor drama in the nation. First staged in 1937, the large-scale production is performed nightly (except Sundays) from Memorial Day weekend through mid-August on the banks of Roanoke Sound in Manteo. Enjoy a little sixteenth-century banter at pre-show cast dinners with Queen Elizabeth, Sir Walter Raleigh, and Chief Manteo.

The Inn on Pamlico Sound
Innkeeper Steve Nelson wows guests of his intimate Buxton establishment with a slate of amenities you’d expect at a major resort: complimentary kayaks, paddleboards, and bikes; a 24-hour pool; a private dock; and a fourteen-seat theater. Plan on dinner (as well as breakfast) at the inn’s elegant Cafe Pamlico, where dishes feature fresh seafood, fork-tender steaks, and fruits and vegetables grown on the property.

Graveyard of the Atlantic Museum
Over the course of the last 400 years, hundreds of ships (some say thousands) have sunk in the treacherous waters off the coast of the Outer Banks, dubbed the Graveyard of the Atlantic. Learn about the strong currents, hidden shoals, and powerful storms that contributed to the tragedies, as well as the myriad ships that met their fates along these shores at this Hatteras museum. 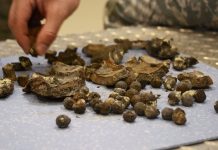 Atlanta Must Reads for the Week: DNA’s false promise, Georgia’s ‘Hurt Locker,’ and the human cost of elephant tourism