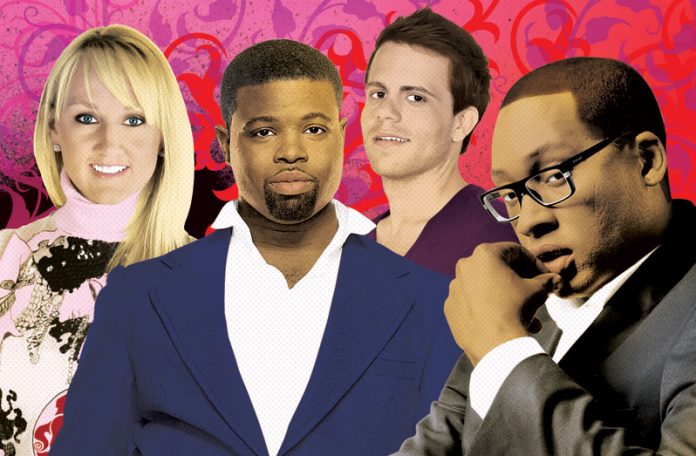 Some made it work. Others didn’t. Catch up with four Project Runway alums with ties to our corner of the South. The eighth season debuted this summer with ninety-minute episodes and Savannah contestant April Johnston.
Heidi Standridge Atlanta didn’t get a representative on the series until its second season on Bravo—and it didn’t go well. Eliminated second after her white muslin outfit fell short, the now married blond beauty runs her own bridal gown boutique in Midtown. Heidi Elnora, 1545 Peachtree Street, Suite 112, 404-903-4263, heidielnora.com
Mychael Knight The city saw a winner the next season with Knight, who came in fourth and won that season’s Fan Favorite award. Born in Germany and raised in Alabama, the Georgia Southern University alum got his start as a stylist in the Atlanta music scene, nudging clients toward his custom-made clothing when possible. He now has a fragrance, MAJK; an eponymous fashion line, entailing mostly dresses, that he premiered at Charleston Fashion Week this past spring; and an upcoming dress called the 2², which can be worn four ways. He’s still our most successful graduate of Runway. mychaelknight.com
Mitchell Hall The series’ first season on Lifetime got Hall, a SCAD dropout who hadn’t touched his sewing machine in three and a half years before auditioning for the show. Cut third, Hall is now fashion editor for South magazine and still works at Savannah’s BlueBelle Boutique.
Anthony Williams Last season, the judges had their fun with Atlanta’s Williams. They sent him packing in the middle of the season, only to bring him back the next episode after another contestant dropped out—only to eliminate him again the episode after when he flunked a circus-themed challenge. He finished fifth overall, but no matter: Williams designed the dress that Heidi Klum wore on this year’s April cover of Marie Claire, a stunning, one-shoulder, sky-blue piece. He’s now the W Atlanta-
Buckhead’s “style ambassador,” and the brazen designer’s future looks bright. anthonylwilliams.com
This article originally appeared in our September 2010 issue.
Advertisement