It took only one average dinner at a rather expensive cottage bistro that opened in the Crescent City last year to remind me: New Orleans isn’t New York, where restaurants open at such a fevered pace that serious eaters race between the latest luminaries for bragging rights. New Orleans’s best restaurants get even better over time, as chefs cultivate their style and niche and brilliance. And remarkably, the food scene not only recovered post-Katrina, it grew more robust: More restaurants exist now than before the 2005 storms. So consider this a more eclectic, personal survey. I’ve left out the most obvious choices—Commander’s Palace, Galatoire’s, Cafe du Monde for beignets—in favor of others that aren’t quite as famous but that memorably articulate the local culinary dialect, a heady stew of French, Spanish, African, Italian, and Southern American flavors that makes New Orleans one of the nation’s most compelling food towns. This tour does require a car or a pocketful of cab fare: I’m taking you well beyond the French Quarter.

» The buttery light spilling from Patois—located in a former po’boy shop in the verdant, heavily residential Uptown neighborhood—brings to mind a Parisian bistro, as does the comfortably snug dining room. And while dishes like moules frites (mussels in tomato broth with fries) and hanger steak may extend the Gallic comparison, chef and co-owner Aaron Burgau’s menu more often reflects an organic synthesis of national culinary trends and New Orleans fundamentals. Pork is used to frisky effect in a dessert of caramelized pain perdu with bourbon-bacon ice cream and candied pork belly, and country ham reduction delivers a pleasantly salty nip to paneed (pounded and breaded) rabbit over succotash. If you go for Sunday brunch, order the grits and grillades (earthy stewed beef), a classic Louisiana comfort food combination. 6078 Laurel Street, 504-895-9441, patoisnola.com

» If any prominent New Orleans restaurateur ever opens an outpost in Atlanta (which needs a world of help with its ideas about Cajun-Creole cooking), I place bets it will be celebrity chef John Besh, whose company operates seven ventures in the Crescent City and a second location of his brasserie, Lüke, in San Antonio. My favorite Besh restaurant remains Restaurant August, his tony flagship located in a former tobacco warehouse built in the 1800s and nestled among the office buildings in the Central Business District. Chef de cuisine Michael Gulotta oversees refined dishes like gnocchi tossed with blue crab and Périgord truffles, and an elegant courtbouillon (pronounced coo-bee-on), a Cajun seafood stew presented here with redfish, shrimp, and crab in an aromatic broth that brings to mind bouillabaisse. Consider splurging on the $82 degustation menu that might conclude with a “snowball” fashioned from bittersweet chocolate granita. 301 Tchoupitoulas Street, 504-299-9777, restaurantaugust.com

» Trying to define Creole and Cajun cooking and their differences is akin to what it would be like to live in one of M.C. Escher’s more complex prints: unending and labyrinthine. For the grossest of oversimplifications, let’s say that Creole refers to a more refined, urban version of Louisiana cuisine and Cajun to a more rustic. These sensibilities merge at Brigtsen’s, a funky spot near the edge of the Mississippi River. Frank Brigtsen, a protégé of Paul Prudhomme, dreamed up a special years ago of sauteed veal crowned with creamed spinach and fried oysters that was so over-the-top yet so right it remains one of my most cherished meals. These days look for shrimp remoulade with guacamole, rabbit in Creole mustard sauce, and scamp grouper with shrimp and corn maque choux, the state’s version of succotash. 723 Dante Street, 504-861-7610, brigtsens.com

» The starter of chilled corn broth speckled with citrusy crab and avocado salad this past July at Lilette brought back memories. I had tried the dish the first summer this ambitious neighborhood restaurant in the Uptown area was open, in 2001, and I never forgot how each cool slurp felt like an antidote to the sweltering temperatures outside. It still manages the same effect; I love that chef-owner John Harris revives signatures like these seasonally. Black drum—a mild, flaky-textured local fish we rarely see in Atlanta—is one happy constant on the menu. Stop in for a cocktail or glass of wine after dinner at Bouligny Tavern, Harris’s new midcentury modern gastropub, next door. Lilette, 3637 Magazine Street, 504-895-1636, liletterestaurant.com; Bouligny Tavern, 3641 Magazine Street, 504-891-1810, boulignytavern.com

» Leah Chase, now in her late eighties, has been the celebrated ambassador of Creole soul cooking for more than half a century. Her place in the Treme neighborhood, Dooky Chase (named for her father-in-law, who founded it in 1941), took a beating in Hurricane Katrina, and after reopening in 2006, it concentrates on lunch. On the $17.95 buffet or on the a la carte menu, expect to find some of New Orleans’s crispiest fried chicken along with specialties like shrimp Clemenceau (tossed with potatoes, mushrooms, and peas) and chicken Creole, a spicy tomato-based number studded with okra and green pepper. For dessert? Bread pudding, of course. 2301 Orleans Avenue, 504-821-0600, dookychaserestaurant.com

» Fried oysters crowned with melted Brie? Clancy’s opened in 1983, and a few of its dishes still reflect the fads of that decade. But it’s the timeless bistro specialties that make this out-of-the-way Uptown restaurant a favorite local secret. Crab shines, whether as the centerpiece of a salad flanked with greens, tomatoes, and hearts of palm; draped in béarnaise sauce over sauteed veal; or in the form of a smoked soft-shell crab. Linger over a bottle from the thoughtful wine list (hint: white Burgundy pairs exceptionally well with crab). 6100 Annunciation Street, 504-895-1111, clancysneworleans.com

» Some New Orleans aficionados brag of po’boy finds deep in nontouristy neighborhoods; I join the ranks of many others who proudly love Parkway Bakery and Tavern, which is a fifteen-minute drive from the French Quarter but has landed on the national radar enough that the Obamas stopped in last summer. Jay Nix revived the flagging business early last decade, serving quintessential NOLA subs stuffed with shrimp, oysters, and roast beef dripping with gravy in a clean, bustling room. 538 Hagan Avenue, 504-482-3047, parkwaybakeryandtavernnola.com

» Mahony’s Po-Boy Shop owner Ben Wicks is an anomaly, a fine-dining chef who dropped out of the upscale rigmarole to master the art of po’boys. He serves all the basics, but his background shines through winningly in novelties filled with chicken livers and coleslaw or grilled shrimp with fried green tomatoes. 3454 Magazine Street, 504-899-3374, mahonyspoboys.com

» For a true local scene, head to Domilise’s in the early afternoon: It’s as much theater as it is lunch. The family of matriarch Dot Domilise (who is mostly retired these days) slices the bread for the po’boys to order in a kitchen about the size of a backyard hot tub. A line often snakes between the tables of the cramped interior, once a barroom. Go for the hot sausage po’boy or request a house special—fried shrimp with gravy and Swiss cheese. 5240 Annunciation Street, 504-899-9126

CHEF OF THE MOMENT: DONALD LINK

In 2009 I posted on Twitter, “New Orleans is one big opium den for food lovers. And Donald Link is my favorite dealer.” At the time I was sitting in new Cochon Butcher, Link’s third restaurant and the spin-off of Cochon (French for pig). I was stuffing my face with Link’s muffuletta—layers of mortadella and other house-cured meats with provolone and a briny olive salad on a toasted sesame roll. Central Grocery in the French Quarter purportedly invented the sandwich, but, as with many things Link tackles, his version transcended the original. Cochon and Butcher, which both sit on an industrial-looking block in the Warehouse District, take their cues from the pork-centric markets in Cajun Country, where Link grew up. Butcher’s cramped room does contain a deli case, but the place quickly emerged as a lunchtime destination for gastronomes. Beyond other sandwiches (like the astounding bacon melt with collards and Swiss cheese), rotating sides typically include definitive boudin (hot Cajun sausage stuffed with pork and rice) and marinated vegetable dishes. A glass of flinty French rosé helps cut through the fatty goodness.

Link attended the California Culinary Academy and cooked in San Francisco before he returned to New Orleans, and the West Coast perspective serves him well: The food at his restaurants glorifies Louisiana but pulls back from the muddling richness that can pervade the local  cooking. Five years into its run, Cochon, with its smooth blond woods and scruffy exposed-brick walls, remains a hot ticket for visitors. I adore Cochon’s garlicky oyster roast, grilled pork ribs with watermelon pickle, and rabbit stew with dumplings.  But if it’s your first dinner at a Link establishment, I urge you to start at his firstborn, Herbsaint, on a prettier block of the Warehouse District.

It’s a place that wins you over quietly. The light-filled room with lime-green walls has a soothing simplicity. The bartenders pour a respectable Sazerac. Then comes the daily changing gumbo. Its ruddy broth, a pile of rice in the center, reveals smoke, meat, depth, care. Switch gears and share a variation on spaghetti carbonara with guanciale (bacony smoked pork jowl) and an oozing egg that was poached, then coated in panko and fried. You’re on vacation, so be bold and try the lamb neck—on the plate it’s fleshy and unintimidating—with chickpea puree, tomato confit, and lashings of goat yogurt. By the time you savor the last of brilliant pastry chef Rhonda Ruckman’s peach tarte Tatin flanked by pistachio-honey gelato, you’ll be tweeting unending devotion to Donald Link and his small empire, too. Cochon, 930 Tchoupitoulas Street, 504-588-2123, cochonrestaurant.com; Cochon Butcher, 930 Tchoupitoulas Street, 504-588-7675, cochonbutcher.com; Herbsaint, 701 Saint Charles Avenue, 504-524-4114, herbsaint.com 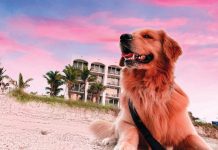 Five-Paw Stays: Pup-approved hotels that are off the chain