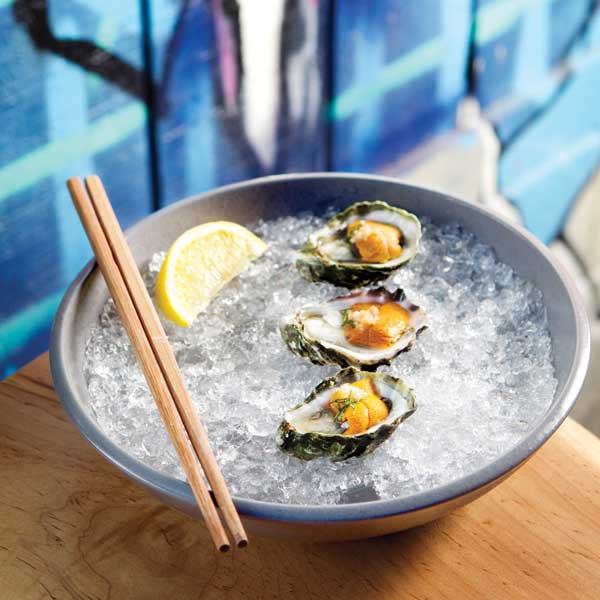 It took me way too long to finally eat at East Atlanta Village’s Octopus Bar, a fringe endeavor—call it a restaurant addendum—that came to life last fall. Nhan Le, owner of Vietnamese pho joint So Ba, and Angus Brown, a chef who previously worked at Miller Union, devised a win-win brainchild: Brown, assisted by Le, takes over So Ba’s stoves at 10:30 every night except Sunday and cooks until 2:30 in the morning. The late-shift kitchen crew and waitstaff swoop in, and So Ba’s menu full of noodle soups disappears, replaced by a brainy list of mostly small plates, rife with provocative, primo ingredients that mingle Asian and American flavors. Brown and Le aim to please restaurant pros who start knocking off work right as Octopus Bar mobilizes. A similar chefs-cooking-for-chefs intent fueled the opening of Holeman and Finch Public House in 2008, and it’s a recipe other aspiring chef-owners would do well to follow. Octopus Bar’s setup, however odd, yields some of the most focused and individualistic cooking in the city.

Customers congregate on the restaurant’s enclosed patio, a funky den, for the after-hours fireworks. Crimson-hued bulbs cast a low, moody glow that recalls Amsterdam’s Red Light District. Graffiti art covers the wood and concrete walls. Check out the mural behind the bar on an elevated platform in the back: An amorphous octopus, billowy and sanguine, looks equally inspired by fifteenth-century Japanese landscape paintings and the monsters in a Harry Potter novel. Be warned that, because this is technically a bar, smoking is allowed—though servers do seem to try to keep the Marlboro set in one section near the front, at least earlier in the evening.

I’m not patient about inhaling cigarette fumes, and frankly I’m not much of a late-night fellow, which is why it took me six months to check out this intriguing sideshow. But now I’ll be willing to lose some shuteye for Brown’s fettuccinelike homemade pasta tossed with lacy Jonah crab, delicate lobster cream, lemon, crushed pepper, and orange trout roe in all the right proportions. Its citrusy brightness, in particular, offsets the richness brilliantly. The nightly evolving list of sixteen or so dishes (small plates that range from $6 to $16, a few entrees meant for sharing priced between $23 and $35) skews heavily toward seafood compositions that settle lightly in the stomach. Oysters—small, briny Kumamotos and plump Shigokus with deep, cuplike shells—start the meal with slurps and happy sighs. Sea urchin devotees will love the nakedness of uni sashimi served unadorned in a carved-out lime. A tangle of shaved fennel and orange segments assuages the pleasant but robust oiliness of grilled mackerel. Nothing feels challenging about a classic Maine lobster roll, a simple pleasure of sweet, meaty hunks tumbled into a buttered and toasted bun.

The city’s chefs love their pig, and Korean cuisine is the current buzz, so the kitchen obliges with daeji bulgogi. Pork marinated in garlic, ginger, sesame oil, and other seasonings arrives on a fajita platter, alongside another plate piled with ingredients for do-it-yourself wraps: crisp spears of romaine hearts, homemade kimchi that leaves a lovely halo of heat on the palate, pickled daikon, and a bowl of fluffy white rice.

Chefs, as well as the East Atlanta bar crowd with whom this place is growing popular, also like to drink, and the beverage program needs to fill out some to match the food’s ambition. I crave a glass of proper Champagne with those oysters, for example, rather than the less nuanced Prosecco or lambrusco available. Overall, though, it’s hard to complain. I’ve never eaten so well in the wee hours of Atlanta. If Brown and Le’s collaboration keeps delivering this level of quality and boldness, I can’t imagine they’ll be cooking for so small an audience much longer. 560 Gresham Avenue, 404-627-9911