Home Uncategorized Waiting is the Hardest Part
One of my recurring fantasies involves opening a school for waitstaff. I show up for work wearing tall boots and fishnet stockings, and I have a whip in my right hand. “Achtung, darlings,” I say, getting ready to lay down the law once and for all. “First, don’t ever fiddle with your hair, and keep those fingernails short!”
The funny thing is, I am anything but a stickler for service. I don’t care if servers introduce themselves by name, call me “guy,” or drop a bowl of soup on my table. I am an angel when led to an awful corner with a view of the restrooms.

What I can’t stand is lack of sincerity or initiative. Bad servers stick to their scripts, no matter what, and never acknowledge the human transaction they engage in. Bad customers, on the other hand, think that they are the center of the universe and treat every staffer like a flunky. Yet obviously, if you pay a lot for service (18 to 20 percent of the check is standard), you should receive some satisfaction.

I asked Douglass Hawkins to be my expert on good service. He has been waiting tables for almost twenty years, and he brought his cocktail recipe for “Mr. Hawkins’s Manhattan” (Carpano Antica Formula vermouth is his secret) with him when he left Floataway Cafe for Watershed, where he is currently employed.

Born in south Alabama, Hawkins first learned the ropes at a chain restaurant. It wasn’t Houston’s, but we both talked about the phenomenal staff training the once-local company is famous for. Bit by bit, he fell in love with the culinary world and found that he had what it took to be a professional waiter. Modest in the best way, yet willing to let his true personality shine, he told me: “I know what people need before they know they need it.”

Hawkins uses humor as one of his weapons. When customers seem intimidated about ordering wine, for example, he looks at them dead serious and says, “If you don’t like it, I’ll drink it and we’ll get you something else.” He doesn’t burden customers with details of his life, but the fact that he is a well-rounded human being (he shows Morgan horses, he is a big college football fan, and he will be a graduate student in political science at Georgia State in the fall) helps him to be a good waiter.

“All waiters are greedy,” he teased. When people ask him for recommendations, he doesn’t rattle off the most expensive items, but he knows how to be “specifically vague” and work them in. His advice to other waiters: “Pour water, tea, and coffee as if your life depended on it.” Their livelihoods certainly do.

Goodwill, grace under pressure, and common sense are the best attributes in a server. Successful restaurateurs such as Anne Quatrano of Bacchanalia have an instinct for hiring personnel who reflect well on their operations. They develop an esprit de corps among their staff and teach by example.

For years, the apex of good service was the Dining Room at the Ritz-Carlton, Buckhead, where an impeccable and cohesive staff was the envy of the industry. Alas, the restaurant closed last October. Pano’s & Paul’s is gone, too, but Sam Than, its longtime dining room manager, is now at Bistro Niko and makes every customer feel like an old friend. Bone’s is still in the big leagues when it comes to service, and Fabrice Vergez of Downtown’s FAB has the same perfect pitch he had at Brasserie Le Coze. Neal McCarthy, who ran such a good dining room at Sotto Sotto, has transferred his expertise to Miller Union, where he has slowly assembled an intelligent, savvy staff. Some of the waiters at La Grotta have earned the right to be eccentric due to their long and delightful tenures.

I am not proud of the fact that, in a fit of rage, I once wrote the word “zero” where the tip should have been at the bottom of a check. I am only human: The server had debated me on whether my steak was properly cooked and charged me full price for a dish I didn’t eat. But ultimately, servers are like my extended family. They have the power to lift my mood or do just the opposite. I wouldn’t be who I am without them. 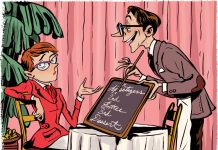 The Christiane Chronicles: Stop asking me, “Have you dined with us before?”