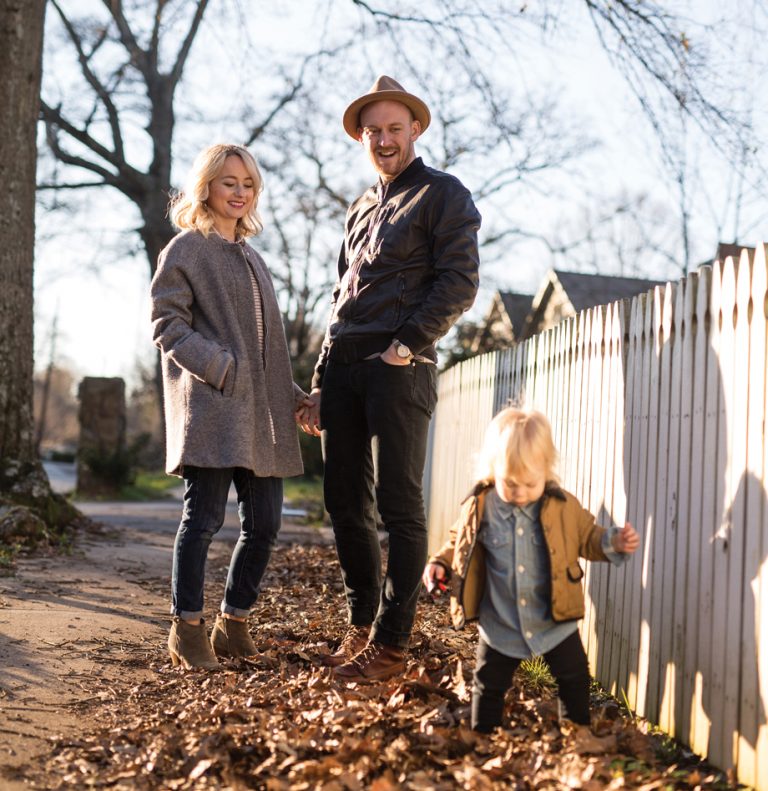 Raising a child has always been a daunting proposition, but in many ways, parenthood is even harder for the millennial generation, thanks to the Great Recession. In response, more millennials are delaying parenthood, with the average age of a first-time mother at a near-geriatric 26 years old. (It was 21 in 1970.)

For those thinking of having kids, we asked millennial parents for tips on surviving financially while maintaining a social life.

➔ Find your inner cheapskate. Expect to cut back on expenses like shopping, eating out, and traveling. You might even consider doing the unthinkable in Atlanta—ditching the car. Katie Hayes, the 32-year-old executive director of Community Farmers Markets and mother to a 14-month-old daughter, shares a car with her husband and bikes to work from her home in Cabbage­town.

➔ Share the load. Daycare is pricey. Anna Sanders, 29, a freelance graphic designer in East Atlanta, saves money by banding together with other moms to “babyshare.” The women trade off watching the kids, allowing each other to get in a full day of work without hiring a nanny.

➔ Bring your social life home with you. Finding time for friends can be a struggle once you have kids. To get more face time, invite everyone over to your place for a drink or host dinner while the kiddies sleep.

➔ Make plans to stay in touch. Anna’s husband, Phil Sanders, 28, who owns the coworking space Foster ATL and the new retail space Citizen Supply in Ponce City Market, isn’t the only one of his friends logging long hours to get a business off the ground. Sanders, who has an 18-month-old son, catches up with busy friends over breakfast every few weeks.

➔ Get some me time. Restore your sanity by having some kid-free fun with your friends. Marie Dietz-Meyer, 33, a stylist at DADA Salon, hits the town with her girlfriends or sisters while her husband stays home with their 18-month-old daughter. And she returns the favor when he plays soccer on Friday nights.

➔ Pick your battles. Millennials sometimes go into parenthood with specific ideas on how to raise kids, such as a ban on nonorganic foods or nap times set in stone. But realize that even the best-laid plans can go out the window. Sometimes you just need to get those kids fed and rested however you can.

➔ Should you stay or should you go? Most Atlanta millennials seem to want their kids to experience urban living, but admit the quality of local schools could determine if they stay ITP. It’s never too early to start researching public and charter school options. But just because a school district isn’t up to snuff today doesn’t mean it won’t improve before your child’s first day of kindergarten.

No Trump, but plenty of rhetorical red meat at RedState Gathering 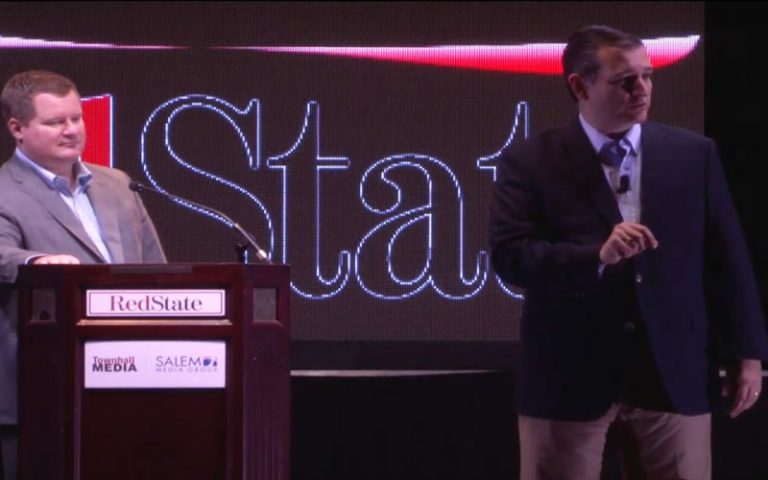 At first glance, the RedState Gathering held in the InterContinental Buckhead over the weekend seemed like your typical conservative get-together.

The booths lining the area just outside the ballroom, where 2016 Republican presidential candidates pitched themselves to potential supporters, were manned by organizations with “freedom” in their names—Faith and Freedom Coalition, FreedomWorks, Alliance Defending Freedom. Books written by the candidates were available for purchase, including former Arkansas Gov. Mike Huckabee’s latest, God, Guns, Grits, and Gravy. Giant presidential portraits were hung around the stage, the visages of George Washington, Abraham Lincoln, and, of course, Ronald Reagan, looking down at the candidates on stage. Panels over the course of the three days covered issues important to the politically right-leaning, ranging from shrinking government, defunding Planned Parenthood, and abandoning the Common Core.

But adding additional significance to this year’s RedState Gathering for Georgia conservatives is the so-called “SEC Primary.” Georgia Secretary of State Brian Kemp moved the state’s primary date up to March 1, 2016, and now voters in five southern states–Arkansas, Alabama, Tennessee, Texas, and Virginia–will all vote on the same day. Southern Republicans hope this will give them greater say in who will challenge the Democratic nominee before the field is winnowed down to a handful of candidates following decisive votes in Iowa and New Hampshire.

The GOP candidates now have a greater incentive to spend their time coming down South to sing the praises of peanuts and Waffle House in Georgia rather than corn and fried Oreos in Iowa. The Southern right also hopes the increased importance of the six-state voting bloc will encourage candidates to hew more closely to conservative principles and messaging.

“I think us versus Iowa, or really the entire Southeast versus Iowa, I think we better reflect the country,” said John Beisner, a businessman from Alpharetta. “I think our interests are better served in this way.”

The excitement about the upcoming election was palpable within the ballroom, which was filled mainly with Georgians. Returning to Atlanta for the first time since the inaugural event in 2009, this year’s edition of RedState took place one day after the first official GOP primary debate hosted by Fox News, the most-watched GOP debate in history.

One name was missing: Donald Trump. Originally scheduled to headline a tailgate post-party at the College Football Hall of Fame on Saturday night, Trump was disinvited after characterizing debate moderator and popular Fox News host Megyn Kelly as having “blood coming out of her wherever” a day after she took him to task for his previous statements about women. In a post explaining his decision to disinvite him, Erickson called Trump’s comments “inappropriate” and “wrong.”

The news was the topic du jour on Saturday.

“I think he had a lot of momentum, and he derailed himself completely there,” said Matthew Thomas, a 19-year-old from Kennesaw. “I think that was a terrible thing to say, and it really alienated a lot of people who were supporting him.”

Peri Similien of Mableton, thought it was “very disappointing for Erick to disinvite him,” especially since additional $100 event tickets were made available for the tailgate event Trump was set to headline. “People bought their tickets, last minute tickets, because they knew that Trump was going to be here,” he said.

In two recent polls of Georgia Republican voters taken before the first debate, Trump held a sizable lead with some of the more conservative candidates garnering single-digit levels of support. But it was clear support for these candidates, and Cruz in particular, was strong among the RedState faithful, where Cruz lapel stickers were ubiquitous. These are his people. He bragged of having attended every RedState Gathering, seven in all. He traveled to this year’s conference on his “Cruz Country Tour” bus, which he left parked across the street next to the Hyatt.

Betsy Shaw Kramer of Johns Creek, who said she did not support a specific candidate before attending the conference, said she “was totally blown away” by Cruz’s speech. Other popular choices were Fiorina, Rubio, and Walker. Bush, who Kramer described as “bland” and “not charismatic,” appeared to be one of the least popular choices.

Despite the increased importance Georgia Republicans will play in the primary, the candidates rarely mentioned the state by name, instead delivering stump speeches covering issues important to the party’s national conservative base. Popular topics were immigration, abortion rights, Common Core, Obamacare, the second amendment, and the Iran nuclear deal.

Hillary Clinton was a frequent target. “I’m not going to spend all my time talking about the other Republicans,” said Walker. “They aren’t my opponents. Hillary Clinton is.” And Ted Cruz drew a lot of laughs with this line about the Democrats: “They have a wild-eyed socialist with ideas that are endangering American’s place in the world . . . and Bernie Sanders.”

The attendees were interested in social issues, but several mentioned the importance of focusing on the economy. “I think if you can’t get the economics right, all these other arguments are frankly not going to matter,” Beisner said. “I’ve got two kids, I want them to have good opportunities and to have a better life than what I’ve had.”

Another big issue was the lack of diversity among conservative voters.

Similien, one of the few African Americans in attendance, decried the difference in demographics he noticed between the RedState Gathering and the host city of Atlanta. “For this to be a predominantly black city,” he said, “you should have proper representation here as well in numbers, and not just the handful of us who are here because a lot of us have values that tailor to what Republicans stand for, with what conservatism stands for.”