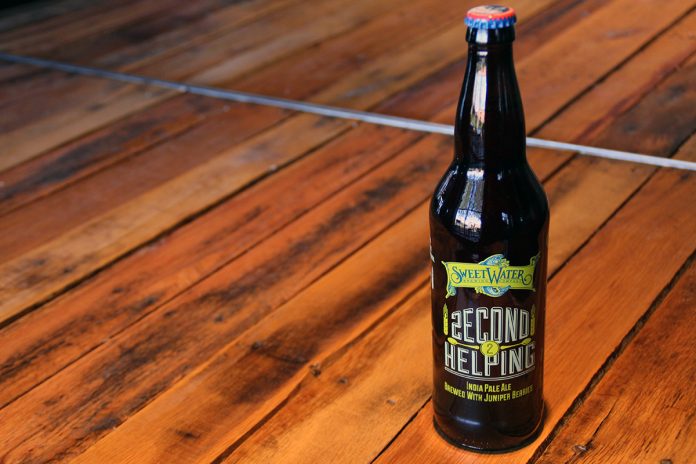 SweetWater Brewery is set to launch a limited release of The Giving Kitchen’s Second Helping IPA next week, a collaboration that will benefit the nonprofit created to support Metro Atlanta food industry employees during unforeseen hardship. The Giving Kitchen (TGK) was inspired by the community support chef Ryan Hidinger of Staplehouse received, following a stage four gallbladder cancer diagnosis this time last year. Hidinger and his wife Jen were on the cusp of moving their much loved supper club into a brick-and-mortar location when news of the cancer struck. [Editors note: Ryan Hidinger passed away on the day we published this blog post. He leaves behind a community unified by his battle, as evidenced by the generosity he inspired.]

It wasn’t long before Team Hidi was born, a fundraising initiative that according to TGK raised close to $300,000 for Hidinger’s treatment. Led by Hidinger’s former employers at Local Three and Muss & Turner’s, Team Hidi took on multiple iterations—special event dinners, the Round Up for Ryan donation line added onto restaurant bills all over the city, and the inaugural main event that brought chefs, farmers, bartenders, live bands, and a host of Atlantans together to celebrate Hidinger’s life and fight for his future. The generous outpouring from friends and strangers took the Hidingers by surprise, where they soon saw an opportunity to extend the help they received to others in need.

Second Helping’s debut, though, has coincided with devastating news. Hidinger and his wife Jen posted an update on their blog Tuesday morning that the war against Ryan’s cancer was “coming to an end.” The post went on to say that “Ryan’s liver is failing,” that no one knows how long “his body will hang on,” but that Ryan hopes everyone will continue to truly live life and celebrate loved ones.

Second Helping IPA will be available in stores and on draft at restaurants and bars throughout Metro Atlanta, and 22-ounce bombers hit shelves Tuesday, January 14. Both SweetWater and their distributor United will donate all Second Helping proceeds to TGK. And later this month, the legacy that Hidinger started will continue with Team Hidi 2.0.

Via email, I corresponded with Steve Farace, director of marketing at SweetWater, and head brewer Nick Nock to talk about the development of Second Helping, which won first place in a blind taste test at SweetWater’s Brew Your Cask Off 2013. Farace and founder Freddy Bensch were inspired to contribute to Team Hidi after hearing the Hidingers speak at a brewery-hosted benefit for Charlotte Nelson, the head chef at Fox Bros. Bar-B-Q who died following a breast cancer diagnosis last February.

How did the idea for a collaboration beer come about?

Steve Farace: After the Charlotte’s Web event, we began the conversation with Ryan and Jen Hidinger, and Ryan Turner (on the TGK board), to discuss the most beneficial way that we could help this cause. We wanted to create something special that would get TGK’s message in people’s hands via draft taps at restaurants and bars, package stores, and so on. Plus, we knew Ryan was knowledgeable about good beer (he actually worked at the brewery about ten years ago for a very brief period) and would help us take this concept to a tasty reality.

Farace: It was Ryan’s call. The IPA was a personal favorite style of his. Being that this is a beer made by a chef and brewer team, the ultimate goal was to have it pair well with food. IPAs lend themselves well to a variety of flavors—salty, savory, spicy, and grilled.

Nick Nock: Second Helping is brewed with 2-row, Victory, Wheat, C30, and chocolate malts. It features five varieties of hops including Bravo, Centennial, Chinook, Simcoe, and Amarillo. Juniper berries—a common culinary ingredient—were added in the whirlpool and again in the dry hop phase to pull piney, dry berry characteristics on the palate. The Victory and chocolate malts add a touch of nuttiness, as well as a nice amber hue to complement the berry’s colors. It serves up at 7.5% ABV and 69 IBUs.

What inspired the addition of juniper berries?

Nock: I believe the juniper berries were an addition of Ryan’s as he enjoys cooking with them.

The name ‘Second Helping’ touches on a lot of levels.

Farace: It came about organically in our original conversations. This beer, for some, is a second chance. We played into the food connotation of “second helpings,” and the fact that TGK is a helping hand for the [Atlanta] hospitality community.