Home Uncategorized Billions have gone into perfecting the climate-friendly burger. What if the answer...

In September 2019, the 10 candidates then running for the Democratic nomination for president appeared in a televised town hall devoted to the climate crisis. The stakes couldn’t have been higher: A year prior, the UN’s Intergovernmental Panel on Climate Change had warned that the world had only 12 years to keep global warming beneath 1.5 degrees Celsius—a crucial metric for forestalling the worst of the flooding, drought, storms, and wildfires we’ve already begun to experience. Yet, amid the various substantive matters of discussion, multiple candidates took pains to emphasize a specific point:

Your hamburger is safe. Nobody is trying to take your burger.

This didn’t come from nowhere. Previously, when Democratic lawmakers introduced details of a proposed Green New Deal, opponents latched onto the burger, sometimes literally, as a means of attack: At a press conference, a House Republican took a bite of one while warning, “This will be outlawed.” That was bunk, of course. But it highlighted the burger’s weird centrality to U.S. climate discourse. Legislators aren’t the only concerned parties: Endeavors to create plant-based burgers that are as meatlike as possible, even to the point of “bleeding,” have attracted billions of dollars. Impossible Whoppers are now available at Burger King, and the investment frontier has expanded toward lab-grown meat.

These efforts recognize a legitimate need. Livestock accounts for about 14.5 percent of global greenhouse gas emissions; most of that is from cattle, which also require tremendous amounts of land and water. But they also recognize a symbolic need—in the U.S., the burger is symbolic above all. Its fate stands in for bigger concerns about climate change adaptation: Will things change cosmetically—an electric truck that’s as powerful as one with a combustion engine, a burger that bleeds like the real thing—or more fundamentally?

It may be a little late for this question, as scientists and others have noted with increasing desperation. This spring, following yet another IPCC dispatch decrying the continued lack of action by governments around the world, UN Secretary-General António Guterres said the world is “perilously close to tipping points that could lead to cascading and irreversible climate effects.” But it also might not be the best question to ask. “Climate policy has long been framed as an issue of stiff-lipped sacrifice: What will we have to give up to save our skins?” the climate journalist Kate Aronoff writes in her recent book, Overheated. The burger tends to get trapped within this matrix: We’ll either have to give it up or be saved, via technology, from that fate—by another burger, just one made from plants. This approach is kind of a bummer, though. As Aronoff proposes: “Why not start with the freer, happier, and more functional world we can win?”

Also, why not start with something better than the meager burger? Aside from the contemporary environmental consequences, reasons abound to look askance at it—a rather recent dietary staple, and one with a complicated history. Beef, encoded in the DNA of the U.S., isn’t indigenous to the Americas: Cows were brought here by European colonists. Even in Europe, meat wasn’t central to most people’s diets prior to the 19th century, as the writer Ligaya Mishan noted in an essay earlier this year: It tended to be special-occasion fare, or a marker of identity embraced by middle-class strivers seeking to distinguish themselves from the poor, to claim their “mastery of the world.”

Mishan continues: “No wonder, then, that the citizens of a newborn nation, one that imagined itself fashioned on freedom and the rejection of Old World hierarchies, should embrace it.” (As James Oglethorpe, founder of the colony of Georgia, put it: “This Countrey cannot be supported without Cattel.”) Today, Americans eat more meat than almost anyone in the world, while in growing countries, its consumption continues to denote progress. The politicians may be part right: Meat is symbolic of Americanness. But it may also be symbolic of a certain kind of Americanness that doesn’t account for how this country—much less the world—looks today, centuries later. It doesn’t account for the vastly more diverse place this is, with a manifestly better system of collective values and the abundant intellectual and creative—and culinary—resources of all of the people who now live here.

As for the veggie burger—a descendant once removed from this strange lineage? Philosophically, this all complicates the patty. But I would submit to you that plant-based burgers suffer a more immediate problem: They’re often not very good. There’s something joyless and begrudging about the low-carbon copy, especially when you consider that the alternative is—well, just about every other food on Earth, most types of which come from the soil, and many types of which are affirmatively delicious on their own terms. I say this as somebody with plenty of appreciation for a good—real—hamburger: In situations where an alternative patty is desired, the greasy puck of mystery protein has absolutely nothing on the falafel. The puck was created to be compensatory; the falafel evolved to be tasty.

One does not have to swear a devotion to vegetarianism to appreciate this. (One does not even have to forswear the meatless patty: There are some killer versions highlighted below.) It simply offers the opportunity of thinking beyond the burger and toward the many ways of eating that exist outside it, and toward the possibility of framing the response to climate change as an opportunity. The focus on the veggie burger as the acme of meat-free eating obscures, too, an even simpler point: Vegetables—in their many forms—are wonderful. They don’t need to pretend to be anything else.

In our June 2022 issue, we covered a lot that’s new: gorgeous Persian plates at the new Rumi’s in Midtown; a new farm in Gainesville specializing in South Asian vegetables; a cooperative of pecan-milk makers forging a new kind of democratic business model; new opportunities to spend $19 on a bowl of soba noodles at the Four Seasons hotel. But on the other hand—and not to undersell it—nothing there is particularly novel. Nothing is cutting-edge, and certainly nothing bleeds. Many solutions to the climate crisis already exist, and are within reach; many can even be joyful, expansive, and luxurious.

Here are some of the city’s best:

Impossible Boti Burger
The one faux-meat burg’ on this list—by the one and only Meherwan Irani, who serves it at his Ponce City Market street food joint Botiwalla. It’s actually two small patties, seasoned with ginger, cumin, mint, and cilantro and served on a pair of Indian pav buns with green chutney, Maggi ketchup, and slaw. Old Fourth Ward, botiwalla.com

Jane’s Homemade Veggie Burger
Made with veggies, grains, and tofu, this substantial, old-school veggie patty comes on naan rather than burger buns at one of the chillest bars in town, the Righteous Room. Poncey-Highland, stayrighteous.com

Crunchy Boi
I guess the vegetarian choice at How Crispy Express is technically a fake chicken sandwich, but boundaries get fuzzy when you’re working on the level of simulacra. Anyways, this fried chickpea patty is crunchy indeed, with an herby punch, a creamy spread, and an unusual depth of flavor. Summerhill, howcrispy.com

Back to The Joy of Vegetables 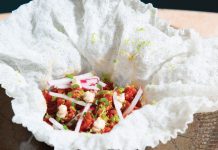 The verdict on 4 new Atlanta restaurants: Atrium, Atlantucky Brewing, How Crispy Express, and the Daily