Cofounders Jackson Smith and Wes Jones point out a sketch taped onto the floor of Honeysuckle Gelato’s Westside production facility. Made of blue painters tape, the improvised rendering is about 180 square feet—the size of the gelato-sorbet startup’s retail shop at Ponce City Market that’s slated to open this spring. “We’re basically going to have a kiosk,” Smith says. “Considering the food truck was only 50 square feet, you could say we’ve actually quadrupled our size.”

When the light-blue food truck first hit the road in 2011, Atlantans wholeheartedly embraced its Southern-inspired offerings. Early on, fans took to social media to track down flavors such as sea-salted caramel, espresso, and watermelon sorbet. Though the truck retired in summer 2013, you can find pints at retailers like Whole Foods Market and Lucy’s Market in Buckhead. Even local chefs have turned to Honeysuckle to develop unique flavors for their ever-changing dessert menus (black sesame, anyone?).

You could say that Smith, Jones, and their third cofounder, Khatera Ballard, have been successful in bringing well-crafted, Italian-style ice cream to the Southeast. But the group recalls that early on they had a bit of educating to do. Many customers hadn’t tried gelato before or were accustomed to what Smith calls “tourist gelato”—super puffed up with air and stylized with unnatural coloring. Some were confused about what gelato was, exactly (shaved ice, perhaps? Is there gelatin in it?).

Italian gelato is similar to American ice cream, but where our frozen pastime contains large amounts of butterfat and air, gelato dials those down, resulting in a rich, creamy product that’s hard not to describe as heavenly. The trick is in the mixing: too much fat and you’ve got something bordering on cheese, but too much sugar and the frozen product won’t be dense enough. Smith and Jones didn’t expect customers to know all that, but they figured people would respond to foods that felt familiar, like bourbon and pecans or figs with honey, two pairings that have become the backbone of the brand’s flavors.

Former classmates at North Atlanta High School, the duo first realized a Southern take on gelato might have legs in their hometown during Smith’s stint in New York from 2009 to 2010. While his wife (then his girlfriend) was in law school, Smith answered a Craigslist ad calling for a part-time ice cream maker in Manhattan. The job was at Il Laboratorio del Gelato under the masterful eye of Jon Snyder (founder of the Ciao Bella Gelato Company empire). Smith says he learned from Il Laboratorio’s setup: They did a large wholesale restaurant business (upwards of 500 clients on the island alone), along with a small retail window.

He learned fast, and after three years and almost 300 flavors distributed to seven states, a true brick-and-mortar location is finally in the works. It came down to finding the right space, the founders say. They believe they found it in Ponce City Market, where they will launch new offerings such as gelato sandwiches and milkshakes. Customers will also be able to create their own flavors by starting with a base, like brown butter or chocolate, then layering in additional toppings. “We’re happy about engaging directly with customers again,” Jones says, an element of instant feedback they’ve missed since retiring the food truck to stay on top of growing business. “We want to see what people end up doing that we haven’t tried before.” Bourbon Pecan
bourbon base with caramel and pecan bits Peppermint Bark
peppermint base with peppermint dust and chocolate chips Snacks on a Plane
Biscoff base with peanuts, pretzels, and caramel

This article originally appeared in our March 2015 issue appeared under the headline “Keep on Churning.” 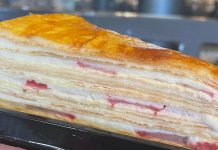