Home Uncategorized O-Ku to open in early November on the Westside, Umi chef to...

Chang will use truffle oil and white truffle butter, as well as squid ink sushi rice, in various dishes, especially in the omakase menu. “I want to show our customers what I love,” says the chef, who hails from South Korea.

Brienza adds, “The Atlanta palate is a little more progressive. We’re trying to get the guest to step out of their comfort zone and try something a little different.”

The cocktail menu will be designed in part by general manager Kelsey Schulz, who brings experience from Charleston’s Cocktail Club. There will be a premium sake and wine list, in addition to a “very progressive” cocktail menu, Brienza says. The beverages may include Japanese teas, drinking vinegars, and shrubs. Cocktails include a sugar and spice martini with habanero-infused vodka, passion fruit puree, and simple syrup served up; and an angel mojito with Thai chile pepper rum, coconut cream, and fresh mint.

And for any late night revelers, O-Ku will serve a limited food menu and late-night sushi happy hour on its rooftop bar. “We want to keep the action in the area,” Brienza says. 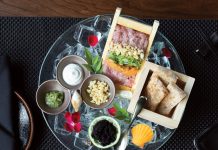 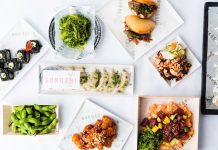