When Parnass Savang and Rod Lassiter debuted Talat Market last spring, they had no idea how the city would respond. The pop-up dining concept, serving “Georgian Thai” food at Candler Park’s Gato, took the place of Jarrett Stieber’s immensely popular Eat Me Speak Me—a tough act to follow. But Savang, a child of immigrants (his father is from Laos, his mother is Thai), didn’t come to play it safe. His first pop-up menu featured fried chicken feet and fermented pork sausage.

“There are dishes I’m interested in but haven’t seen in other Thai restaurants,” he told me at the time, speaking in part about his own father’s restaurant, Danthai, which has been serving Americanized Thai food to the people of Lawrenceville for over two decades. Savang, now 28, grew up helping out in the restaurant’s kitchen. Eventually, he made his way to the Culinary Institute of America, and followed that up with stints in some of Atlanta’s most acclaimed restaurants: Empire State South, Kimball House, Staplehouse. But his plan was always to return to Thai food—and more specifically, to introduce Atlanta to the flavors and techniques his parents used at home but never brought into their restaurant, assuming the city’s palate was just not ready.

With the near-instant success of Talat Market, Savang proved that we are, in fact, ready. Every weekend night, you’ll find throngs of people waiting outside Gato’s tiny dining room, their names and party numbers written on a clipboard hanging over the door. “First it was white hipsters, and now it’s a bunch of Southeast Asian people shocked by how good the food is,” laughs Savang. “If you can convert those people, you’re doing something right.”

Inside, Savang and sous chef Lassiter sweat it out in the tiny open kitchen, serving up an ever-changing menu of locally sourced dishes made with Thai flavors and techniques. Some are classics, like hoi thawt—a crispy mussel pancake traditionally served as a coastal streetside snack—and some are completely off the wall, like the bua loi dessert with glutinous rice dumplings, jujubes, and watermelon Pop Rocks.

“This is not me doing fusion; this is me extending an idea that’s already there,” says Savang. “That’s how cuisines have evolved. Georgian Thai is so far removed from Thailand, but it’s another evolution of Thai food.”

Critics agree. Over the past year, the young chef has been showered with accolades, both from local publications, national industry magazines like StarChefs, and even the James Beard Foundation—last month, Savang was named a semifinalist in the Rising Star Chef of the Year category.

Now, Savang and Lassiter are ready for the next evolution of Talat Market. The duo has just signed the lease on their first brick-and-mortar restaurant, located on a quiet, mostly residential corner of Summerhill’s Ormond Street, inside an abandoned Asian market space. The restaurant, slated to open early next year, will include a covered outdoor patio and an attached market selling local produce and hard-to-find Thai imports like MegaChef fish sauce and Shark Brand Sriracha. A large, lit-up version of their signature yellow pineapple logo will act as signage.

“People go to Buford Highway for this stuff,” says Savang. “I don’t get why no one has done anything here yet.”

The dinner menu will follow Talat Market’s winning formula: no more than ten items at a time, driven by the seasons. There will be a couple of staples, Savang says, but everything else will change constantly, just like it did at the pop-up. A fixed lunch menu with just a few items—duck, pork belly, rice, some mustard greens, soup—will be available from noon until supplies run out. “I want it to be the neighborhood go-to,” he says. “You come here, grab a quick bite, and go on your merry way.”

At night, however, the atmosphere will be totally different. Savang hopes to recreate a classic Thai streetside vibe: Thai beer and wine, late night food options that pair well with said beer and wine, maybe some beer slushies, maybe some fried crickets. “I can do whatever I want, like, literally!” he says, eyes flashing with excitement.

In June, Savang and Lassiter will travel to Thailand together for the first time. They hope to survey the dining scenes in Bangkok and Chiang Mai, learn about Thai jungle cuisine, and find out how to make the perfect kanom jeen (thin rice noodles). When they return, they’ll finish out the summer at Gato. The pop-up will close on the last day of August, clearing the way to focus on the brick-and-mortar. As of March 15, Savang had raised more than a quarter of his $10,000 goal on GoFundMe.

“When I first started Talat Market, I made all these bold statements,” says Savang, who has been talking about opening a restaurant almost since day one. “It was kind of crazy, to say all those things to the entire city. But now, they’re happening. They’re actually happening.” 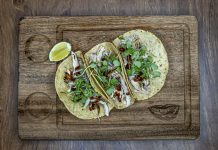