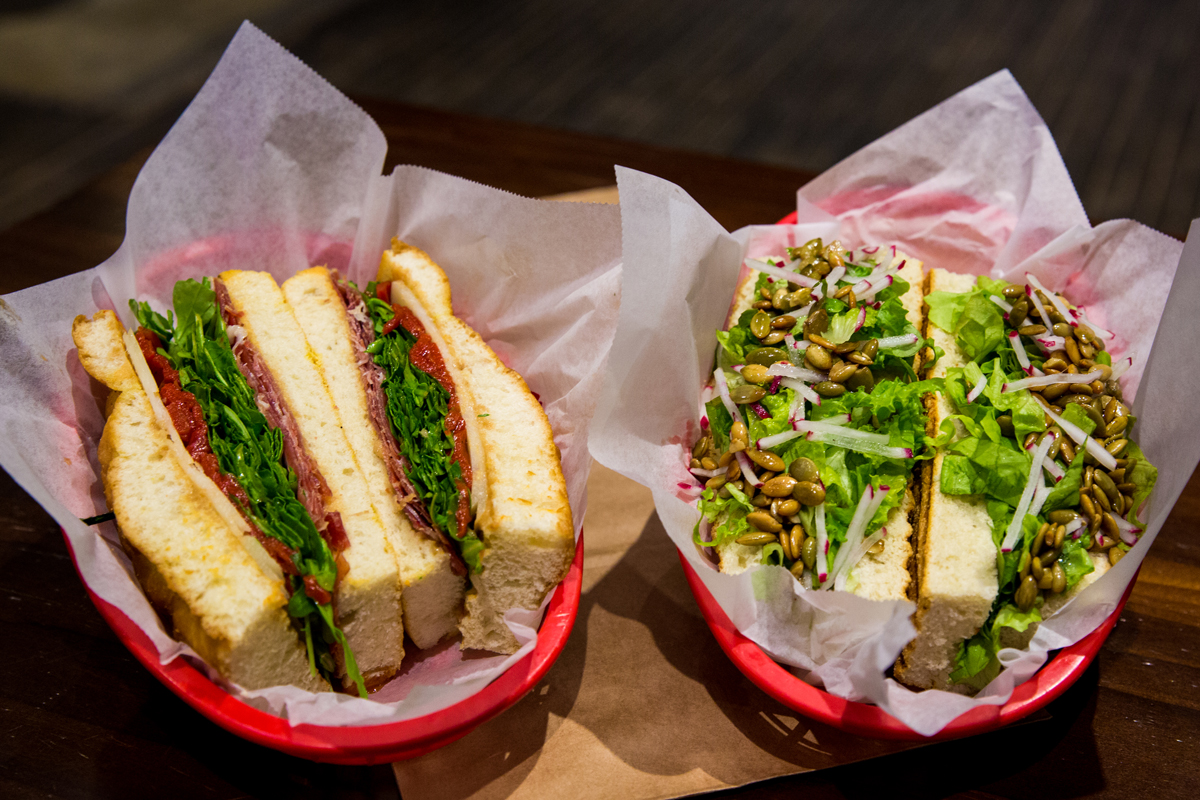 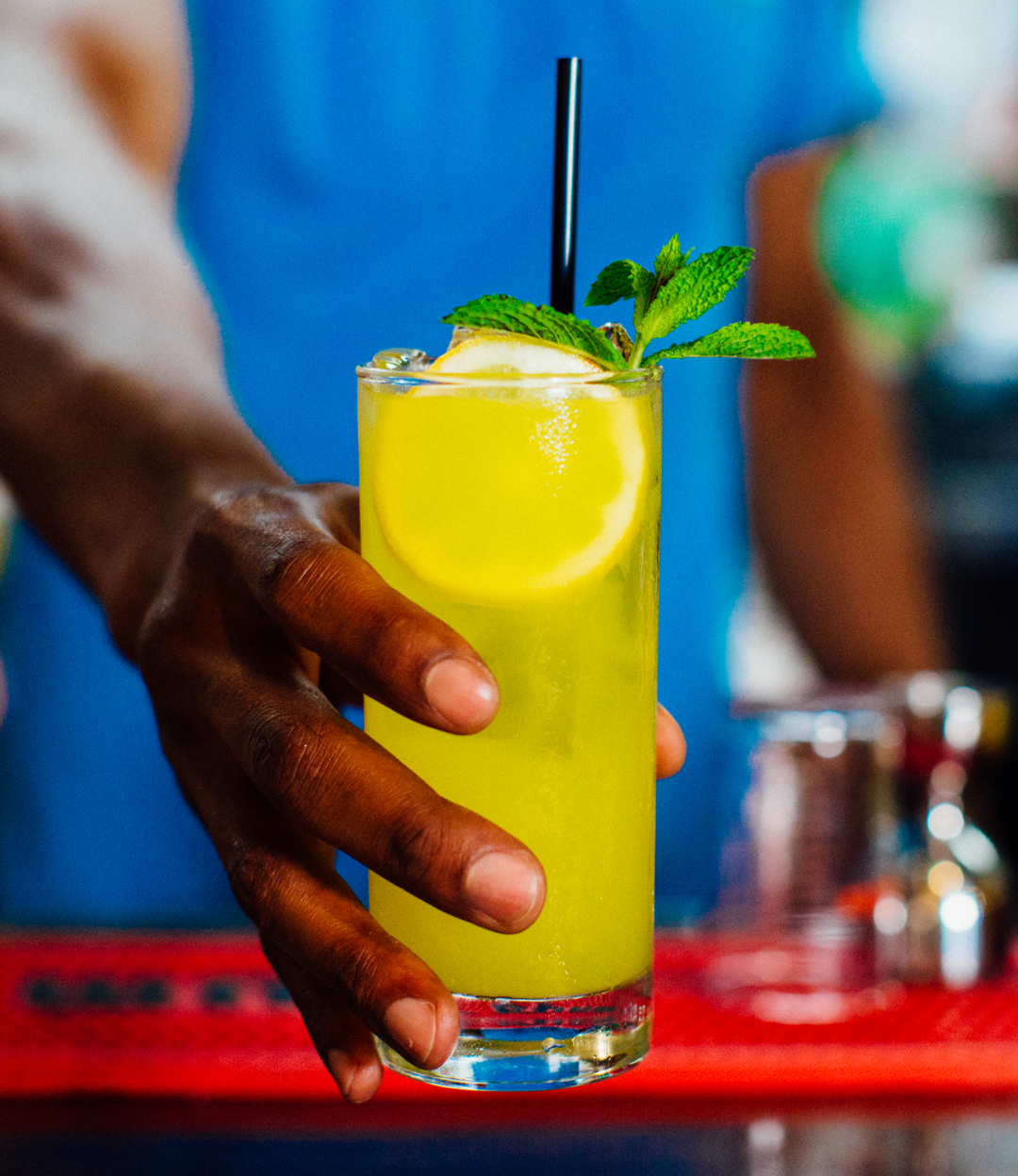 El Super Pan at the Battery
Chef Hector Santiago once operated one of the most exquisite and expressive restaurants in Atlanta. The city lost a piece of its culinary soul when he shuttered Pura Vida, a high-end Latin tapas joint, in 2012. That was the same year he also closed his younger sandwich spot, Super Pan, which now has been twice resurrected—first in 2015 as a Ponce City Market stall, then in July at another playground of sorts: the Battery at SunTrust Park. The menus at the Battery and PCM locations are similar. You’ll find seven sandwiches, including both a classic and vegetarian Cubano and a dreamy tuna escabeche on focaccia, a must-order Latina green goddess salad, a bunch of sides (get the maduros), and daily specials. Both locations also are flanked by a near-overload of similarly ambitious dining options. But there’s something extra special about sitting on the El Super Pan patio at the Battery during baseball season, feeding off the ballpark’s energy while sipping on a Margarita de Santiago (tequila blanco and reposado, orange shrub, citrus juice, salt) and feasting on a warmly pressed media noche that’s stacked with porky goodness and cut with crisp pickles and sharp mustard. No stadium dog can possibly compete. 455 Legends Place, 404-521-6500

Firepit Pizza Tavern
Chef Leslie Cohen, who triumphed on the Food Network’s Cutthroat Kitchen, now enters a fiercer rivalry: the pizza game. Her new spot in the Larkin development on Memorial will have to compete against longtime neighborhood joint Grant Central Pizza, against newcomer Your Pie just up the street, against no-frills Edgewood Pizzeria, against Varuni Napoli in Krog Street Market, against Ammazza on Edgewood (if it ever reopens), and against Nina + Rafi, the soon-to-come and extremely hyped joint from the owners of O4W Pizza. And that’s just within a one-mile radius. How might Cohen’s Detroit-style pie stack up against its Neapolitan, New York, and New Jersey–style peers? That depends on your taste, but probably somewhere near the middle. Unlike most Motor City pizza, Cohen’s is round (but is still cut into squares), and, unlike Neapolitan pies, hers is a little thicker and sturdier. She uses a blend of mozzarella, cheddar, and provolone, which is sacrilegious in some circles but works in this context. The menu offers five white and five red pizzas, including the Honey pie, which is topped with spicy capicola, caramelized onions, Calabria peppers, fresh basil, and honey ricotta, and is a variation of sorts on the Bee Sting pie popularized at Roberta’s in Brooklyn. This one might have a touch too much honey, but it’s still a fun time—and a worthy contender in Atlanta’s pizza wars. 519 Memorial Drive, 404-495-4777

Patria Cocina
You know that twinge of disappointment you feel when your favorite scruffy band releases its second album? The follow-up is more polished than the first effort, but it’s also sanitized to the brink of blandness. That’s what many devotees of El Mexicano must feel after the owners of the homey, ramshackle joint on Moreland Avenue closed shop and launched Patria Cocina in the Beacon, a pristine, BeltLine-adjacent development in south Grant Park. With its sleek, vaulted space, its more streamlined menu, and dishes that are often lighter and prettier, the new restaurant is an improvement in some ways but not nearly as endearing. Among the small-plates section of the menu, you’ll find a shrimp and fish ceviche similar to El Mexicano’s, as well as new additions such as the potato-filled, lightly fried tacos de papa, which are crisp and noshable if a little low on flavor. The trio of tacos—shrimp, fried fish, and fried avocado—are cute in their little metal taco holders but pale in comparison to the Mexican Street Tacos that, fortunately, migrated here from El Mexicano. As it turns out, if you stick to the menu offerings that are most like the El Mexicano originals, Patria Cocina—much like that second album—can grow on you. And though it’s not as special as its predecessor, you might become more willing to embrace it out of a yearning for the comfort of El Mexicano and a shimmer of what used to be. 1039 Grant Street, 404-622-3501

This story appears in our November 2018 issue.