I think the time has come for a fashion intervention for the lovely host and judge of “Top Chef: Texas,” Padma Lakshmi. Let’s all pull up a chair in a comforting circle and tell her how her belted gray jumpsuit from last week made us sad, and how this week she made things worse in what looked like one of Emeril Lagasse’s fat-day flannels, cut off at the sleeves and belted at the waist and with no pants. And Padma, I’m concerned—where is your butt? You turned around in a tiny romper and your posterior seemed to have skipped town. No, please don’t make excuses in that affectless, Hannibal Lecter voice of yours. I’m trying to help you.

While we’re at it, we might want to talk about treating Grayson Schmitz (of Olivier Chen Catering and Events) for what is clearly Tourette’s. Or, at the very least, a serious case of Potty Mouth.

“That’s f—ing delicious.”
“Jesus Christ, what the f—. Two hundred people. A–holes.”
“You are the s—.”
“I feel like I got brutalized because of f—ing chicken salad. They wanted me to do more. Duly noted. F—.”

She’s one of the six cheftestants left to compete this week. To start, the cooks are paired for the Quickfire Challenge, in which they’re required to peel, devein, and butterfly two pounds of shrimp; shuck a crate of corn; and make a pound of fettuccine. Then use any of the remaining forty minutes to make a decent dish from these ingredients. Winners split $10,000. The guest judge is Cat Cora, from “Iron Chef America” and the upcoming “Around the World in 80 Plates.”

“I’m about to puke,” says Paul Qui of Uchiko in Austin, who worries he’s a bad luck charm when paired with Edward Lee of Magnolia in Louisville, Kentucky.

Lindsay Autry of Omphoy Ocean Resort in Palm Beach works with Sarah Grueneberg of Chicago’s Spiagga, and they get their mise en place done the fastest, leaving sixteen minutes to cook. Ed and Paul end up with ten minutes, and Grayson and Chris have even less.

Ed and Paul are disqualified because Paul forgot to sauté the shrimp and put it on the plate (you are like the bad-luck tiki idol on “The Brady Bunch” Hawaii episode!), and Chris and Grayson win the $10,000.

Now, the teams find out they’ll be head-to-head competitors for the Elimination Challenge. They are tasked with coming up with one dish that each will cook their own way and serve to a block party of 200 people at a San Antonio brewery. Winner will get $15,000. Chris and Grayson pick chicken salad sandwiches, Lindsay and Sarah pick meatballs, and Ed and Paul pick Asian beef barbecue. Then comes the kicker: The dishes must be low-fat and healthy, given that Healthy Choice is sponsoring the show and this block party.

“I have no idea what a block party is,” Ed says. I have no words.

The chefs shop at Broadway Central Market, where Grayson sends a Shia LeBeouf look-a-like scurrying for chicken, and then get two and a half hours to cook at the Culinary Institute of America. Then the cooks relocate outdoors for the block party. It is, apparently, more than 100 degrees outside. And worse, there’s a plague descending on our competitors. A force so scary, it’ll nearly reduce a grown man to tears. (Cue ominous music.)

Chris does not like them and tells them to get the f— off his watermelon salad. His fear of being stung even impedes his ability to serve food to the block party guests. “I’m trying to get help with the 95 bees that are back here,” he says. “I really swell up when I get bit by these f—ing things.”

He manages to survive the swarm, and the guests make the rounds and vote for their favorites. Then the judges arrive, including Dana Cowin, editor in chief of Food & Wine magazine. They try Ed’s open-face kalbi—Korean short-rib barbecue—with kimchi chipotle puree, pickled cucumber, and onion. For this dish, Ed did homemade bread, and only made a limited amount, so he scolds a kid who takes too much. Nice touch.

“It’s hot in Texas,” he says enthusiastically, to explain the side dish, and Tom Colicchio gives a smarmy smirk, like he’s too cool for Chris’s good attitude. Tom, that ridiculous soul patch and the fact that you couldn’t keep Craft afloat in Atlanta tells me your cool factor is seriously on the slide. And Emeril is confused by the choice of chicken salad for a block party? What? Have none of you ever gone to a block party? Chicken salad—and bees—are mainstays! As are awkward encounters, peppered with banal small talk. So we’re on the right track here.

Sarah serves up a Calabrese-style meatball and vegetable salad. Lindsay’s is a Mediterranean meatball with lemon yogurt, black-eyed peas, quinoa, and Greek salad.

The chefs return to the kitchen to await their fates, and Grayson, Paul, and Lindsay are called in first. They’ve each beaten their partners on this challenge, though they’re not going to get overloaded with praise. Tom puts on that obnoxiously bemused expression and asks Grayson if she really thought she could win with chicken salad, going up against more sophisticated dish ideas.

“Like a MEATBALL?” she says, incredulously. Already there’s talk of putting that phrase on T-shirts.

Paul is the winner. Then the losers get called to the Judges’ Table. Chris is skewered for always having ideas but never executing them properly, and he’s sent home.

“The mistakes I made were stupid,” he says. “I’m gonna miss being here.”

Chris gets another shot in the “Last Chance Kitchen,” which pits him against previously eliminated Beverly Kim of Aria in Chicago. In a voice-over, Padma calls him “the loveable nerd.”

Next week: Let’s invite a sex offender to dinner! That’s right, it’s Pee Wee Herman. What the what? 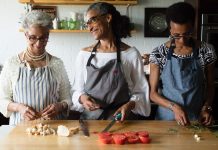 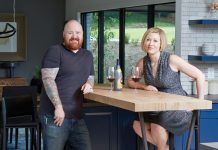 For Gunshow chef Kevin Gillespie, his Buckhead home is a treasured respite 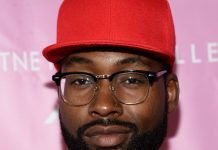 Remembering Mychael Knight: “Atlanta is the city that has always nurtured me”