If you’ve read any of those yearly dining trend prediction pieces, you’ve probably heard Filipino food is supposed to be hot this year. Up until now, Atlanta has had few Filipino options, save Kuya’s Food Express inside the ASSI Food Court and grocery stores where you can sometimes order lechon (a whole roasted pig). But this underrepresented cuisine has finally surfaced at Upper Room, a pop-up run by chef Andrew Bantug and Joyce Lau on Sundays at Tomo that routinely sells out in minutes.

Bantug’s parents immigrated from Manila to the New York separately as teenagers. They moved to Atlanta when the chef was three years old. After graduating from the Culinary Institute in Hyde Park in 2008, Bantug returned to Atlanta and began working at Bluepointe and other restaurants before landing at Tomo. After helping chef Tomohiro Naito make the transition to his new space in the Ritz-Carlton Residences in 2011, Bantug left, citing “a [desire] to move around a little bit more to keep learning, keep on experiencing new cuisines.” During that time, he did stages (unpaid externships) at Eleven Madison Park and Le Bernardin before returning to Atlanta.

It was Naito who actually reached out to Bantug to return, and this time, Bantug had some ideas of his own. Naito agreed Bantug could hold his Upper Room pop-ups at Tomo, and Bantug launched the series with his girlfriend, Joyce Lau, a year ago. At first the pop-ups were family-style ramen lunches and bento brunches, but Filipino cuisine was what the chef knew best—and something he’d always wanted to do. In November, he debuted his Filipino cuisine, served kamayan—a family-style dinner of traditional dishes eaten with your hands.

“These are the [dishes] my mom made for us growing up, so it just made sense for me to make those things,” said Bantug. “It’s also easier because I have a very supportive mom, and she’s always willing to help me tweak my food. You can make [your mom’s recipes], but somehow no matter what you do, it’s just not as good.” He undersells himself.

Bantug comes to every banana leaf-clad table with a rolling stainless steel cart filled with all sorts of dishes and sauces made by him and cooks Esther Kim and Mark Chen. Patience at these meals is a virtue, because the chef will carefully lay out all of the ingredients on the banana leaves at each table while your stomach grumbles in anticipation. The wait is worth it. Bantug’s grab bag of Filipino specialties such as pancit (a thin noodle dish), adobo pork ribs (baby back ribs cooked in vinegar, soy, and lemongrass), steamed rice drizzled with leftover sauce from said pork ribs, lumpia (ground pork egg rolls), mashed plantain spring rolls brushed with caramel sauce, thin slices of red grilled pork on a stick, enormous chicken wings, and shell-on shrimp, among other offerings, form a stunning edible landscape that in unlike anything else in Atlanta. And you get to eat it with your hands.

The meal finishes on a perfectly sweet note. Lau makes an unrivaled flan (that I wanted five more pieces of) and Biko, a dessert made of sweet rice, coconut milk, and palm sugar. As full as my guests were, we couldn’t pass these treats up.

So, how do you get in to this pop-up? It can be tricky if you are not addicted to your phone. Every month, Upper Room announces available reservations on its Instagram account, and seats sell out in minutes. The cost is $40 per person for a minimum of four people. If you want to drink, it is BYOB. If you want to get one of the eight tables available per seating, you need to email your name, phone number, and the number of people in your party to uprmatl@gmail.com and pray. If you don’t get in at first, keep trying. It actually took me two months to get in, but the long wait was well-worth the experience and the food.

Bantug says he would love to open a restaurant, but wants to take his time figuring out what works before taking the leap. The Upper Room also plans on introducing other family-style meals such as lechon and other stewed and saucy Filipino dishes down the road.

“My main metric is, ‘Did people have a good time, did they laugh, did they make memories?’ That’s what we want,” Bantug says. Judging by the reaction of my dining companions and the other tables around us, mission accomplished. 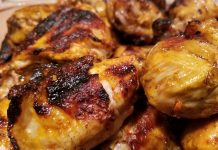