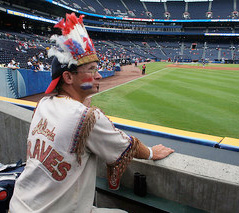 Who has it worse, Braves or Cubs fans? I posed this question to my Chicago-born husband this morning, six hours after my beloved Bravos blew a late lead over the Dodgers to lose their sixth straight division series. Is it more painful to limp home from the postseason year after year, or to (almost) never be any good at all?

You can’t compare the agony of another October’s collapse with the numbness of another summer’s mediocrity. Awful, both. But here’s why I think Braves fans have the edge. Cubs fans are known to be devoted, even storied in their suffering. They fill the seats of their iconic stadium in a beautiful old neighborhood and they talk about a billy goat.

Braves fans? Atlanta fans in general? We’re called tepid. Terrible, even. We don’t sell out games. We don’t have a cool curse. In fact, no one cares about our teams. No need to stick an Atlanta player in a sports drink commercial or nationally televised opening montage now and then.

If there’s a silver lining to last night’s season-ending Braves loss and season-damning Falcons loss (and Hawks exhibition loss, and Sunday’s Dream loss in game one of the WNBA Finals), it’s that maybe Atlanta fans will get a break. Maybe next time the playoffs roll around and a cluster of seats go unfilled in the nosebleeds, that jerk on MARTA won’t rag on how sucky our fans are.

Last year my husband and I attended the infamous play-in game against the Cardinals, the one where fans pelted the field with beer bottles and other ballpark refuse for ten minutes. Some in the media called us classless. My husband joked that if an ump made a call like that at Wrigley, people would be overturning cars.

But the garbage chucking wasn’t about a bad call. That game was already lost. It was about frustration. Because we do care, and a lot of us do show up, and maybe we want a little respect for eating the crap sandwiches our teams keep feeding us. Ten glorious minutes to purge demons that, far from dying, continued to slink around and haunt us and finally rained a torrent of hurt on our roofs last night.