Back on October 21, 2005, after years of hype, development heavyweights Jacoby and AIG Global Real Estate Investment Corporation cut the proverbial ribbon on 138-acre Atlantic Station, a mega-venture—large enough to have its own zip code—that had risen from a century-old steel mill’s ruins. The architecture and streetscapes were designed to evoke “authenticity,” as the development’s vice president put it at the time, and “some semblance of soul,” insomuch as IKEA, Dillard’s, and later, “singing planters,” could be soulful. Not since pioneering Colony Square, unveiled three decades prior, had Midtown seen a mixed-use addition of such scale.

Heralded as the nation’s largest brownfield redevelopment at the time, the private Midtown property overlooked a much different Atlanta. There was no Georgia Aquarium (it opened a month later), no Ponce City Market, no buzzy BeltLine restaurants, no Atlanta United, no Great Recession, no COVID-19. Braves veteran Freddie Freeman was a sophomore in high school, and Hawks dynamo Trae Young had just turned seven. Atlantic Station’s initial retail lineup included—longtime Atlantans, prepare to giggle—The Grape, Guess?, Claddagh Irish Pub, FOX Sports Grill, that big place with “cheesecake” in the name, and other bygone hotspots. Which is all to say: Times have changed, and especially in the past three years, Atlantic Station has been changing with them.

Atlantic Station set the regional template for how a massive, walkable, open-air hub of shops, eateries, trendy flats, hotel rooms, and office towers could be whipped up from scratch. That blueprint echoes today in places like Avalon, Forsyth County’s Halcyon, and The Battery. But Atlantic Station’s evolution hasn’t avoided turbulence, especially as the recession took its financial toll. It was criticized for being a chain-heavy outdoor mall, an elevated island disconnected from the intown fabric, a hub of unruly teens and petty crime, and then an urban shopping district that piped in country music in an attempt to clean up its image. But as the city’s economy and development surged from recessionary depths, a pivot came when Houston-based Hines acquired Atlantic Station for $200 million in 2015—and bold predictions about a new day weren’t far behind. “This project is going to change more in the next 24 months than it has in the past decade,” Nick Garzia, Hines’s former director of leasing, told this magazine in early 2018. Garzia left Hines this month to join CIM Group and lead retail, restaurant, and entertainment leasing for the multi-billion-dollar redo of The Gulch downtown, which suggests CIM bigwigs believe he got something right in Midtown.

On the eve of its milestone birthday, we caught up officials now taking the reins on Atlantic Station’s future—Holmes and Kristie Ray, director of marketing—for a Q&A about the nearly 3-million-square-foot project’s reboot, its influence, recent challenges, and the uncertain future ahead. Answers have been edited and condensed for space, with some context added.

Next week, it’s worth noting, the property will launch a new website and ad campaign branding it as “The Heart of Atlanta.”

Is Atlantic Station still a regional attraction, as it was in 2005? Or has the advent of other developments from PCM to Halcyon made it more of a neighborhood, Midtown, or intown hub?

Holmes: Since it debuted, Atlantic Station has been an attraction for visitors traveling in from other cities and states and those making their way from surrounding suburbs. We see more than 11 million visitors to our property each year, and those guests are looking for options like our flagship retailers, our convenient and diverse restaurants, or to take part in one of our 300-plus property events each year.

We continue to see regional visitors, such as for school or holiday shopping traditions. And we also serve as an intown hub for Midtown employees and college students looking for a delicious lunch, Atlanta United fans in need of the new kit, or just families in search of a day at the movies and then dinner. [Note: All screens at the recently overhauled Regal Atlantic Station are temporarily closed for COVID-19 precautions.] We’re delighted to provide an outdoor experience for Atlantans who are looking for safe ways to reenter the shopping and dining environment.

Though this year has been challenging, Atlantic Station remains one of Atlanta’s most highly sought-after mixed-use destinations and neighborhoods with new and exciting opportunities, as well as long-standing traditions for each visitor. Though new developments have and will continue to rise, Atlantic Station is special because it grows and evolves with the city.

What did Atlantic Station do for places like Avalon?

Holmes: At the time of its development, Atlantic Station was one of the largest mixed-use developments in the city. The neighborhood’s successful repositioning opened the door for new markets to thrive, but it also laid the groundwork for what a successful open-air development in metro Atlanta looks like.

Atlantic Station was one of the first in the city to attract national flagships to locations outside a traditional mall and combined those heavy-hitting retailers with local and national restaurant and entertainment options. Though it’s a private development, Atlantic Station has become ingrained in the community.

Homes: Hines first launched the massive property transformation in 2017 with the goal of creating a more meaningful, human-scaled environment with best-in-class retail, restaurant, and entertainment offerings. Since then, we’ve added over 96,000 square feet of retail and restaurant tenants, most recently the 12,000-square-foot Nike Store and 10,000-square-foot multicultural book store and cafe, Book Boutique.

How has Atlantic Station confronted COVID-19?

Ray: It hasn’t been easy for anyone, and we’ve seen some delays in openings, but overall, the Atlanta community is rallying, and we’re proud to be a part of this resilient city.

When the pandemic first caused the city to shut down, we, as with everyone else, had to cancel events as our tenants closed their doors and began pivoting to a new game plan. As tenants started to open their doors for outdoor dining and carry-out, we wanted to show support and begin to drive traffic back to the center. We took the attitude of, ‘When you’re ready, we’ll be ready for you,’ and shared the new safety measures.

We got creative and began offering a picnic program through our concierge for those who wanted to eat on the Atlantic Green. We’re debuting a walking history tour that highlights Atlantic Station’s history, as well as Atlanta’s history. And we’re focusing on ways to safely attract visitors to the district in ways they can enjoy on their own time—such as with our art initiative, which will include the Unity Art Exhibition, featuring murals by five local artists, and a giant new Thomas Turner mural that faces the Connector. 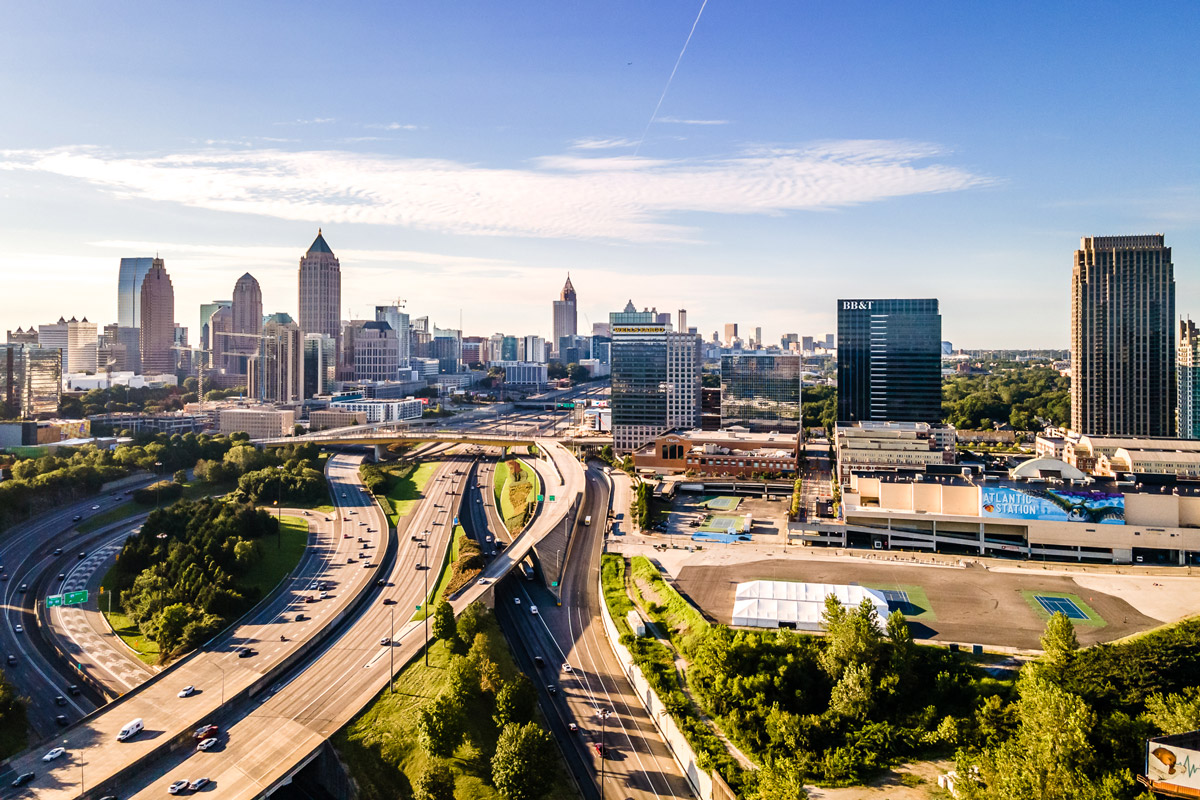 What does the near-term and distant future hold? Is there a specific timeline for finishing Atlantic Station, so to speak?

Ray: Atlantic Station will continue to adapt and mold to the needs of the community. There is still about 9.5 acres left to be developed, including the lot where the future AMLI Market Street will soon be underway in 2021. [That’s a planned apartment building that previous renderings have indicated will peer down on the Connector, in a space where BB&T Atlanta Open tennis tournaments have been staged.]

Hines is also evaluating the open space known as ‘Block B’ that sits between Atlantic Tower and Atlantic Yards that is perfectly positioned for future office development, along the edge of the project nearest to Georgia Tech.

After 15 years, do you find that people, especially younger Atlantans, appreciate Atlantic Station? In fairness, it’s a pretty stark contrast to the brownfield mess that was there before.

Ray: We recently did a call for AS memories on our social media channels, and you’d be amazed by the number of engagements, first dates, family dinners, and events people from across the region mentioned.

The neighborhood has adapted to meet the city’s needs and has experienced growing pains along the way. [But] we believe the city, and the younger demographic specifically, will experience Atlantic Station in a new way. We’re reintroducing the property to the city and urge those who haven’t visited us in a while to stop by and take a second look—safely.

To commemorate the 15th anniversary, Atlantic Station is launching a free, audio-guided walking tour for guests later this month to highlight key moments in the project’s (and city’s) history. It’ll be 5,745 feet long—one foot for each day Atlantic Station’s been open. Find more details here soon.