Lil Nas X, the rapper whose single “Industry Baby” is currently the No. 1 song in the country, walked into the event space at The Gathering Spot and immediately began dancing. Partying his way through the crowd of people who were gathered to celebrate his success, he gently motioned for people to put their phones away. This was a special moment to be enjoyed, not captured for later.

The pop star was born and raised in Atlanta, living in the former housing project Bankhead Courts before creating one of the biggest songs of 2019 (and, well, in history), the country-trap hit “Old Town Road.” Releasing his debut album, Montero, earlier this year, Lil Nas X was out to prove that the success of his first hit wasn’t just a fluke. Montero topped the Billboard 200 chart, and two singles from the album, “Call Me By Your Name” and, most recently, “Industry Baby” have topped Billboard’s Hot 100.

Still, despite being from one of Atlanta’s major musical cities, Lil Nas X hasn’t had many moments that nod to his local roots. The October 20 event at The Gathering Spot was the first major event where both city officials and local musical icons celebrated the 22-year-old’s contributions to Atlanta’s musical legacy.

Dallas Austin, the legendary producer whose early work for artists such as TLC, Monica, and Another Bad Creation helped elevate Atlanta’s musical scenes in the ‘90s, hosted the event. At one point Austin played a video that included a montage of some of the city’s biggest artists in R&B and hip-hop, including Lil Nas X—to the delight of the audience—over the Jermaine Dupri hit “Welcome to Atlanta.”

“This is a homecoming,” Austin said, before noting that no Atlanta artist has won an Album of the Year Grammy since Outkast’s Speakerboxxx/The Love Below in 2004. Austin says he hopes artists like Lil Nas X can change this. “We gotta reclaim our real shit. We work real hard at our culture here to make sure our culture stays dope and fresh, and everybody can bite it. Everybody can take a piece of it when they need it. But, it’s cultivated by Atlanta.” Kandi Buress of Real Housewives of Atlanta and singer Chloe Bailey, who was raised in Atlanta before signing to Beyonce’s Parkwood with her sister, Halle, were also in attendance.

Atlanta’s city council paid homage to the musician, too, with Councilman and mayoral candidate Antonio Brown presenting Lil Nas X with a proclamation that declared October 20, 2021 as Lil Nas X Day in the city.

“This is amazing. I would never have imagined I would be here four years ago when I was at my sister’s house on the floor,” Lil Nas X said after being presented with the proclamation. Then, in true Atlanta fashion, Austin and Lil Nas X declared it was time to celebrate by Swag Surfing on the stage.

The event wasn’t just about Lil Nas X, though. As he’s done throughout the promotion of Montero, he used his platform to elevate organizations with ties to the LGBTQ+ community. Gilead Compass Initiative, a collaborative organization that works towards “[reducing] HIV/AIDS-related disparities in the southern U.S.,” co-hosted the gathering and organized a choir to perform a medley of Lil Nas X’s songs. The group included singers from the LGBTQ+ community, allies, and faith leaders.

Prior to The Gathering Spot event, Lil Nas X visited with youth and families who are affected by HIV during an event on Ponce De Leon. He also met with Thrive SS, a Gilead Compass Initiative grantee that works to “improve health equity for Black gay men living with HIV through direct support, advocacy and building collective power.” The nonprofit was one of several organizations that the musician promoted throughout his album rollout. In total, Lil Nas X’s donation campaign has helped to raise more than $100,000.

According to a press release from Columbia Records, the label that signed Lil Nas X, the homecoming festivities for the artist will also include billboards that will be displayed throughout the city. 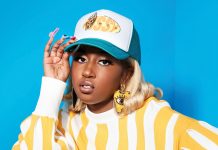 Fresh off a TikTok takeover, Yung Baby Tate sets her sights on television