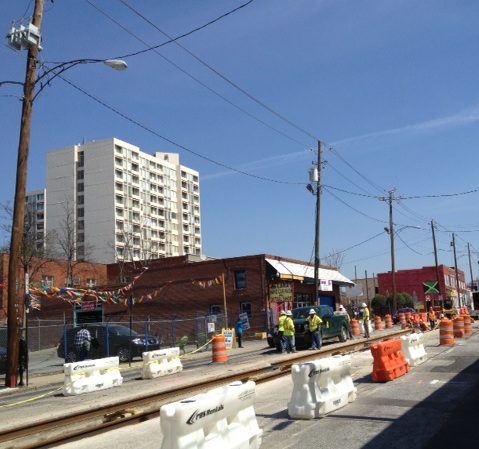 Okay, everyone who claims to support transit alternatives in Atlanta: Here’s a great chance to put your money where your mouth is.

Atlanta Streetcar work is progressing—oh-so-slowly but steadily—and so is work on the Atlanta BeltLine. But while all of this is underway, it means major hassles for businesses in the Sweet Auburn corridor, especially those directly on Edgewood and Auburn avenues.

There was good news for the area this week when it was named an Opportunity Zone, which will give businesses tax credits for new hires. But those benefits are long-term, and the businesses could use your help now.

For a year, the entrepreneurs of the Edgewood and Auburn corridor have contended with disruptive utility work. Now that streetcar track is actually being laid (hooray!) things are only getting tougher—with lane closures and fleets of heavy vehicles blocking storefronts.

And things will get worse before they get better. Next month, work is scheduled to start on the Edgewood Avenue bridge that crosses the eastside BeltLine extension. Edgewood will be shut between Randolph and Krog streets, making the Krog Tunnel bottleneck tighter as traffic is diverted to DeKalb and Irwin. (Click here for detailed plans of the construction zone.)

The Edgewood bridge work is scheduled through April 2014. Add that to the ongoing—and delayed—streetcar construction and you can imagine the challenges businesses in the area will face.

In the long-term, the BeltLine and streetcar, along with those tax credits, will boost historic Sweet Auburn/Old Fourth Ward. But for the coming year, it’s going to be pretty daunting.

I’ll be posting a comprehensive list of businesses in the district. But for starters, consider these destinations on what’s shaping up to be a glorious spring weekend:

I just got back from walking to lunch at the curb market, and have to say Arepa Mia and High Road ice cream hit the spot.