From The Gift of Southern Cooking by Edna Lewis and Scott Peacock, Alfred A. Knopf

Instructions
1. Put the milk, 1 cup of heavy cream, and the vanilla bean into a nonreactive saucepan. (Do not split the vanilla bean, just twist and bend it a bit to bruise and release its oils.) Heat slowly until the milk and cream are just below a simmer, then cover and remove from heat, and allow to steep 20 minutes.

2. Meanwhile, put the egg yolks in a bowl, and whisk in the sugar, followed by the flour and the salt, mixing until there are no lumps and everything is completely smooth. Remove the vanilla bean from the steeped milk and cream, and slowly whisk into the egg yolks. Return the mixture to the saucepan, and cook, whisking constantly, over moderately high heat until the custard thickens and begins to bubble. Be sure to whisk all over the bottom of the pan as well as along the bottom edges. Cook for 1 minute after the custard begins to boil, then remove from the heat. At this point, it should be very thick. Strain through a fine-meshed sieve into a mixing bowl, and immediately whisk in the remaining 1 cup of heavy cream and the vanilla extract.

4. To assemble: Spoon a thin layer of the custard onto the bottom of an 8-cup ovenproof baking dish. Top with a layer of cubed angel food cake and sliced banana. Spoon more custard over, and continue layering, ending with custard spooned over the top.

5. Making the meringue: Put the egg whites into a spotlessly clean bowl. Beat the whites slowly until they become frothy. Add the vanilla, and continue beating until the egg whites just begin to form soft mounds. While still beating, begin sprinkling in the sugar 1/4 cup at a time, beating only until each addition is incorporated before proceeding to the next. When all of the sugar is incorporated, beat the egg whites until they are moist and very glossy and hold peaks that are firm but still bend when lifted on the end of a whisk.

6. Immediately spoon the beaten egg whites over the surface of the assembled custard, and using a spoon or spatula, spread the whites to the edge to make sure you get a good seal between the meringue and the sides of the baking dish. Work quickly to make decorative swirls and patterns in the meringue, and put the dish immediately into the preheated oven to bake for about 5 minutes, until golden brown. (Be sure to check after 2 minutes to see how the meringue is browning, and turn the dish from time to time, if needed, to ensure even browning.) Serve the banana pudding warm or at room temperature. 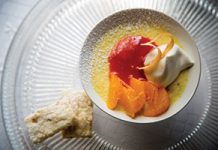 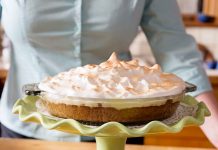