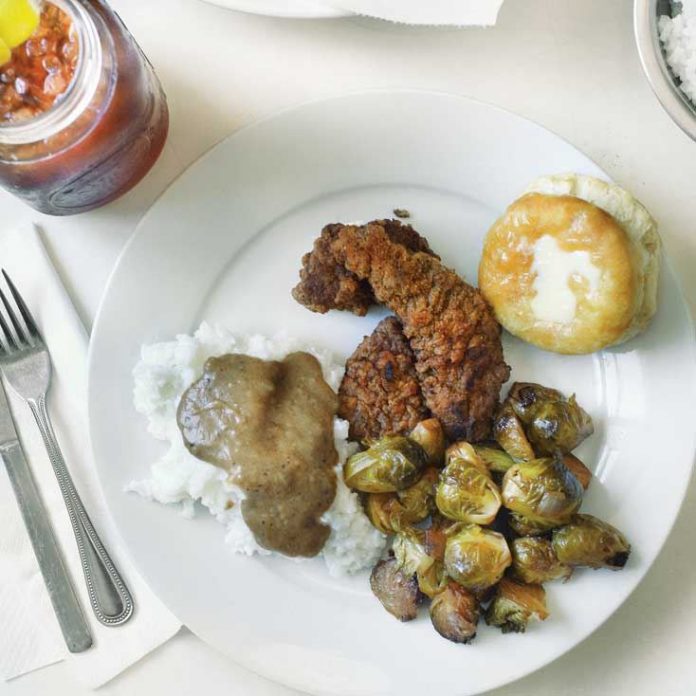 At the flagship Highland Avenue location of Stacey Eames’s Highland Bakery, country-fried steak Benedict arrives at the table with the crisp, battered beef paired with poached eggs atop a giant biscuit smothered in jalapeño–cheddar cheese sauce. The hearty dish fits in with the restaurant’s diverse, urbane vibe as easily as the housemade granola and tofu scramble. Its origins (minus the eggs and the cheese sauce) can be traced straight back to Eames’s small-town Georgia upbringing. “I started making biscuits and country-fried steak with my grandmother, Mama Betty, when I was just a tiny little girl,” says Eames. She was born the same year her parents opened the Hit and Run, a meat-and-three cafe in Albany serving the Southern staples that also appeared regularly on her extended family’s Sunday dinner table. Country-fried steak (also known as “chicken-fried steak”) was a simple, satisfying hit at the restaurant and at home.

The cafe’s name was a play on her late father’s status as a hometown baseball hero. Paul Eames played for the St. Louis Cardinals farm team, and later served as recreation director for the City of Albany for twenty-eight years. “My parents got married on the baseball field, at home plate,” Eames says.

Eames spent much of her childhood at the cafe, and recalls how “every day at lunchtime, there would be lines of customers wrapped around the building. We had probably ten ladies working there with arms as big as thighs from kneading biscuits. It was the kind of place where the mayor would be sitting next to a construction worker.” Eames also helped with the other family businesses, selling Christmas trees and running concessions at sporting events. “I learned to count by counting back change from snow balls,” she says.

After studying radio and film at Valdosta State University, Eames traveled the country working for a real estate management company before switching careers and setting up the first of many coffee carts in Atlanta. Soon she added pastries. And by 2004 she had a full-fledged restaurant. “I always said the coffee business was as close as I wanted to get to following in my parents’ footsteps, but things just kind of happened,” she says.

Eames’s tastes and dietary habits have evolved quite a bit since she left the nest. A fitness buff, she eats mostly organic, unprocessed foods and has been a pescatarian for years. But when she goes home, her mom, who just retired from running a school lunchroom after forty-two years, still makes her favorite childhood meals. “My mom became very accommodating,” she says. “She cooks with veggie base and spices instead of pork when I come to town.”

At home in Decatur, she still cooks country-fried steak for friends, the old-fashioned way with a simple pan gravy. “I make the one for me with tempeh or tofu.” Along with white rice or mashed potatoes, she serves it this time of year with Brussels sprouts, sauteed in butter with a little onion and seasoned with a balsamic reduction.

Instructions
1. Prepare: In a large bowl, whisk together the flour, seasoning salt, pepper, and paprika.

2. Pour 1/3 cup of the oil in a large cast-iron skillet and heat on medium-high until it begins to smoke. Slightly wet the steak pieces by quickly running them under water from the tap, and drop them in the flour mixture to coat, shaking off excess. Drop the pieces into hot oil, taking care not to crowd the pan, and cook in batches, turning each piece twice, until crispy on all sides. Transfer to a platter lined with paper towels.

3. Make the gravy: Add 3 tablespoons of the oil back to the skillet. Over medium heat, sprinkle 3 tablespoons of the flour mixture into the oil and whisk until it starts to thicken. Add a few tablespoons of water until it starts to loosen up. (For a creamier sauce, feel free to substitute milk or cream for part or all of the water.) Continue adding 1/2 to 3/4  cup liquid and whisking until you have achieved desired consistency: For thinner gravy, add more water; for thicker gravy, whisk in a little more flour mixed to a paste with an equal amount of cold water. Cook until bubbly.

4. Serve over steak and rice.

This is an extended version of an article that originally appeared in our January 2013 issue.