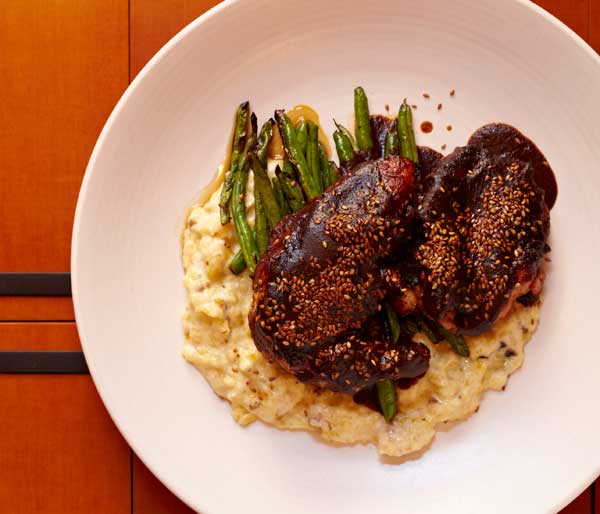 I worry over the impressions that Downtown restaurants leave on tourists and conventioneers. Most of these places, particularly along Peachtree Street, are terrible—soulless chains and outdated theme concepts that stay afloat serving food that was totally rad in 1988.

These, I want to cry to visitors gazing at menus along the sidewalks, are not accurate reflections of our city’s dining scene. And since Atlanta magazine’s office resides along this corridor, I count myself among the many frustrated workers who yearn for lunch options that show some personality and creative investment.

So when word went out last spring that Fifth Group Restaurants was planning to open a contemporary Mexican showstopper in the One Ninety One Peachtree Tower, it became the buzziest Downtown restaurant news in years.

Fifth Group operates tried-and-trues like South City Kitchen, La Tavola Trattoria, and Ecco, but it also has a history with Mexican cuisine. A decade ago it launched Sala in Virginia-Highland, which served glorious margaritas but always struggled with striking the right harmony between traditional Mexican and more accessible Tex-Mex fare. The company closed Sala in 2008, replacing it with the family-friendly, fajitas-for-everyone Original El Taco.

For the Downtown project, Fifth Group recruited Chad Clevenger, who worked with star Southwestern chef Mark Miller at Santa Fe’s Coyote Cafe before cooking—as executive chef and eventually chef-owner—in Denver restaurants that dabbled in Mexican flavors. When he arrived last summer, the Fifth Group partners made sure to revise early press release language that stated the restaurant would serve traditional Mexican cuisine: Alma Cocina (which translates, ignoring the mangled Spanish syntax, as “soul kitchen”) would instead offer “modern Mexican with Latin influences,” a clarification that helps sidestep the whole squishy, nebulous issue of what qualifies as authentic cooking and what doesn’t. Ceviches, tacos, tamales, chiles rellenos, and Oaxacan moles would all clearly be filtered through Florida-born Clevenger’s inventive sensibilities.

How does this angle play in its early run? Mixed, but with loads of potential.

The company certainly learned from the missteps of the space’s former tenant, New York–imported Il Mulino, which felt both overpriced and overly formal for the patchy quality of its Italian-American efforts. Alma Cocina is casual and bouncy, with more substantial dinner entrees ranging from $12 to $28 and lunch plates generally around $6 to $16.

A playful, vaguely Western motif ripples through the dim dining room. A wall of cement blocks formed in swirly geometric shapes suggests a California midcentury-modern rancher. A mounted steer’s head is flanked on either side by antique cocoa pots that resemble giant, shriveled, red and black heirloom tomatoes. I love the light fixture over the bar in the shape of an agave plant. No subliminal messages here: You will drink tequila.

Restaurants housed in office buildings often try to devise ways to help patrons forget the outside world, but Alma wisely takes the opposite approach. A second bar and a sectioned-off expanse of tables spill from the restaurant into the One Ninety One atrium, tempting suited passersby to break for margaritas.

And this would be the ideal spot to get sloshed in the middle of the day, “Mad Men”–style. Vajra Stratigos, Fifth Group’s beverage director, has built on the finesse of Sala’s drink program with beauties like the Amatitán—smooth Herradura double-barrel reposado with orange curaçao and a blend of citrus juices. A brilliant cocktail called Mr. Winston Salem alchemizes tobacco-infused tequila, Del Maguey Crema de Mezcal, vanilla brandy, and pineapple juice into a sweet and smoky potion. Here’s hoping it comes up as one of the rotating $5 drink specials during weekday happy hour from 4 to 6 p.m.

Sweet and smoky also dominates as a flavor profile in the starter dips. The restaurant offers a solid, basic guacamole, as well as a variation in which soft cubes of butternut squash, chipotle salsa, and a sprinkling of queso fresco crown the avocado. I saw plenty of customers enjoying it, but after three tries I still found the squash’s squishy texture jarring and alien. Salsas come in a sampler: fire-roasted tomato, tomatillo-avocado, salsa negra (chipotles and garlic), and mango-habañero. Each possessed distinct levels of spicy acidity, though none particularly dazzled. And the array of fancy tropical chips—plantain, yucca, malanga coco, and (heads up, vegetarians!) chicharrones, aka fried pork skins—arrived greasy and in some cases flimsy.

The need for small but crucial calibrations was a constant theme during my meals. I’m aching for a righteous salad that I can eat at the bar during lunch, but I haven’t found it yet. A mango salad was mostly a mass of underdressed iceberg lettuce with hidden shards of grapefruit, mango, and avocado, with a ho-hum handful of crisped tortilla strips. And the Granny Smith salad with romaine, radicchio, wisps of Manchego, and a few grains of crispy (read: strange, toasted, uncooked-tasting) quinoa in a faint honey-lime vinaigrette never coalesced as a flavor unit.

Ceviches missed their marks to varying degrees. Slivers of yellowtail in cucumber-serrano water with snowy coconut granita will refresh wondrously in the summer, but it cried for more acid and salt. Bay scallops drowned in a ruddy puddle of blood orange juice, wrestling with an unruly knot of red onion slices.

I know Clevenger is capable of sublime composition. I encountered it in his fried avocado taquitos—mini corn tacos on which hunks of thinly battered avocado sat poised with roasted tomato, poblano pepper pesto, and crumbly Cotija cheese. The kitchen likewise scored with other taquitos (carnitas, lamb, shrimp). I’m not as fond of the huaraches—sandal-shaped tortillas topped with ingredients like braised goat or rock shrimp. I prefer huaraches to be thick, lusty boats of masa dough rather than flat, demure sheets of corn flour like these.

And speaking of demure, I found the take on mole amarillo, served under red snapper, maddeningly prim. It could easily have been called yellow pepper coulis. It lacked the heady, layered complexity that defines moles. That intricacy did show up in the elusively sweet, cocoa-colored Oaxacan mole over roasted chicken that our server endorsed enthusiastically. She was right about the light, crisp churros for dessert, too.

If I tallied quite a few quibbles about the food, let me reaffirm that the atmosphere, the cocktails, and the impressively professional service already add up to the most accomplished restaurant to open Downtown so far this decade. I’ve noticed in the past that it can take Fifth Group up to a year to fine-tune a new restaurant, but that excellence does often prevail. I’m praying for it at Alma. In the meantime, I’ll find contentment at its happy hour.  –Bill Addison

Photograph by Deborah Whitlaw Llewellyn. This review originally appeared in the March 2012 issue.