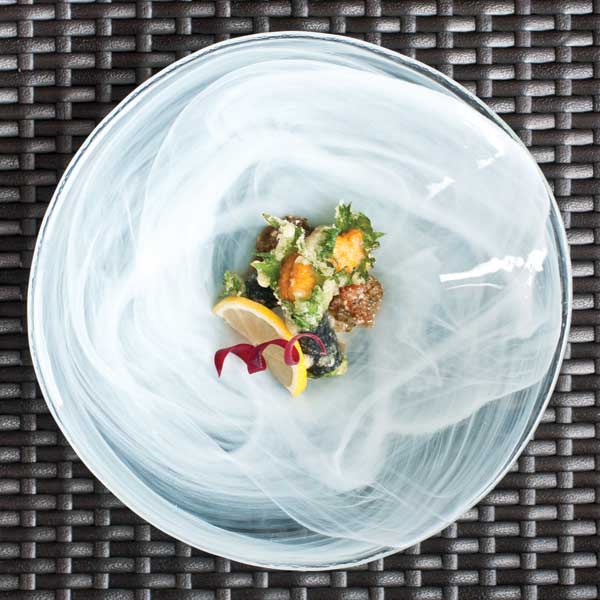 The first time I visited the recently relocated Tomo, I waited in a valet line full of luxury sedans, gave the reservation name to a statuesque hostess in a slinky dress, and stared, slack-jawed, into the dining room’s shimmery vastness. And then, dwelling on the jarring contrast between this reinvention and the humble, intimate, sadly defunct original on the other side of town, I thought: They’ve ruined this restaurant.

It was, in retrospect, an overreaction. I shouldn’t have been so shocked by Tomo’s transformation from a Vinings strip-mall sushi bar to a sleek Buckhead show palace. Chef-owner Tomohiro Naito’s culinary personality, a Japanese fusion sensibility honed in Las Vegas, was always too colossal to fit comfortably within a suburban shopping complex.

But I loved how that nondescript space (opened in 2005), with its circle-patterned banquette and track lighting, yielded center stage to the food. Your eyes stayed on the sculptural beauty of Naito’s signature sashimi and sushi compositions like usuzukuri—tapered slivers of fluke splayed like peacock feathers, dressed with dots of Sriracha and mizuna leaves and paired with citrusy ponzu jelly. And even though the place was well-known to lovers of Japanese cuisine, reserving a spot at the eight-seat sushi bar for omakase (a chef’s choice progression of small, exquisite dishes) still felt like an insider’s indulgence.

It turns out the move, in the works for more than two years, could not have been better timed. Buckhead fans of sushi and Asian fusion were angling for a new hangout. Bluepointe—long a glossy Pinnacle Building refuge in which to snack on edamame, barbecued eel roll, and pork pot stickers—closed at the end of last year due to a lease dispute. And glittery MF Buckhead, home to sushi maestro Chris Kinjo, was forced to liquidate in February after filing for bankruptcy. It didn’t take long for the reservation books to start filling at Tomo’s new home in the building it shares with the Ritz-Carlton Residences, only a couple of blocks from Phipps Plaza.

The design certainly appeals to the Buckhead aesthetic. Chandeliers with fixtures shaped like trumpet mushrooms herald your arrival. Lofty walls of glass flank the narrow space, occupied on the right by a cocktail bar that segues into a sushi bar, with cream-colored booths on the left. Recessed lighting spills down from a drop ceiling painted a hue somewhere between peach and persimmon. Voices ricochet off black slate floor tiles, but noise dampeners help keep the din at a just-bearable level. The splashy hodgepodge of style elements is a modest homage to the Nobu restaurants overseen by Naito’s former employer, Nobuyuki Matsuhisa, who gained global attention in New York in the mid-1990s for his culinary synthesis of Japanese, Peruvian, and American flavors.

Naito worked in Nobu’s Vegas outpost (one of two dozen worldwide) for three years, and the influences at Tomo are apparent, especially in the fondness for pairing pungent sauces, chiles, and a blend of Eastern and Western ingredients with impeccable seafood. And Naito didn’t choose Buckhead randomly: He needed an audience who could afford his food. Two recent dinners for three people sharing roughly a dozen dishes (mostly appetizers, an entree, several selections of sushi, and a couple of desserts), with a round of cocktails and a small bottle of sake, cost around $400 both nights.

Worth it? Yes, mostly. The restaurant opened in October, and, like me, the staff took time to acclimate. The attentive servers who worked at the Vinings site seemed at first overwhelmed by the grander space, and the timing and precision of an expanded kitchen crew needed fine-tuning. Six months in, their rhythms have synced much more cohesively.

Order a flurry of plates at once; the staff knows how to pace a meal in a sequence that makes sense flavor-wise. Plump, briny shigoku oysters often head a short list of daily specials: Dashed with yuzu (a Japanese citrus more aromatic and slightly sweeter than lemon), cilantro, and a tiny bit of chile, they calibrate the palate for the courses ahead.

The standouts from Naito’s former menu reappear in the same polished form. Ankimo terrine, a creamy pâté of monkfish liver, sits among dollops of frisky ponzu jelly. Delicate rectangles of kampachi, a variety of yellowtail, bathe in yuzu-soy sauce and garlic, crowned with sliced rounds of serrano. Morsels of broiled miso-marinated cod rest on Boston lettuce leaves with garlic chips; wrap the leaves over the fish and savor the flood of sweet and earthy tastes.

Lobster a la Musso may be Naito’s most extravagant creation: Lobster sashimi and uni (intense, creamy, sweetly saline sea urchin) arrive awash in yuzu ponzu, extra virgin olive oil, sesame oil, and a hint of white truffle oil, finished with ginger, garlic, scallion, and a raw quail egg. I’m even fonder of Tomo Urchin, which takes the taste buds straight to Funkytown: Uni tempura is wrapped in seaweed and shiso (a sharp herb in the mint family), then dipped in Naito’s tomato-shallot salsa. Each small morsel rushes over your senses in a piquant gush.

I’ve even grown to enjoy some dishes I didn’t love when Tomo first launched in Vinings. My mind still wants to reject a wholly untraditional garlic yellowtail roll that includes red pepper, micro greens, roasted garlic, and, oddest of all, a sake-Gorgonzola sauce—but I have to admit now that the ingredients merge symphonically. The description of the New York strip entree with teriyaki demi-glace misleads: The beef is strangely chopped into squares, but the result is much less chewy than I previously experienced.

A few items did fall flat on recent visits. A jumbo soft-shell crab roll lacked the smack of freshness; that specialty should only be served in season. The jalapeño-garlic sauce under a sliced roll of snow crab wrapped in cucumber tasted undersalted and more vegetal than spicy. And, though they’re clever, I wasn’t a fan of the gelatin-based desserts by Tomo’s wife, Kimiko, such as the “mango sunny-side-up egg” made of coconut and mango panna cotta with a wavy piece of crepe that resembles a slice of bacon. I much preferred the simpler sweets like yuzu sorbet or her thin, crisp almond cookies.

The omakase, for me, remains the supreme Tomo pleasure. Name the price (often between $100 and $150) and nine or ten courses appear, including riffs on menu dishes with upscale ingredients—say, oysters or uni topped with caviar—and ending with sublime nigiri sushi, each finger of rice seasoned in a way that magnifies the pure flavor of the fish draped over it. I’ve come to covet a curved, four-seat nook at the end of the sushi bar in the back of the restaurant. It’s the space where I can once again dreamily escape into a private world to relish the singular creations by one of Atlanta’s finest chefs. —Bill Addison

Photograph by Caroline Kilgore. This review originally appeared in the April 2012 issue. 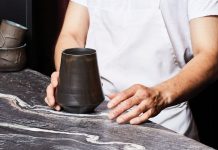