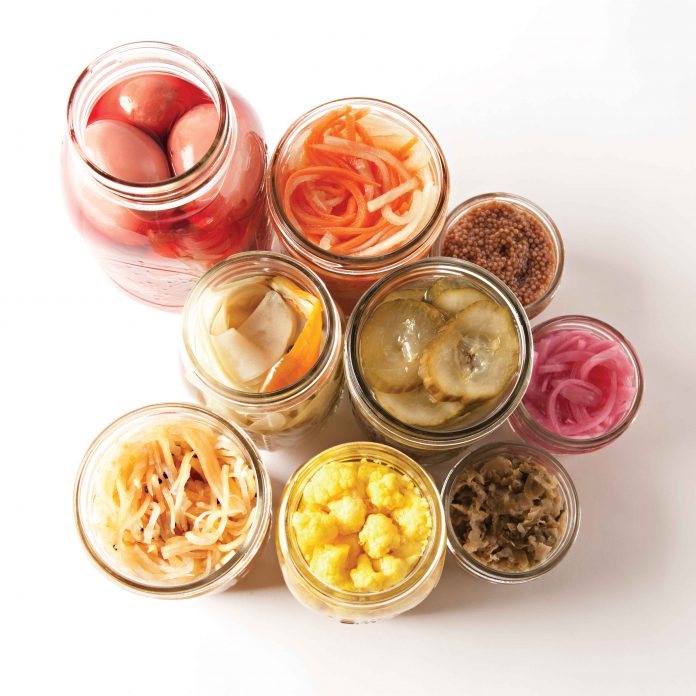 “We can pickle that!” exclaim a duo during a skit on IFC’s trend-skewering hit Portlandia (which you can easily find on YouTube). The pair grab increasingly bizarre items—ordinary cucumbers and eggs, then a dropped ice cream cone, unwanted CD jewel cases, a broken high heel—and seal them all in jars, dunked in a vinegary bath.

The show may satirize Portland’s over-the-top proclivity for all things artisanal, but it isn’t just the Pacific Northwest that’s gone pickle crazy. In Atlanta’s professional kitchens, chefs have embraced pickling as an extension of the time-honored Southern tradition of “putting up”—canning fruits and vegetables in a frenzy at the peak of their season. Walk into many of the city’s ambitious restaurants and you’ll notice rows of Mason jars full of pickled local produce that double as decor.

Recently I sat at the bars of several hot spots, asking servers if they could bring me an assortment of the pickles on hand. Each place came up with at least ten samples of house-made pickled vegetables and fruits. For example, at one of the trend’s earliest adopters, Empire State South, I tasted sharp little ramps, split okra, quartered green tomatoes, gently sweet bread-and-butter pickles, firm carrots cut into batons, kimchi that almost fizzed from fermentation, whole dilled green beans, and two kinds of preserved mustard seeds.

Drew Van Leuvan, chef and co-owner of Buckhead’s Seven Lamps, pickles carrots sealed in plastic bags in a sous-vide bath and makes intense, Japanese-style salt-pressed cucumber pickles, which he cans in hot sauce—later adding them to, say, a batch of freshly cooked Sea Island red peas. “Pickling is about more than extending the growing season,” he says. “It’s another way to layer textures and flavors.” To begin meals at his restaurant, Van Leuvan often sends out pickled haricots verts, dilled cucumbers, or tarragon-scented baby carrots paired with a jar of whipped crème fraîche. “I love how the creaminess balances the tartness,” he says.

“I’m not so much interested in storing pickles,” says chef Eric Ottensmeyer, chef at Leon’s Full Service. “I go through them quickly, often using them to garnish plates.” He produces a stream of pickled onions, Swiss chard, Brussels sprout kraut, strawberries, jalapeños, cauliflower, and chayote squash in spicy vinegar. He finishes a plate of redfish over “middlin’” (broken) rice with preserved lemon, and uses pickled mustard seed to cut the richness of beefy cheddarwurst sausage. His next project: pickled shrimp, steeped in hot brine before chilling and canning.

Once you start looking, you find pickling is part of the global culinary arena: Japanese oshinko made with burdock root and other vegetables at Sushi House Hayakawa; fiery lemon pickle to accompany biryani at Cardamom Hill; and Chinese preserved mustard greens and Russian pickled herring, both found at Buford Highway Farmers Market. Drew Belline, chef and partner of Decatur’s No. 246, makes fennel agrodolce, an Italian sweet-and-sour sauce that quick-pickles with vinegar and sugar.

Returning to Southern culture, I haven’t yet found any chefs making their own preserved pig’s feet (an old-timey staple), but I am willing to bet there is someone out there already thinking, “I can pickle that!”

Photograph by Emily Dryden. This article originally appeared in our May 2013 issue.