More than three years after it was first announced, the brick-and-mortar version of the Real Mexican Vittles pop-up, D Boca N Boca, opens in Summerhill on June 17. After being buried in construction and permitting delays, owner/chef Helio Bernal is proud to finally share the dishes of his grandmothers.

“My goal is to continue their legacy,” he says.

In doing so, he’s designed a menu of food inspired by the Gulf regions of Veracruz and Yucatán, as well as the flavors of Mexico City. Expect six varieties of tacos served on housemade tortillas, plus mushroom escabeche, chipotle meatballs, tomahawk steak, and whole grilled snapper. The guacamole is made with smoked pepitas and topped with pomegranate, and six salsas are available for tasting.

Mezcal and tequila flights come with pairings (like funky cheese and fruit.) Beer ranges from local (Eventide Kolsh and Terrapin Los Bravos) to Mexican (Sol lager and Carta Blanca). Spiked seltzers and wine will be available, too.

The 50-seat interior is intended to feel like Tulum, complete with plants, elements of wood, brick, and cement, and culinary books. A vibrant patio seats another 50 diners with firepit tables and high tops.

For the first month, D Boca N Boca will serve dinner only. After that, it will offer lunch on Fridays and Saturdays, plus Sunday brunch. 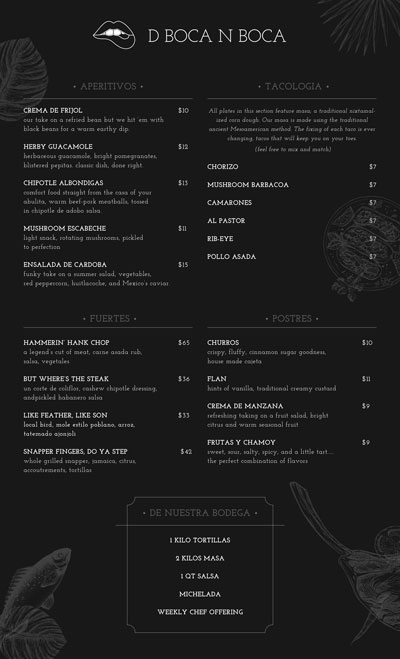 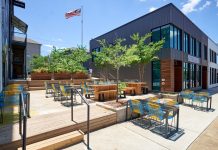 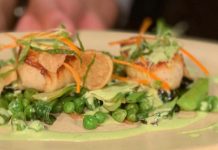