Chef Joey Ward has been known for years as Gunshow owner/chef Kevin Gillespie’s right-hand man. That’s about to change.

Ward is opening his first restaurants, Southern Belle and Georgia Boy, in the vintage Poncey-Highland plaza next to Majestic Diner. The side-by-side restaurants, which will open on November 13 and November 20, respectively, are homages to Ward’s wife and grandfather and are inspired by the opposing styles of cooking he did at Gunshow.

“Southern Belle is a crowd-pleaser with big flavors—salt-of-the-earth-type food. It’s not tweezer food,” Ward says. “The other half is really conceptual. I enjoy both equally, and both are as important, so I decided to do both.”

Southern Belle has 45 seats, and the old-world décor has rich woods and exposed brick. There’s also a beer garden-esque patio with a 40-foot picnic table, artificial ivy, and twinkle lights.

On Sundays, Southern Belle will host a “Sunday Funday” of sorts. “I hate working on Sundays,” Ward says. “If I didn’t have to work, I’d go with my wife and friends to Buford Highway and eat and drink on a patio. Since I have to work, I want it to feel like that.”

He’ll pull out a Big Green Egg and make sausages, al pastor tacos, and Jamaican curried goat with roti, for example. “Fun things we’d want to eat on our day off,” Ward explains. These items will be offered in addition to the regular menu.

In contrast to Southern Belle’s choose-your-own-adventure menu format, Georgia Boy will offer two $125 tasting menus (regular and vegan) updated twice a season. Reservations are required and include 16 composed courses. There will be four seatings per night, each for a total eight diners.

Georgia Boy patrons will enter through Southern Belle, first by stepping into Georgia’s Boy’s lounge. Here, they’ll be offered drinks from the Southern Belle menu and served snacks and amuse bouche. Removing a copy of James and the Giant Peach from the bookshelf will unlock a secret door that leads into the modern, sleek kitchen that also serves Georgia Boy’s dining room.

“The symbolism is I’m inviting people to come inside my peach pit—a space with no windows—where I’m taking you on this magical adventure,” Ward says. “Here, the food is fun and whimsical and plays on the inner child in everybody.”

Georgia Boy is designed to feel like a dinner party at Ward’s house. Cooks—including Gomez and Ward—will introduce the food. Ward says to expect multi-sensory experiences. For example, “we might release the aroma of fall spices using dry ice on the table while you eat a dish made of pumpkin,” he says.

Both Southern Belle and Georgia Boy are designed to have zero food waste. They’re providing leftovers to local farms to use for compost, and partnering with nonprofit Goodr to give leftovers to those in need. They’ll even host a quarterly dinner for those who can’t afford to go to restaurants.

“There’s been closings of multiple homeless shelters around here in the last couple of years. We want people to feel taken care of,” Ward says. “It makes sense to feed people. That’s what I got into the business for.”

In addition, Ward is using his platform to try to change the status quo for restaurant workers. Cooks will get two weeks of paid vacation a year, and all days off will be back-to-back.

“We’re supporting mental health by creating a positive environment,” he says. “We have the best job in the world. We essentially get to throw a party for strangers every night.”

Check out the menu and cocktail menus below (tap to enlarge) 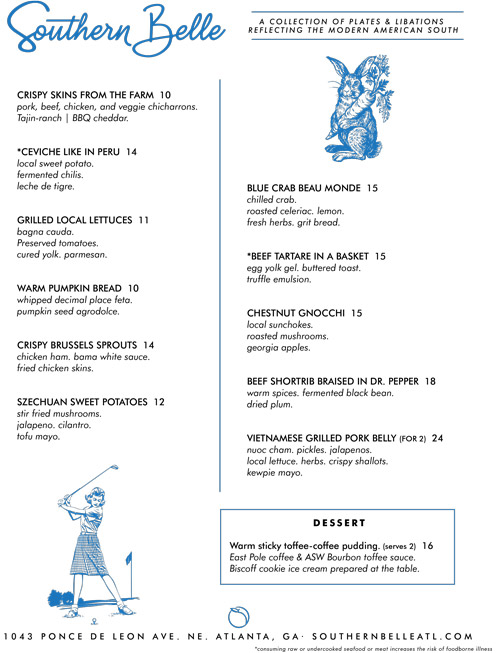 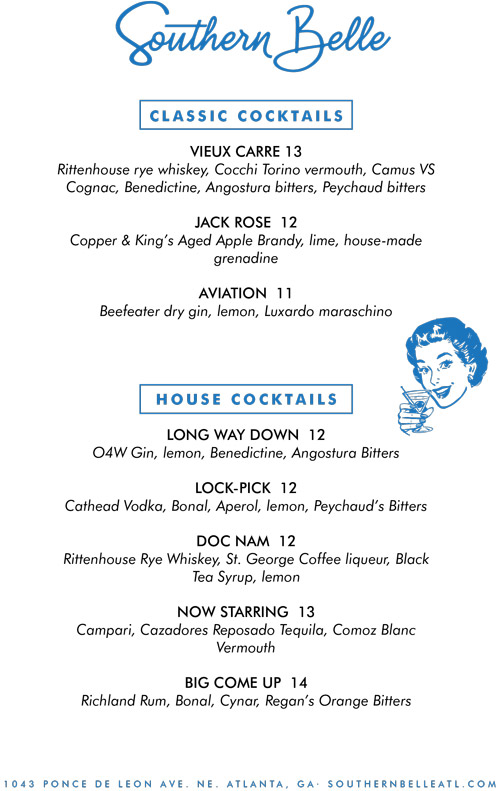