When Bacchanalia moved in 1999 from a Buckhead bungalow to an industrial space on the Westside, it was considered revolutionary. Then and now, Bacchanalia remains one of the city’s most significant fine-dining destinations, and its relocation to that stretch of Howell Mill Road helped put the surrounding neighborhood on the map. In 2017, Bacchanalia moved again, about a mile away, leaving the iconic Westside Provisions District space—now surrounded by a flock of high-end restaurants—in need of its next occupant. Fittingly, Zeb Stevenson is moving in.

Stevenson most recently served as chef at Watershed, which, like Bacchanalia, is a grande dame of elevated, Southern-inspired restaurants. Stevenson left the restaurant when Ross Jones, one of Watershed’s owners, sold it to a new chef-owner (who, it’s worth noting, introduced a $350 French fry plate). Now Stevenson and Jones are joining forces again to bring a “free-spirited,” vegetable-forward restaurant called Redbird to Bacchanalia’s former home, set to open on August 5.

“Ross was my boss at Watershed. We like different things and have different personalities, but there’s such a bond of love between us,” Stevenson says. “We work really well together and complement each other in astonishing ways.”

The duo have hired chef de cuisine Christian Perez (of White Oak Kitchen and City Pharmacy) and bar manager David Spielberg (of Charleston’s Little Jack Tavern) to help implement their vision for an “approachable, come-as-you-are” restaurant. Unlike Watershed, which was focused on the South, Redbird’s menu isn’t reflective of a region. Instead, Stevenson plans to highlight simplicity with items like roasted almonds in brown butter crumble, charred leeks with olive oil and coffee vinegar, and rice croquettes with summer truffle. Koji duck breast, slow-roasted chicken thighs, and pan-roasted striped bass are also on the menu, with sauces such as shrimp ketchup, sweet onion hollandaise, and toum (a Lebanese garlic sauce) available on the side.

We asked him what else Redbird is all about.

What is “free-spirited cooking”?
[In most restaurants, chefs] build a dish by taking a piece of meat and building ingredients around it. I want to reverse that process and base the dishes around what’s growing. If protein finds its way into the dish, that’s okay. But being part of the vegetable-forward movement is about realigning how we build dishes.

Where do you get your inspiration for the menu?
I really believe there is beauty in simplicity. I’m seeking dishes with three components on the plate as opposed to 10. I’m always inspired by St. John [restaurant] in London. That’s the height of elegance—a very earnest, stunning style of cooking. Bo Bech’s work at Geist in Copenhagen—that’s more fine dining than us—but he puts two things on a plate and it’s brilliant.

An example is Spanish garlic shrimp. It’s shrimp cooked in garlic, chili, olive oil, white wine, and lemon, served bubbling hot with bread. It’s about getting the timing and temperature exactly right so that it’s bubbling when it’s brought to the table.

What will we see on Redbird’s menu?
We’ll have cold dishes and snacks like liver mousse. There’s a green salad and more composed vegetable-based dishes like crispy eggplant, potatoes, and grilled squashes. Then there’s a la carte proteins like market fish, and [different] sauces and condiments.

What about lunch and brunch?
The menus are set up similarly, but there are some must-haves that don’t quite fit in. I made a crucial error when I took over the kitchen at Watershed: I took pancakes off the brunch menu. Not a single brunch service went by without someone complaining about the lack of pancakes. So I insisted that we have pancakes at Redbird.

Lunch offerings include grilled cheese and tomato soup, blackened redfish, grilled okra with buttermilk and crispy shallots, and a kale salad. For brunch, there will be “restoratives” like carrot juice with kombucha, and desserts such as a fig, brandy, and cajeta tart.

How often will the menu change?
The menu is not changing daily. We’re really focusing on well-conceived, perfected, consistent dishes. In my past, I’d put dishes on the menu spontaneously, but they weren’t really the best dish. The Redbird menu will change more frequently than quarterly. Some preparations will always remain; they will just feature a different ingredient. With strawberries in season now, I’m using it in mustard, served with chicken liver pate and a dark rye bread.

How will the beverage program fit into Redbird’s “free-spirited” theme?
Wine is the driver. We are wine lovers. We’re using family-owned wineries and smaller producers. The producers may be unknown, but the varietals are approachable. The wine leans a little more Old World. I’ve been into Spanish wines recently, some French, and some domestic. We’ll have a half bottle program and probably 10 to 12 by the glass for white and red.

The beer list is compact: eight bottles and cans. I have some local favorites, but they won’t all be local. Cocktails will be simple and well-sourced.

How has the space been changed from its Bacchanalia days?
It was a big, empty box when we received it. The walls and partitions had been removed. We actually made the windows bigger. It has a lot of natural light. I can see everything in the restaurant. The kitchen line is completely open to the point where it is a little uncomfortable.

We wanted it to have a very low-key, chill, L.A. vibe. There’s warm wood columns, a fluted cinderblock on the kitchen pass, and smoky pendant lights that cut the room in half, but other than that, there’s not much decoration.

How do you feel taking over such a renowned space?
I’m scared shitless. It’s intimidating. It was a bold maneuver. All I can do is stay focused and be the best version of me that I can, and be a good boss, leader, and teacher, and empower the people who work there to help me carry the vision forward.

We had very clear parameters about the space we wanted. We wanted to be able to see people as they walk in the front door. The space is the right size. It has 90 seats inside and 34 on the patio. Watershed seated 140 inside. We wanted something a little more intimate. Plus, it has all this good juju.

I haven’t worked in the kitchen in over a year and I’ve really missed it. I miss being able to feed the people of the city. 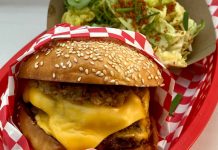 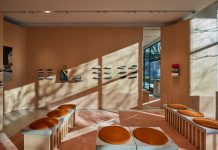