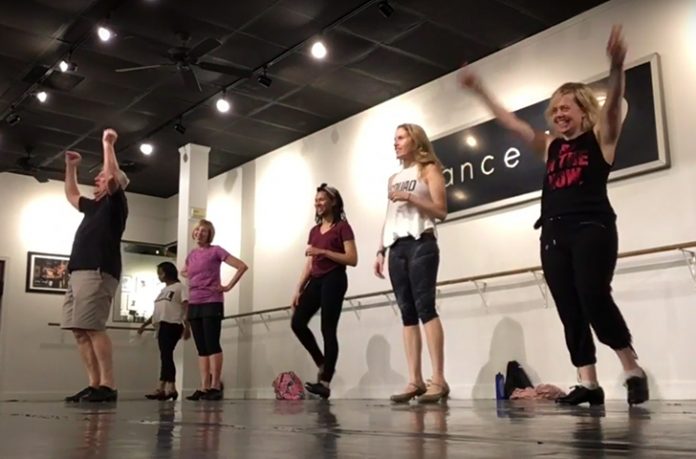 Barry Thomas remembers a particularly strict tap dance teacher who always told him, “If you can’t say it, you can’t do it.” And though at the time he’d mentally flipped her off, it’s now become one of his mantras as a dance instructor at Dance 101 on Briarcliff Road.

I recently checked out his Tap Basics class, and assumed that because I remembered how to do the Time Step from my starring role in the musical Anything Goes in high school, I’d be fine. But then he rattled off a bunch of words—brush, draw, flap, pullback, scuff, shuffle, slap, spank, stamp—that to me sounded like a big mish-mosh, and it became clear: I couldn’t say it, so I was probably doomed.

Thomas, after all, had been in A Chorus Line. On Broadway. He could ball change like nobody’s business. And I was wearing borrowed tap shoes, a size too big.

I brought along my friend Ashley, who’d been a dancer as a kid and in college. Little did I know just how strong her tap game was—at one point in her past, she’d been able to do the tap intro from Paula Abdul’s Straight Up video, which filled me with awe.

Thomas took us through a series of basic steps to warm up, then ran through more complicated moves, like the heel-toe series called a “paradiddle.” I recognized the term, because it’s a rhythm I’d learned in drum lessons, and in tap class it took me about 10 attempts to pull it off at a slower speed.

Because everyone else in the class had been before, they had many of the steps in their muscle memories. In my case, it took a lot of concentration and a physical focus that, in a surprise to me, got my heart rate up. Tap dancing, it turns out, can burn upwards of 250 calories per hour and help improve your balance. And the effort required to keep your body weight over your feet can work your core.

Next came some combinations, which I mostly bungled, though on the third try I did put together a series of flaps that ended correctly in a ball-change. I raised my arms in celebration, and Thomas snarked, “She did it! And it only took 30 minutes into class!” But I didn’t mentally flip him off. I just kept moving, sometimes with something close to grace—especially once we hit those Time Steps—but mostly with gangly imprecision, like Monica from Friends, and wore myself out.