Home Media What does Facebook Graph say about Atlanta stereotypes? 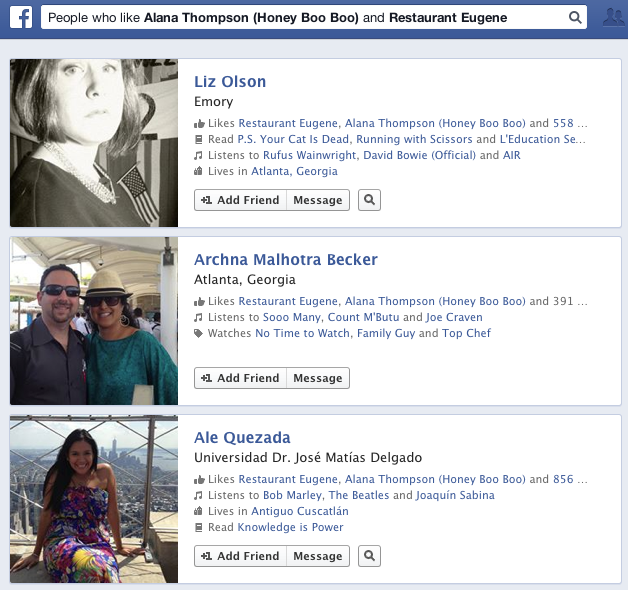 Facebook rolled out Graph Search to the public last Monday. For those unfamiliar with the search tool, this is kind of like Big Brother—if your brother really cared about how often you watch The Walking Dead or wanted to razz you about listening to Zac Brown. You’ve probably already noticed the new search bar at the top of Facebook.

How it works: If your profile is public or you’ve done anything on the platform publicly, then it will show up in these searches. So if you’ve liked CeeLo Green, and your profile isn’t on lockdown, then anyone can find out simply by typing “People who like CeeLo Green” into the search bar. They can then narrow those results down by gender, location, employment, relationship status, etc. Pro: You can easily find a lot of info about yourself, your friends, and everyone else. Con: So can everyone else. Here’s FB’s more positive spin. But however you wrap your mind around it, Graph Search can get somewhat creepy, so it might be time to adjust your privacy settings…

However, until everyone gets wise to the changes, I figured I’d do a little snooping about the denizens of our fair city, and possibly confirm or deny a few long-held stereotypes. It should go without saying, but this data is irrefutably scientific.

Atlantans who have worked at Coca-Cola, Delta, and Home Depot: 2

Atlantans who like skinny jeans and PBR: 4
See, we aren’t a hipster city! Slash, no true hipster would ever publicly like either of those things. But still.

Atlantans who like guns and computers: 8
So much for the theory that we’re a great cross-section of rednecks and nerds?

Just imagine the rich statistics we could glean from Facebook if only its data were more accurate and precise. Until then, I suppose the hipster question remains unanswered, and its utility as a dating site remains limited. Dare to dream.