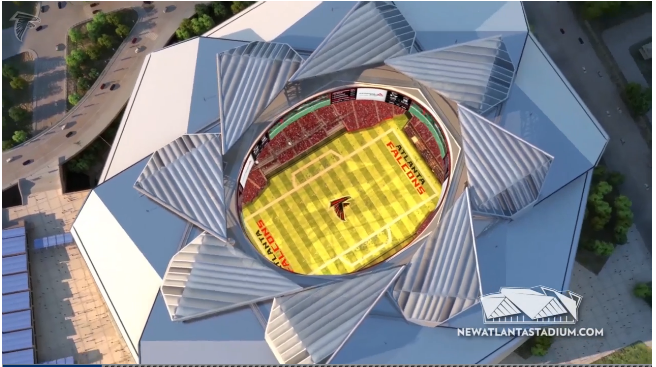 The Falcons recently released a virtual flyover of the new stadium that looks like it must’ve cost at least as much as one of the planned PSLs. (And just in case they can’t sell a PSL, there’s a 15-second ad preceding the video.) The  3-minute, 30-second 3-D tour will leave you wowed and a bit dizzy. To spare you whiplash or repeated viewing, we broke down the highlights:

0:30—Cue the music that is vaguely reminiscent of Hans Zimmer’s Dark Knight Trilogy score as we swoop over downtown Atlanta. We enter a holding pattern, circling above the new stadium as the flower-petal roof blossoms before us, revealing the playing field below.

0:49—Still circling, the anticipation of a virtual parachute onto the 50-yard line building…

1:00—…but, sadly, no. Suddenly we’re at ground level, entering the stadium like all the other suckers—through swinging glass doors.

1:16—We start to get the (spinning) view from different sections, and the closer you are to the field, the more you can already tell that the HD halo board is really going to hurt your neck. (Note: According to the scoreboard, this video is set during the Falcons’ Week 3 drubbing of the lowly Buccaneers—otherwise known as the last time any reasonable fan felt optimistic about the team.)

1:33—The spinning finally stops. If you need a rest or refreshment, we’re now on a walkthrough of the lounges.

2:15—Dude don’t look, but there’s a cute woman in a pink skirt standing alone at the corner of the bar near the 45-yardline of the 100-Yard Bar? You should go talk to her.

2:37—From inside, the windows offer an incredible view of the city skyline at night.

2:42—Stop by the gift shop to pick up the latest   merch, including unused 2014 NFC South Championship tee shirts and caps.

2:47—We get snapshots of the stadium set up for other events: A concert, Major League Soccer, and the Final Four (We know why they keep holding basketball games in these stadiums ($), we just don’t know why anyone would buy a ticket to essentially watch the game on the jumbotron with no booze.)

3:02—Finally back to superhero mode as we chopper out through the open roof.