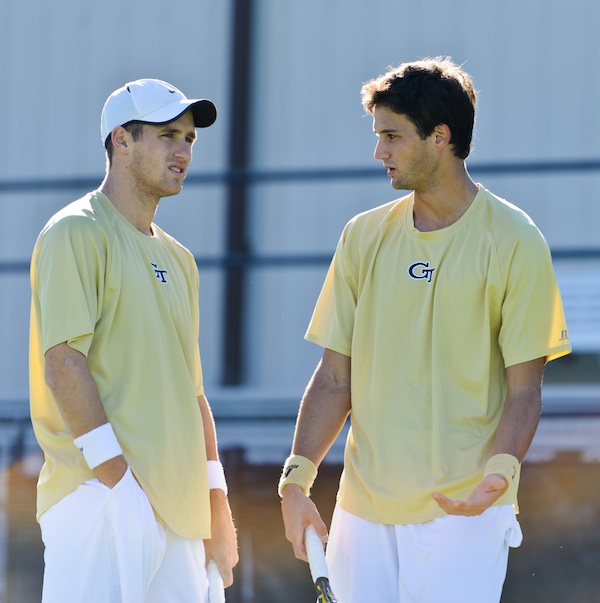 The U.S. Open Series kicked off this week in Atlanta, and luckily for us, some of the players are local. Doubles duo Kevin King and Juan Spir, former ITA All-Americans for the Yellow Jackets, are on the hunt for their first professional title together. The pair, ranked as high as number-two in the country during the 2011-12 season, will play their first-round doubles match tomorrow.

King, twenty-two, grew up in Peachtree City. He graduated with highest honors in mechanical engineering from Georgia Tech this past fall, where he also finished his singles career with eighty wins—ranked as high as seven nationally his senior year. King won his third-round qualifying match over Robby Ginepri on Monday to advance to the main draw of the Open. This is the first time he’s qualified for a major tournament.

After dropping the first set of his match against Ginepri, King came back after a rain delay with the momentum on his side. In the third set, he started getting crafty with his playing style—he even did a split mid-set. “I don’t remember that,” he said when I caught up with him. “Did I win the point?”

“It was definitely a tough match,” said King. “Robby’s a really good player. But it was nice playing in front of the home crowd, being able to do well here in Atlanta.”

Spir, twenty-three, hails from Medellin, Colombia, and at Georgia Tech, he finished his career with a record-breaking 103 doubles wins in four years. After playing in Monday night’s “Bro Down Showdown,” a mini-tournament comprised of sibling teams (in which the pair filled in for the Bryan brothers), Spir said: “It was just great to get out there and represent Georgia Tech, you know? Although me and Kevin are not brothers, like real brothers from blood, we definitely have shared a lot of things together in school.”

After the Atlanta Open, the doubles team will head to Colombia for the next three months and play in three or four tournaments there. King and Spir will return to Atlanta and play in several tournaments this fall, too. “It’s hard to schedule ahead of time, so we’ll just have to see the tournaments that start coming out and just go from there,” said Spir.

Spir lost in a qualifying singles match, and King lost to the five seed, Yen-Hsun Lu, 6-3 7-5 in a battle yesterday. But you can expect to see the doubles team focused and ready to go as they square off tomorrow against the fourth-seeded Edouard Roger-Vasselin and Igor Sijsling for a place in the quarterfinals.