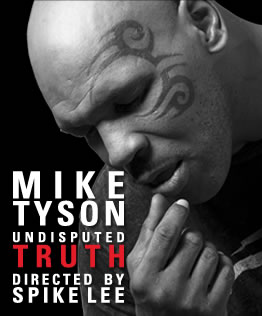 On Tuesday, taking a break from staging yet another warmed over musical based on a 1980s popcorn flick, the Fox Theatre announced a booking that will finally rival 2011’s Charlie Sheen‘s “Violent Torpedo of Truth” tour in terms of sheer hot messiness. On April 20 at 8 p.m, the Fox (presumably) proudly presents convicted rapist, “The Hangover” punchline and former heavyweight champ Mike Tyson starring in his one-man show “Mike Tyson: The Undisputed Truth” live on stage at the Atlanta landmark.

Yes, this is the same venue that booked Elvis Presley for a two-day stint where he performed in the venue three times daily in 1956. Blessedly, Tyson is only booked for one show. Still, we’re not exactly sure this is why community activists rallied in 1974 to mount the “Save the Fox” campaign when Southern Bell wanted to bulldoze the iconic property to build a skyscraper on the pricey Peachtree Street real estate.

Even better, esteemed filmmaker, Tyler Perry critic and Morehouse graduate Spike Lee is directing the boxer in the theatrical outing. According to media information sent to Eldredge ATL HQ on Tuesday, the show, with a script written by the face-inked thespian’s third wife Kiki Tyson, promises “a rare, personal look inside the life and mind of one of the most feared men ever to wear the heavyweight crown. . .a riveting one-man show that goes beyond the headlines, behind the scenes and between the lines to deliver a must-see theatrical knockout.”

The 36-city tour, 10-week national tour of the show kicks off this month in Indianapolis. After serving three years of a six-year sentence for the 1992 rape of 18-year-old Desiree Washington, boxing fans around the world will recall Tyson’s signature brand of atonement — when he removed a piece of Atlanta heavyweight champ Evander Holyfield‘s right ear with his teeth before being disqualified during the pair’s 1997 rematch.

On Wednesday morning, it could not immediately be confirmed that the Fox Theatre finale of “Mike Tyson: Undisputed Truth” will feature an on-stage reunion with fellow multi-millionaire boxer/bankruptcy filer Holyfield in a money management counseling session with personal financial guru Suzy Orman.