Home News & Opinion Arts & Events Stomp and Stammer’s Jeff Clark may be the most hated man in... 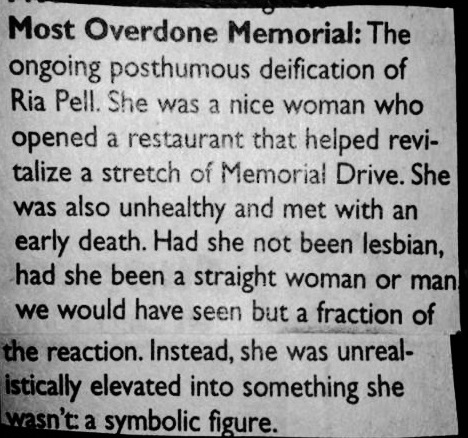 On a day with a -5 wind chill, the temperature throughout the city managed to plunge even further south on Tuesday once Atlantans got a look at the January issue of Stomp and Stammer magazine. The 17-year-old monthly ‘zine published and edited by veteran Atlanta writer Jeff Clark, is a self-described hodgepodge of “news, music, noise, opinion and garbage.” Across Facebook, Twitter, Instagram and Tumblr posts, friends, family and fans of Atlanta chef and restaurant owner Ria Pell are using the latter term to describe Clark’s 2013 In Review wrap up in the new issue.

The columnist categorized the larger-than-life Ria’s Bluebird café owner’s Nov 30 home-going as the year’s “Most Overdone Memorial.” He went on to write: “The ongoing posthumous deification of Ria Pell. She was a nice woman who opened a restaurant that helped revitalize a stretch of Memorial Drive. She was also unhealthy and met with an early death. Had she not been a lesbian, had she been a straight woman or man we would have seen a fraction of the reaction. Instead, she was unrealistically elevated into something she wasn’t: a symbolic figure.” After a Pell fan snapped an Instagram image of the paragraph and posted it, the more than 5,500 fans of the chef’s Remembering Ria Facebook page mobilized. Since Pell’s death, friends and fans of the chef have used the page to post new bluebird tattoos they’ve gotten in honor of Pell and to spread the word about a Krog Street tunnel graffiti community project in Pell’s memory.

After Pell fan Arturo Rodriguez shared the paragraph on Facebook, Pell’s supporters began speaking out. Posted Jenny Williams: “Stunningly homophobic douchebaggery on bold display here, Stomp and Stammer.” On her Twitter account, Atlanta DJ/mixtape artist Speakerfoxx tweeted: “@stompandstammer Jeff Clark may have singlehandedly destroyed your business. Mocking the death of Ria & her loved ones is an all time low.”

Overnight, Star Community Bar mainstay and Pell pal Tom Jersawitz created the Facebook group Boycott Stomp And Stammer And All Who Advertise There. By daylight Wednesday, the page had 684 members. The Remembering Ria Facebook page, meanwhile, posted a note with all of Stomp & Stammer’s advertisers and their phone numbers, along with the message: “He has every right to say what he wants. But you have the right to let his advertisers know how you feel about him as well.”

An administrator for the Drunken Unicorn nightclub Facebook page posted this below the note: “The Drunken Unicorn has decided to pull our monthly ad. . .Stomp and Stammer has printed opinions that we have not agreed with over the years and we have respected the writers’ rights to their opinions. However, we think what was written about Ria is not appropriate in any context and we are right in pulling our advertising for such malicious language.” Responding to listener Libsy Smith, a rep for WMLB AM 1690 The Voice of the Arts where Clark hosts the weekly Stomp and Stammer Radio Hour wrote: “We’ll make an official announcement [Wednesday] that will hopefully be satisfactory to everyone. On a side note, we were all big fans and supporters of Ria and understand completely that she was a wonderful spirit, chef, friend and mentor to a lot of people in Atlanta. We do not at all condone what Jeff wrote in his magazine.”

In case you’re unfamiliar with Clark’s work, he has steadfastly covered Atlanta’s music scene for more than 25 years and first developed a readership as a music critic for Creative Loafing. Over the years, Clark’s unvarnished critiques have earned him both respect and the occasional punch in the face. An unflattering Clark review also inspired “Stomp and Stammer,” a song written by now-defunct Atlanta rock act Attractive Eighties Women. While lyrics to 98 percent of the song cannot be reprinted here, here’s a tiny lyrical sampling: “Jeff Clark is a **head. He’s an **hole. He’s a **damn son of a bitch. He don’t like our band. And guess what? We don’t like HIM!”

As of this posting, Clark hadn’t responded to an Atlanta magazine request for comment. But longtime Atlanta critic and Stomp and Stammer Caught on Film columnist David T. Lindsay is defending Clark’s right to publish his opinion. Wrote Lindsay in a post on Clark’s Facebook page: “There you go again, giving an opposing opinion (I knew Ria and loved her). Now the intolerant ***holes want you to pay to play! Funny thing is, Ria would have probably agreed with you and she’d certainly have agreed with your right to voice an opinion.”

Longtime Slim Chance and the Convicts singer James Kelly (who is also a clinical psychologist) attempted to put the controversy into perspective on Clark’s Facebook page: “I knew Ria from the old days at the Point [rock club in Little Five Points]. Her sexual orientation was never a point of discussion, never used as any type of affirmative action point. The reason she was so admired and so profoundly grieved by so many people was because she was a wonderful human being and an incredible community activist. What Jeff said was completely wrong. I, too, defend his right to print whatever he wants in his own magazine, however, he needs to be willing to accept the consequences for what he says, especially when it’s false. In this case, he was simply wrong.”