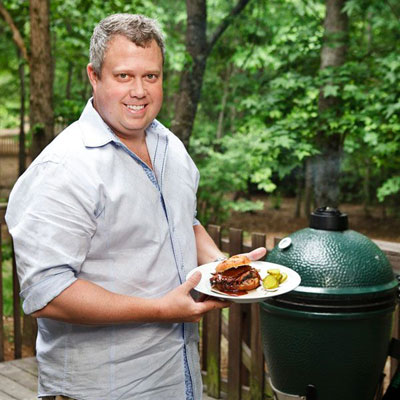 Dinners at the suburban home of Ford Fry, chef-owner of JCT Kitchen and No. 246, typically revolve around the Big Green Egg perched on the spacious deck in back. What emerges from the ceramic smoker takes him back to gatherings he attended as a youth at his grandfather’s ranch outside of Houston. While he and his cousins rode motorcycles or shot skeet, the men congregated around the Old Smokey charcoal grill, slathering slabs of meat with a sauce made from a ketchup-based recipe passed around and reinterpreted from one uncle to the next.

The classically trained Fry takes his own liberties with traditional recipes when cooking at home. He rubs his brisket with a Texas-style seasoning blend and smokes it for more than half a day to rosy-ringed tenderness, then slices the meat thinly against the grain. He pairs the meat with a sauce flecked with bacon and onion and heavy with brown sugar, yellow mustard, and Worcestershire—flavors remarkably similar to those in his mom’s signature baked beans. He also throws in lots of freshly cracked black pepper and a generous glug of Shiner Bock, his home state brew of choice.

A distinguishing element to Fry’s brisket sandwich is the jalapeño-cheddar fry bread. Rather than store-bought white, he piles the meat and sauce onto airy homemade buns spiked with sharp cheddar and jalapeño that he created as homage to a favorite Texas barbecue joint. “Whenever I go back home, I always eat at Goode Company Texas Bar-B-Q,” Ford says. “My family and I used to go there nearly every Sunday after church. [The original Houston location] is a small, run-down building with long picnic tables that plays old country music. They serve their barbecue with jalapeño-cheese bread that they bake in loaves and cut in Texas toast–size slices.” In his version, though, he can’t resist pulling out a few professional chef’s tricks. “I use a brioche dough instead and deep-fry it, like Indian fry bread.”

Instructions
1. Prepare the rub: In a small bowl, combine dry rub ingredients. Store in a jar until ready to use. (Makes about 1 ½ cups.)

2. Season the brisket generously all over with the dry rub. Wrap in plastic and refrigerate overnight. Smoke over pecan wood according to the manufacturer’s instructions for your smoker.

3. Prepare the sauce: In a heavy-bottomed saucepan over medium-low heat, slowly render the bacon until slightly crisp. Add the minced onion and cook over medium until golden and tender. Add remaining ingredients and simmer for 30 to 40 minutes or until desired thickness; taste and adjust seasonings as desired. (Makes 1 quart.)

4. Serve doused with Texas  Barbecue Sauce alongside Texas toast, on a bun, or stuffed inside Jalapeño-Cheddar Fry Bread.

This is an extended version of the recipe that originally appeared in our August 2011 issue.