Cold Beer, Kevin Gillespie’s new BeltLine-adjacent restaurant in the shadow of the Edgewood Avenue bridge, isn’t any more about cold beer than Gunshow or Revival—his other high-profile restaurants—are about firearms or religion. Gillespie, who was born in Henry County, an hour south of Atlanta, is working on an emotional oeuvre about his roots.

Despite, or maybe because of, a cancer battle last year that cost him a kidney, Gillespie is more willing than ever to double down on innovation. Cold Beer makes a powerful statement about the BeltLine and its maturation: More than a place for casual noshing, our all-important ribbon of concrete has come of age with a restaurant that (almost) captures its ambition.

Not everyone turns down a scholarship from MIT to study cooking, but Gillespie’s instinct was right: His calling was elsewhere. Ten years ago, when he was chef at Woodfire Grill, he competed in season six of Top Chef. He became a finalist, was named Fan Favorite (as much for his intelligence and charisma as his culinary prowess), and has been one of Atlanta’s splashiest, most experimental culinarians ever since.

Once a competition chef, always a competition chef: Gillespie is constantly pushing the envelope, as if trying to impress judges with a dazzling array of as many skills as possible. His drive to differentiate himself from the fray is both his greatest strength and his vulnerability. At Cold Beer, he and chef Brian Baxter, a veteran of Husk and Bastion in Nashville, have the same impulses: Explode and recreate dishes with no undue reverence for classic ingredients. Beverage director Mercedes O’Brien, Gunshow’s former cocktail maven, pushes as hard as her boss to make a statement. Service at the restaurant is much friendlier than at comparable hipster spots and much more capable of supplying adequate explanations of a slew of ingredients unfamiliar to the average diner.

After an early period at Cold Beer when every small plate felt too much like stunt food designed to stimulate the intellect rather than the taste buds, Gillespie’s creations are starting to relax. The thick cover of flowers and herbs blanketing a shrimp pancake now looks less like a floral centerpiece and more like something you’d like to eat. The lamb ribs no longer hide under an overwhelming layer of cashew yogurt and instead are presented as a fetching little rack of Kentucky-style barbecue, plunked sauce and all onto a thin slice of housemade white bread.

There is much to admire at Cold Beer. A cross-cultural dish of fried okra is pungent with hot-and-numbing Sichuan peppercorns and mellowed by a smooth labneh blackened with eggplant powder. The aged beef steak tartare, mixed tableside with a plethora of microdiced, pickled, and fermented ingredients, as well as Russian dressing with a pineapple-ketchup base, becomes a kind of Reuben sandwich–flavored quenelle, with thick planks of potatoes fried in beef fat serving as bread.

But the food often can be overwrought. A thick slice of beef belly, blanketed with watermelon hoisin sauce and served with little gem lettuces, fried shallots, and crushed peanuts, and the popular but weirdly bland smoked and fried chicken wings don’t even amount to elevated bar food. The desserts—ranging from an unexpectedly dull, overbaked pavlova with mulled wine and fig-leaf anglaise to a stale funnel cake with equally unpleasant toasted hay cream and hyssop ice cream—are good in theory and letdowns on the table.

O’Brien’s talent behind the bar is undeniable, but some of her ideas work better than others. Why make your own (acrid-tasting) Chartreuse? Why add avocado to the frozen margarita when it serves only to make it weirdly thick and less refreshing? On the other hand, the Eastern Trinidad Sour with fermented cashew and sour mango is an unusual little jewel. And a multilayered ice cube composed of frozen melon and mezcal that graces an herbal cocktail redolent of Alpine spirits and elderflower is great fun. One can always seek the restaurant’s namesake refuge in its excellent German beers, including the Helles Vollbier from Mahrs Bräu. Also, $2 will buy you a small beer while you wait, a practice more restaurants should embrace.

Prestigious local firm Ai3 did a bang-up job with the sleek architectural interior (for the ambitious eaters), its relaxed patio (for the people-watchers), and its vibrant rooftop (for the partiers). In the dining room, a photo of chef Gillespie’s torso that shows his tattooed arm but not his head symbolizes, according to him, the lack of ego to which he aspires, while a giant oil painting of a standing polar bear lords over the scene.

The philosophy of the restaurant is, in Gillespie’s words: “Just because something hasn’t worked yet doesn’t mean we aren’t supposed to do it.” In practice, such an approach demands a lot from diners who may have expected more straightforward pleasure. Yes, you likely will experience flavor combinations in the dishes and the cocktails that feel new, and, yes, most of them will delight rather than confound. But not all of them. Cold Beer is a restaurant that deserves your support—as long as you’re willing to be patient while it pursues its aspirations.

Palette of Arabia Mountain
You had us at “Arabia Mountain,” but white whiskey, spruce, juniper ice, and lacto blueberry dust are pretty convincing, too.

Tropical Grains
A rye drink that includes not just koji pineapple and barley almond orgeat but a rye crisp with pineapple butter? Into it. 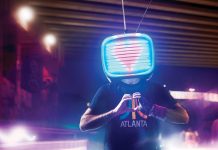 Who is that guy on the BeltLine with a TV on his head?