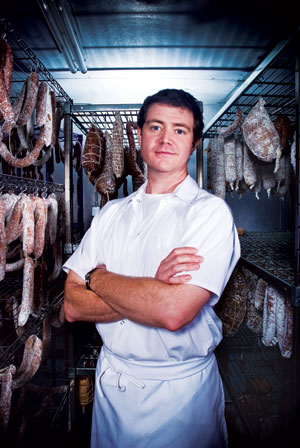 I don’t wear a hairnet for just anybody. But when Rusty Bowers, the baby-blue-eyed young owner of Pine Street Market, handed me a white coat and something even more hideous than a shower cap, I suited up without a whimper in order to follow him into the back room where he turns hogs into artisanal sausages. We had just met: him behind the counter; me in front, eyeing the samples fanned out on a carving board in the small store he operates with the help of his wife and a part-time worker named Jose, who is a whiz with the knife.

Bowers calls what he does salumi (not to be confused with salami, which is one specific style of sausage), and I call it charcuterie. Atlanta’s newest full-time producer of cured meats was far into his twenties when he had his first meaningful encounter with Italian sopressata. After graduating from the Culinary Institute of America in Hyde Park and working as a sous chef at Pano’s & Paul’s, he found his calling.

You don’t need a quarter of a million dollars to start making salami, as one consultant told Bowers, but you do need a lot of refrigeration equipment, several fans, a cold humidifier, a combination grinder and mixer, a smoker, and several gizmos, including something that looks like a cheap gadget but costs $2,000 and measures the “water activity” (professional speak) within a drying sausage. You had also better be prepared for daily visits from a USDA inspector who will look at your drains and take temperature readings in your coolers.

I have become an enthusiastic consumer of the product I buy at Pine Street Market. My favorites are the coppa (a dry-cured whole pork collar spiced with chiles and black pepper), the spicy Hungarian-style paprika salami, and the tiny picnic salami whose fine grind and kaleidoscopic structure I especially like.
Now that I have spent some time with Bowers, standing on the sealed gray concrete floor in the rear of what used to be an upholstery shop, I know a lot more about what makes a great salami. Bowers’s process starts with fresh hams and shoulders from slightly older pigs (“better flavor,” he told me) brought in from a farm near Raleigh, North Carolina. The fat is harvested first. Butchering is next, followed by grinding, salting, spicing, adding a German yeast culture, and stuffing into all-natural casings, aka pig guts. Careful aging and drying transforms a simple sausage into an inspiring salami. The magic happens in a walk-in cooler where fennel-scented finocchiona, robust peperone (whose spicy nuances could never be confused with vulgar commercial pepperoni), and traditional pancetta rolled by hand all dangle from metal racks. The tangy odor and fine white mold that accrue on the surface of the more mature specimens gave me the same frisson as being in a cave where cheeses ripen to perfection.

My only criticism of Bowers is that his salumi tends to be a little soft—in Europe, you should be able to clobber someone with the salami you take home in butcher’s paper. What you buy at Pine Street Market will last up to six months uncut in your refrigerator (longer for the sliced, stacked, and vacu-packed applewood-smoked bacon), but why would you want to wait that long to enjoy it?

For those who live far from the Avondale Estates neighborhood where his shop resides, Bowers sells his line of products under the name Cured Foods at the Peachtree Road Farmers Market in the Cathedral of St. Philip parking lot, and restaurants such as La Tavola and Ecco are starting to use it on their charcuterie platters. One can also order online and receive a shipment anywhere in the United States. At $13 a pound, a salami perfumed with toasted fennel, Pinot Noir, or even truffle is a bargain and a sexy masterpiece crafted by the hands of a local artist/artisan. 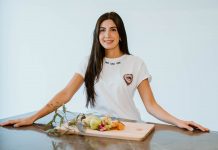