Donetto
West Midtown needs more destination restaurants, and Donetto—part of Steve Palmer’s Indigo Road Hospitality Group (Oak Steakhouse, Colletta, O-Ku Sushi)—brings Tuscan food to a glam dining room directly across from Miller Union. Giant cuts of meat, a strength for a company known for solid if not particularly innovative food and great service, combine with accomplished mixology in a huge former industrial space with an open kitchen and a sexy bar. Partner and executive chef Michael Perez’s appetizers are lively; try the grilled aged Provolone or the squiggly frittelle mixed with prosciutto and biting-sharp Pecorino Romano, both more exciting than the sometimes undercooked pasta. For those who balk at gorging on a 36-ounce market-price hunk of beef with salsa verde (the signature steak Florentine), the crispy rabbit with three sauces is the way to go. 976 Brady Avenue, 404-445-6867

Muchacho
The name of this cafe in the former H. Harper Station might fool you; it’s not a Mexican restaurant. Yes, there are tiny handmade tortillas filled with eggs and chorizo or barbacoa. But the rest of the menu reads like a trend report of the past couple of years in food—grain bowls, poke, $7 avocado toast—and includes Counter Culture coffee drinks. No matter: The vintage SoCal vibe has kept this place packed since October. Owner Michael Lennox hired Taria Camerino, a gifted pastry chef, as culinary director of both Muchacho and Golden Eagle, a kitschy retro “diner’s club” in the rear of the building. 904 Memorial Drive SE, 404-748-9254

Janet’s Kitchen Atlanta
Filipino cuisine gains a stronger foothold in Atlanta with the opening of an informal restaurant that owner Nycole Sanders named in honor of her late mother. Side dishes are of the Southern variety—collard greens, black-eyed peas, candied yams—but many of Janet’s menu items are typical of the Philippines. (Sanders’s husband, Lester Francisco, is from Manila.) There’s pork adobo stewed in the classic soy and vinegar sauce; pleasurably sour chicken sisig; shrimp and pork lumpia, which are similar to egg rolls; and, sometimes, shrimp inasal, or shrimp roasted in a mixture of soy sauce, vinegar, garlic, and annatto seeds and served skewered. Don’t let the bareness of the room keep you from enjoying your food; casual is what it’s all about here, and most customers order to-go. 1359 Clairmont Road, Decatur, 404-549-7808 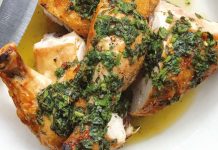 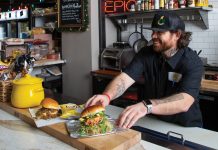