Banshee
Pepperoni butter, where have you been all our lives? Chef Nolan Wynn’s simple yet genius condiment, served with perfectly puffy-crunchy Native American fry bread, is somehow better than both pepperoni and butter. Even if you think pepperoni-tinged pizza grease is gross, you won’t be able to deny the power of pepperoni butter. Just weeks after Banshee opened, our server proudly boasted of countless customer requests for Wynn to sell jars, bottles, or vats of the stuff. Don’t hold your breath for that, but do get yourself to East Atlanta Village and witness the marvel yourself. You’ll be further awestruck by the convivial vibe of the small dining room, which brings to mind the mood of Manhattan’s East Village, and by cocktails such as the Stately Hag, a tart and herbaceous mix of reposado tequila, cocchi americano, Strega, lemon, and thyme. Whatever fish is on offer—in our case, snapper paired with wakame, farro, and sunflower sprouts, graced with a sublime soy beurre blanc—don’t skip it. 1271 Glenwood Avenue, 470-428-2034

Pho Nam
Brothers Alex and Chris Kinjo of MF Sushi fame are behind this Krog Street Market stall hawking Vietnamese standards. It might not be the best intown option for Vietnamese (that honor belongs to Anh’s Kitchen, in which Alex Kinjo played a consulting role), but it more than scratches the itch for quality pho, banh mi, or vermicelli bowls. Pho succeeds or fails on its broth, and the broth here strikes the right balance between leanness and earthiness—it’s light and fragrant but still holds up to a powerhouse combo of rare beef, brisket, and sliced meatball. Banh mi, likewise, succeeds or fails on its bread, and this baguette has enough integrity to safely cradle a beautiful mess of ham, pork roll, and perfectly pungent housemade paté, though the bread sometimes has a touch too much chewy tug. The shrimp in a vermicelli bowl was short on the char or flavor that’s required to punch up a dish that runs the risk of blandness; pork or steak is the better choice. 99 Krog Street, 404-748-1381

Root Baking Company
When wife and husband Nicole Lewis-Wilkins and Chris Wilkins relocated their artisanal bakery to Ponce City Market last fall, Charleston’s loss became Atlanta’s gain. Formerly a wholesale-only operation, Root now sells to the public, and lovers of its bread—made from Southern wheat milled on site—aren’t the only ones who line up at the swoon-worthy retail counter. You’ll find slim, pointy baguettes and shapely loaves crafted with Charleston rice and benne seeds, cranberries and pecans, grits, sorghum, or whole wheat. You’ll also find the most perfect buttery croissants and pains au chocolat, still warm from the oven. Chef Matt Palmerlee has crafted a lineup of exquisitely simple sandwiches (including roasted chicken with harissa carrots and, as the menu promises, “a lot of herbs”) and more intricate salads (such as one with seared squash, spiced lamb terrine, dark chocolate, nutritional yeast, and olive oil-whipped labneh, among other ingredients). Hang out here for any amount of time and you’ll realize that everything about Root, from the signature giant chocolate chip cookies to the airy room with its community tables, is designed to bring joy. 675 Ponce de Leon Avenue, 470-639-8046 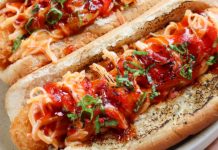 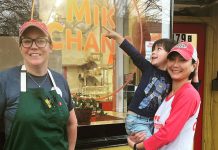