Home Uncategorized Turning 15, Irwin Street Market is as “quirky and funky” as ever

In the shadows of booming Ponce City and Krog Street Markets, it can be easy to overlook the funky little market that sits in a former refrigerator repair shop at the edge of Old Fourth Ward and Inman Park. But Irwin Street Market has been hugely influential as the starting ground for many local companies that have become household names—King of Pops, Bell Street Burritos, and O4W Pizza, just to name a few—and has held on to its scrappiness as the neighborhoods around it shift and evolve.

Jake Rothschild, owner of Jake’s Ice Cream and the master leaseholder of Irwin Street, takes a lot of pride in the incubator. “We’re very small and intimate, and everybody who’s coming in is doing something brand new,” he explains. “There’s something clearly very quirky and funky about the market. I think it’s a little bit more relatable because everything is very reasonably priced.”

When Rothschild opened the market in 2006, it was intended to be a place where up-and-coming brands could get their feet wet. They could rent kitchen access or become a vendor in the market. The first tenant, besides Jake’s Ice Cream, was Flower Bar. Owned by Amber Schoepp, the business briefly left but, upon its return, now has a space four times as big as the original.

When the pandemic began, Rothschild was ambivalent about what might happen with the market that relies so heavily on foot traffic, thanks to its proximity to the BeltLine Eastside Trail. But Glide Pizza opened a takeout window in July, followed by two new tenants, D.B.A Sandwich Company and Bottega Benne, and the market was rejuvenated.

Rob Birdsong, Glide’s owner, was set on opening a traditional pizza restaurant in Midtown until the pandemic made him reconsider. He used Irwin Street’s commissary to develop his pizza dough and decided to open his takeout-only pizza restaurant in the former O4W Pizza space.

Glide has thrived thanks to the takeout window and has already expanded three times to accommodate an increased volume of orders. “We’ve learned so much in the last six months that I feel this model really suits us. It suits the future of food,” Birdsong says. He says he feels unsure when restaurant dining will be back in full-swing, “so I like this walk-up window approach. I think it works extremely well for us and that it’s a really great location for us to be operating out of.”

Bottega Bene is the brainchild of Blaire Dorin, who previously worked in marketing and interior design. An Italian American, she had long been inspired by antipasti boards and decided to open a business selling them at the beginning of the year, taking over the back patio at Irwin Street. The space was pretty “bare bones” but that’s precisely what drew her to it. “I’m really inspired by rustic spaces that produce beautiful things,” says Dorin about the space that once housed Flower Bar. “I felt really strongly about keeping some rustic elements and honoring what the space was before.”

Bottega Bene sells meat by the pound and coffee beverages, but their antipasti boxes are the standouts. A box for two to four people might include mortadella, speck, burrata, and accompaniments like bread, marinated red pepper, and pistachios. She also sources locally when possible with products from Savannah Bee Company and Georgia Sourdough.

Even though Dorin is confident in her vision for Bottega Bene, she’s appreciated being in an incubator setting. “The support and network that comes with Jake and other tenants at Irwin Street is really great,” says Dorin. “This is my first time doing a food concept and it can be . . . pleasantly scary. The other tenants are willing to help however they can, and it’s been really nice throughout launching the business.”

In a city that’s quick to tear down historic buildings, or retrofit them with glass and steel, Irwin Street Market’s appearance is almost refreshing. There are scoffed floors. There could probably be more signage. But it’s also warm in a way that some new places just aren’t. “I mean the place isn’t stunning in every aspect,” says Rothschild. “There all kinds of things it needs. But you go in there and you feel like you’re home. You feel like you’re with your people.” 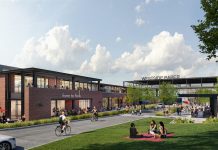