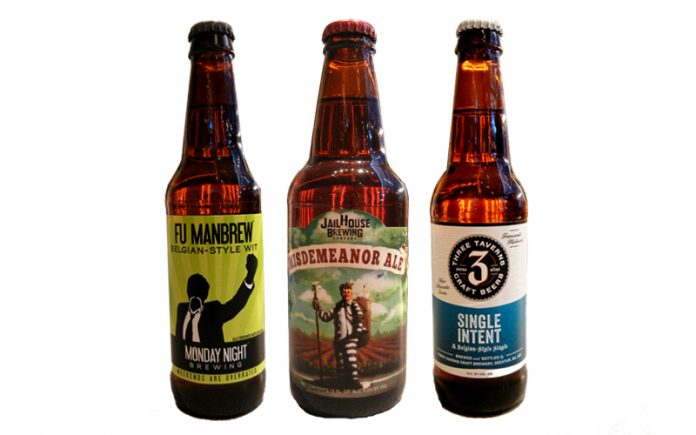 Somebody is always drinking something at Krog Street Market. Craft Izakaya was the first to sling cocktails for the market’s late night crowd. Now, Hop City Craft Beer & Wine is pouring 60-plus beers on tap throughout the day. Owner Kraig Torres says business has been going “gangbusters.”

“This has been ridiculous. On Saturday, there was a 30-minute line for beer. That’s not what we want—our goal is not to create a line for beer—but if I knew we were going to have 700 to 800 guests an evening, we probably would have designed this bar a little differently.”

The bar at Hop City isn’t the only place where you can expect a line. Fred’s Meat and Bread and Yalla, both by Todd Ginsberg of The General Muir, always have lines that seemingly stretch from both ends of the market. Grand Champion BBQ appears to sell out daily as well. Collectively, this stellar group makes for good eating and drinking, which brings me to the point of this series: Which beers make for the best food pairings? In this first installment, Torres, with the help of his bar manager, Trevor Jones, picked the best pours for dishes from Fred’s, Yalla, and Grand Champion.

“We were looking for something that would complement the grassy, acidic nature of the arugula but not step on the meat. I was looking for something with a pretty aggressive spice profile, but not necessarily anything heavy or dark. There’s Thai Basil in this beer. An IPA would be terrible. I could have gone with a Saison, too.” “Burgers and IPAs are as American as apple pie and baseball. You want to offset the grease with a nice backing of hops, but you can’t do too many bells and whistles because it’s a burger. It’s got a really earthy, bold hop profile. If you try the burger and then drink the beer, I get sweet cream, almost a Dolcetto-like finish. It’s amazing how the beer neutralizes the burger.”

“If you’re dealing with greasy food, you need hops. I like this because it’s a restrained beer and gives you a blanket of caramel up front but not in a sweet way. The beer tastes like a crackerjack, and it plays nicely with the grease.”

“This is a Pale Ale, but it’s a more English-style pale ale. Biscuity, restrained, well mannered—this beer went to finishing school and is wearing a tie. This pairing is genius. You get more potato, but don’t lose the barbecue and spice notes. The Ale almost tastes like a lager when you’re done with the fries.”

“I grew up in a traditional English household where when you served lamb, you put mint jelly on the side. Lamb has that gaminess and needs something like mint jelly to make it more interesting. The juniper berry in this beer acts like mint jelly. While this is an IPA, it’s not in your face. It’s super delicate and more floral and herbal as an IPA than it is citrusy.”

“A Belgian-style single is a style you rarely see imported because they’re low-gravity, and they don’t travel well. You get some of that Belgian-yeast character, but it’s super dry. The hop profile is super muted. The yeast character is really the predominant flavor here, and the pairing is perfect.”

“I’d like to pair two beers with this one. For the safe choice, the Weihenstephan is the answer. It’s a neutral palette, but you do get the cloviness out of the wheat, which is a spice, but it’s super mild and faint and not the kind of beer that would ever step on anything. The second choice is for the adventurous palette. It’s a ginger wheat. Either way, you want a wheat beer. We don’t want anything too bold or aggressive. Not a dissimilar yeast profile but with a distinct note of ginger.”

“That is spot on. The Red Hop Rye is the mullet of beers. It’s got all the malt, the business, in the front, but in the back it’s got the hops going wild and

crazy. The beer is really nice and spicy. You need the hops to cut through the fat.

“This brisket is moderately smoky. I love a smoky beer, and I also love a smoky brisket but if you go too far, it’s like smoking a cigar. The beer tastes smokier before you have the brisket, but it brings out those nice caramelized onion notes in the beer. It really accentuates the body of the beer. You get that big creamy mouthful.

“This is a classic style Porter, and here I’m doubling down and accentuating notes that are already in the food. I’m going for roasty on roasty. Now that I’ve had the beef, this porter tastes smokier. Without the ribs, this beer is unsweetened chocolate. With the ribs, it’s like you’re at a campfire. This might be my favorite pairing.”

My allegiance has always been to wine, not to say that I don’t appreciate a good brew or love a clever cocktail. But with these dishes, it’s hard to imagine a more perfect fit than beer. I may not crave an IPA on its own, but if I’m staring at a cheese steak that’s sopping in grease, an IPA is all I want. Torres takes it one, or two, steps further.

“Chris Reid, our general manager and the mastermind behind our wine, would completely disagree with me, but I insist that the range of flavors and taste that you can generate on beer is far superior to wine. Wine, at the end of the day, is grapes. Sure, you might use barrels for flavors, but we can add coriander, cocoa nibs. Really, the imagination is the only thing holding a brewer back. We’re not limited to one ingredient,” Torres says.

The beers on tap are prone to changing throughout the week, so go now if you’re set on a particular pairing. If the pairing is gone by the time you get your food, just ask the barman for help. After watching them work, I’ve got no doubt they’ll find you a winning substitute.