Shaun Doty is back in the kitchen again, and the only question you might have after dining at the Federal is, “What took so long?” We’re all the beneficiaries of the time he spent coming up with surefire moneymakers Yeah Burger and Bantam and Biddy, but opening the Federal last November has been his greatest gift yet—to Atlanta and, perhaps, to himself.

Although Doty was born in Oklahoma, Belgium is where he discovered the cooking style that suited him. After a year of bouncing around kitchens in Brussels and traveling around France, he had found his food: fine but not fussy bistro cuisine, simple and delicious. Charcuterie, wine, steak frites, salade vinaigrette.

In the States, Doty worked as sous chef for former Atlanta fine-dining king Günter Seeger at the Dining Room at the Ritz-Carlton. He later became executive chef at downtown hotspot Mumbo Jumbo before opening MidCity Cuisine, a brasserie like the ones he loved in Europe, in 2003.

MidCity Cuisine was recognized as one of America’s best restaurants by Gourmet, and this magazine named it restaurant of the year in 2004. “Chic but without attitude, curious about everything, and experimental within reason, MidCity Cuisine is an all-around winner,” wrote Christiane Lauterbach, Atlanta magazine’s dining critic at the time. Still, MidCity filed for bankruptcy three and a half years after opening—just after Doty had left for a brief stint at the High Museum’s modern Table 1280—a reminder of the restaurant industry’s ruthlessness.

Doty moved forward. In 2006 he opened Shaun’s, which became a beloved Inman Park bistro. Smaller than MidCity with just 65 seats, this was Doty’s perfect world: an intimate neighborhood restaurant with tables covered in butcher paper. Those Atlantans who loved rustic chicken liver pâté as much as Doty does ate there often until the restaurant closed in 2010. After the 2008 financial crisis, people just weren’t dining out like they used to.

But Doty landed on his feet with a move that most chefs, at least the ones who consider themselves artists, might never make: He dropped his ego. The fast-casual trend was, well, trending, and Doty decided to open Yeah Burger with former music exec Erik Maier, serving grass-fed beef burgers at approachable prices. Doty sold his shares in 2012 and opened another fast-casual concept, this time with a focus on all-natural, pastured chicken, called Bantam and Biddy. With the help of longtime friend and sometime business partner, restaurateur Lance Gummere, Doty grew Bantam and Biddy into a four-location chain with a catering arm and a sister space in Atlantic Station called Chick-a-Biddy.

Doty and Gummere decided to turn one of those Bantam and Biddy locations, the one on Crescent Street, into the Federal, a reference to the nearby Federal Reserve Bank. “The one thing that I feel like I have the most complete command over is running a kitchen,” says Doty.

The duo has created an elegant but relaxed dining room with slanted antique mirrors and orange leather banquettes. Like a classic French bistro, it’s open morning, noon, and night. (Unlike a classic French bistro, the breakfast menu includes some hearty Southernisms, such as chicken and waffles or steak and eggs. No complaints there.) And at dinner, he’s cooking the food that got him going in the first place.

Most impressive are the steaks, which Doty sources primarily from a ranch in Iowa, and the classic French sauces that he makes to go along with them. There’s the earthy sauce chasseur with mushrooms, the smooth and tangy béarnaise, and a peppery, creamy au poivre. In one preparation, the chef removes the intramuscular fat from grass-fed ribeye, supplements it with “Moo Gloo,” a meat glue loved by modernist cooks, and allows it to rest, all tied up, overnight. It’s a process Doty calls “tedious,” but the result is a steak that cuts like butter.

So is it a bistro or is it a steakhouse? It’s both. “I’m inspired by Belgian and French bistro culture and I pay homage to that, but at the end of the day, I’m from Oklahoma,” Doty tells me on the phone. “We’re always going to be firmly American in what we do.” Overall, the menu is a mashup of French, Belgian, Southern, and whatever other cuisine has personal meaning for him.

There are some missteps. An otherwise tasty burger comes topped with a wedge of grilled lettuce that’s difficult to wrangle, and the whole loup de mer tasted muddy on one visit, like catfish. The sautéed skate wing is an infinitely better choice. Dressed with a brown butter and caper sauce and draped over mashed fingerling potatoes, it’s as decadent as that ribeye.

Service is old school in the sense that the Federal’s waiters give you what you want before you even know you want it. “I’m not looking for the hipster employees,” says Doty. “I’m looking for somebody that has their own life, they have kids, but they come here, and this is their job, and they want to work for me for 10 years. That’s my person.”

Doty, now 47, says Gummere joked that customers might laugh at “the old dude in the kitchen,” but the Federal’s tables are full. At night, when soft yellow light from the Edison bulbs reflects off of the glossy forest-green walls, you’ll feel like you’re in Paris, but you’ll also feel at home. Maybe because Doty is.

Good to know
Shaun Doty’s signature crispy Sardinian flatbread, which diners grew to love first at MidCity Cuisine and then at Shaun’s, is on the menu. 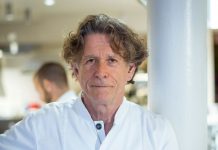