You may have noticed an curious addition to Atlanta’s dessert menus recently: ruby chocolate. Heralded by Belgian chocolate manufacturer Callebaut as the world’s fourth chocolate (and currently available in the U.S. under an FDA temporary marketing permit), this rose-colored confection has a strong chance of becoming the next viral ingredient to fill Instagram feeds. It is millennial pink, after all.

Ruby chocolate is made from pink cocoa beans and has a subtle, berry-forward flavor that ends on a slightly tangy note. But it’s not flavored like strawberry, raspberry, pomegranate or any other fruit. No coloring or flavorings are added; it’s just pink.

Since it was introduced in the U.S. last year, it’s caught on among pastry professionals including several prolific chefs here in Atlanta. Frances Coffey, pastry chef and owner of The Pastry Depot, a pastry product retail store on Atlanta’s west side, says the shop sold out of its first order immediately. “Chefs are curious about it because of the flavor profile, or they think the color is fake.”

Tiny Lou’s pastry chef, Claudia Martinez, debuted her ruby dessert mid-July, and a version of the dessert has been on the menu ever since. Currently, guests will find the “Ruby Forest,” a play on a black forest cake with ruby ganache, cherry sorbet, and toasted pistachios. “Ruby chocolate is so good on its own. I didn’t want to manipulate it that much,” she says.

Like Martinez, Christian Castillo, pastry chef at Atlas in Buckhead, has also spent the past few months experimenting with ruby chocolate. “It’s even more intriguing because it’s a new thing. It has a different aroma, a different taste. It’s very earthy,” he explains. Both chefs were quick to point out that innovation in the pastry world, even beyond Atlanta, feels lacking. A new product like this one allows chefs like Castillo and Martinez to develop their own recipes instead of trying to reinvent the pastry wheel.

Castillo’s ruby concept, dubbed simply, “Ruby,” is on the menu at the Garden Room, Atlas’ popular sister restaurant. Guests will delight in his playful techniques like a bubbly pink aerated ruby chocolate foam with preserved cherries and ruby ganache.

As early adopters, Martinez and Castillo are in a unique position to be able to introduce the ingredient to patrons, as well as other chefs. “I always say that, we have responsibilities as professionals. For me, I think it’s a great opportunity to actually open up and try new things,” says Castillo. “I think the chocolate culture is still growing. There’s a lot more going on besides milk, dark, and white. Where does it come from? Is it nutty? Is it fruity? Chocolate is like wine and coffee.” 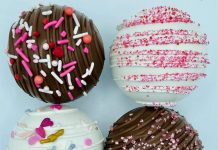