Home Uncategorized Meat is back on the menu at Yeah! Burger

Ten-year-old Westside staple Yeah! Burger is reclaiming some of its original identity. The sustainably focused hamburger joint closed for renovations during the pandemic and reopened in November 2021 as an all-vegan restaurant. Though primarily vegan founder Erik Maier strongly believes in the plant-based approach, the company’s profits decreased, and Maier and team decided to compromise. So last weekend Yeah! Burger quietly went back to serving its original beef-, bison-, and poultry-based menu, with the addition of vegan offerings.

“We had people coming in and saying, ‘Wait, there’s no meat here?’ They just turned around and left,” Maier says. “We underestimated the popularity of—and loyalty to—the old menu.”

Thus, the return of the popular Build Your Own Burger section, as well as sides and salads like the Cobb. Diners can once again get their fix of hamburgers, chicken tenders, hot dogs, turkey burgers, in addition to Beyond Burgers, veggie burgers, and vegetable-forward sides.

“At the end of the day, I have a responsibility to our employees, investors, and stakeholders to run a business that is profitable,” Maier says.

Still, when Yeah! Burger announced the change on its Instagram feed March 1, it faced some backlash: “Wow that sucks. Once again a company chooses money and profit over making the ethical choice,” posted one user.

“There are still not a lot of burger brands that are as sustainability focused as we are. Our grass-fed and organic options are much more environmentally friendly than the conventional factory-farmed products,” he says. “Even with the animal products, I’m still proud of Yeah! Burger. It was my first restaurant.” 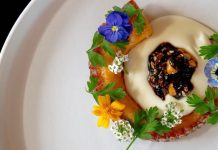