When Anthony Spina opened O4W Pizza on Irwin Street in 2015, the restaurant’s grandma pie—a square-shaped pizza topped with marinara, mozzarella, pecorino, and basil, and cooked in a cast-iron pan—quickly became the breakout star. The pie moved to Duluth with the restaurant in 2016, and many ITP fans were heartbroken when they learned grandma wouldn’t be on the menu at Nina & Rafi, Spina and Billy Streck’s new BeltLine-adjacent restaurant that’s a stone’s throw from O4W’s original location. “We didn’t want Nina & Rafi to be defined by one pie,” Streck told us in January. Spina also noted that the pans used to create the pizza were increasingly difficult to find.

But, as the duo promised in January, the grandma pie will occasionally visit Nina & Rafi for one-night-only pop-ups, the first of which will be Monday, March 11 from 5-11 p.m. Spina will be making the pies “while supplies last,” so plan to arrive early. Nina & Rafi isn’t taking reservations and the pies are only available for dine-in customers. 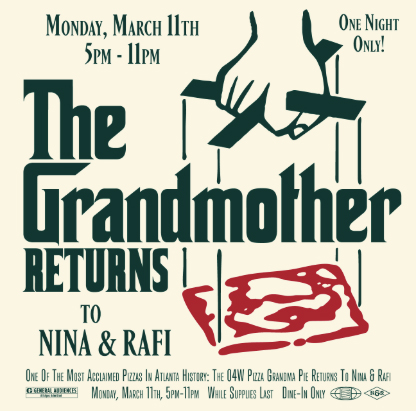 Nina & Rafi decided to go with The Godfather as the night’s theme—a graphic cheekily promotes the event as “The Grandmother Returns”—and will serve a special Corleone Float cocktail—a Coke float made with butter pecan gelato, spiked with amaro, and served with bourbon-spiced pecans and Luxardo cherries. They’ll also offer specials on amari.