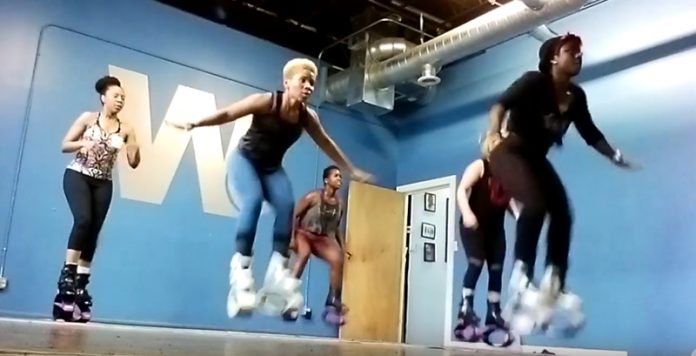 “Your booty is percolating!”

Is that a compliment? I’m not sure. Maybe, since she’s smiling as she shouts it over the thick bass beat. Her name is Fiyastarta — not her real name, of course, more of a nom de pole—and she’s leading me and three other women through the ATLBounce class at Vertical Joe’s, a pole-dancing and fitness studio in northwest Atlanta.

We’re all wearing Kangoo Jump Boots, which look like rollerblades, but instead of wheels on the soles there are half-moon-shaped tension springs. When you stand still you have to balance, and when you move you have to bounce. I first saw the boots several years ago, on a guy who would run through downtown Atlanta on them every day, bounding through traffic like a hurdler on hydraulics. Not sure what happened to that guy. Perhaps he bounced too close to the sun.

The boots, which retail for about $250, were first developed to give runners a lower-impact workout, then found their way into aerobics studios. The health benefits, according to Kangoo, are astounding: stronger musculoskeletal systems, less chronic fatigue and joint pain, better lymphatic circulation, healthier tissues, and even a perkier face (the company says that as you bounce, your skin cells try to resist the increased gravitational force, which causes the membranes to firm up, creating a kind of mini-facelift).

One study did show that novice runners who used “footwear with a cantilevered spring system” had fewer injuries than those who used conventional footwear. But otherwise there’s not much scientific data to back up Kangoo’s claims. Some fitness pros even warn against using the boots, saying that when you restrict the mobility of the ankles, you put undue strain on the knees and other joints.

Does any of this worry me, as I buzz through the door at Vertical Joe’s at the WE Entertain complex on Jefferson Street? Nope. I’m too busy picking out my alter ego for the $25 workout. My classmates are Black Mamba, Blaze, and Prissy Power. My name, I decide, will be Vanilla Spice.

I slide into some pink and black Kangoos, which cinch closed like ski boots around the shin and ankle. Then Fiyastarta helps me wobble to standing. I soon figure out that as long as you don’t lean too far forward or too far back you won’t end up on your butt.

We totter into the mirrored dance studio, where Fiyastarta cues up the Fetty Wap and warms us up with some bouncing, jumping jacks, shuffles, and grapevines. Then we learn three fairly simple dance combinations. Fiyastarta says we’re burning as much as 20 calories per minute, and I believe it — my heart rate is up and I’m sweating hard from all the boinging, squatting, and kicking (the boots feel heavier than their 2 1/2 pounds). But I’m also smiling, because even though I look a little bit like a clumsy acrobat on tiny stilts, I’m having fun and getting an awesome workout. I am, for this hour, Vanilla Spice, and I am working it. My booty is percolating.