Home Restaurants Final Fork: Who made it to the ‘Elite Ate’? 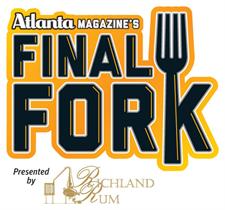 It’s time for the fourth round of our Final Fork contest, which brings us one step closer to voters determining Atlanta’s favorite restaurant.

Since the only thing I know how to do is elucidate my personal opinion on these restaurants in an all-too-explicit attempt to manipulate y’all into voting for my favorites, here’s my take on our Elite Ate:
1. You’ll recall how I feel about Holeman. Even though I was rooting for the Porter, I’d still make the half-hour trek from my Downtown apartment to Brick Store. Just to spite Holeman. Because I’m spiteful when it comes to drinking.
2. You may also remember that while I love Bacchanalia, I’m not a huge fan of ’em. Plus, I adore Canoe. And I like to root for the underdog. The flood survivor is my obvious pick.
3. Antico forever.
4. That just leaves our Southern bracket, which was the only difficult decision for me. I have a semi-tradition of going for Sunday Supper at JCT around my birthday. It’s also Ford Fry’s first restaurant, which given my love for the Optimist I find somewhat special. Then there’s Empire State South, which consistently ranks in my top three restaurants in the city, along with Miller Union (robbed!) and One Eared Stag (unfair disadvantage!). And ESS’s chicken biscuit with pimento cheese and bacon? No better breakfast in town. I won’t say which one won out for me; I’ll let you make up your minds on your own, if only for this particular matchup.

But what do you think? What is your gut telling you? Cast your vote before Thursday at 11, and be entered to win one of our sweet prizes, including a Big Green Egg, a bottle of Richland Rum, and a $100 gift certificate to the Final Fork restaurant of your choice. Learn more about the prizes here.