Culinary students may still squeeze themselves into the stiff white chefs coat, long the industry’s de rigueur uniform. But the new must-have garb, particularly among Atlanta’s male chefs who have made it to the top of the food chain, is the designer apron.

Fashionable and functional, the next-gen cooks apron takes its style cues from protective gear worn by hunters, gardeners, butchers, and carpenters. And it’s a far better choice for making a statement than a silly towering toque.

Zachary Meloy
Better Half
Local clothing designer Shannon Johnson made this apron using scraps of vintage ticking, copying a traditional Japanese pattern with broad straps that cross in the back.

Angus Brown
Octopus Bar
Brown—who opens Lusca with partner Nhan Le this spring—is working with a local seamstress on his own apron line. Note the X on the right shoulder, Brown’s signature touch.

Todd Ginsberg
The General Muir
A classicist, Ginsberg wears a long, bib-style apron made by chef apparel company Bragard USA. He keeps a neat stack of them in his car’s backseat.

This article originally appeared in our April 2014 issue under the headline “Strings Attached.” 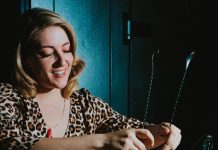 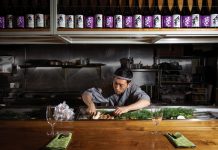